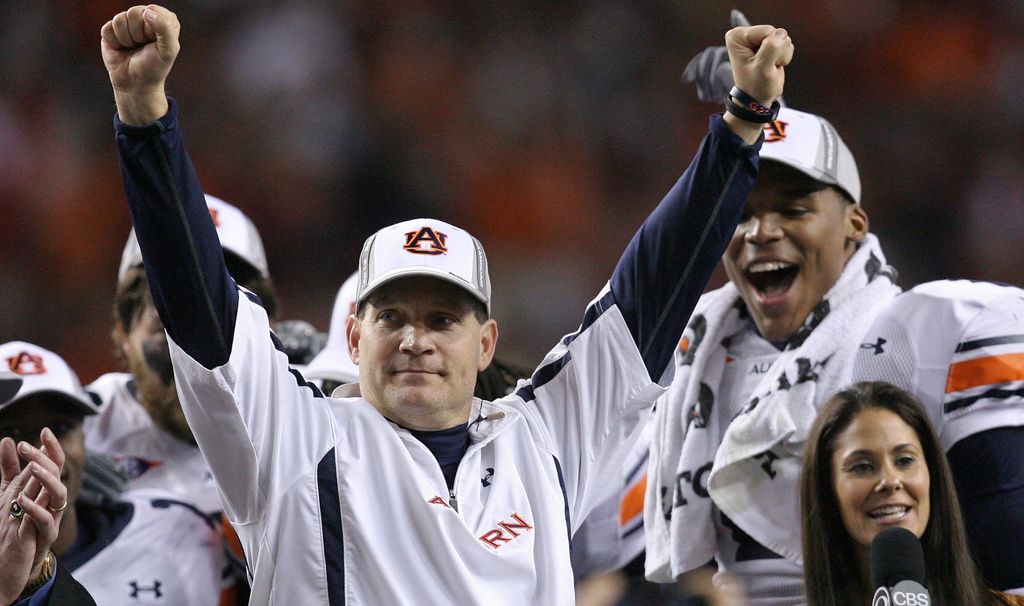 We all know about $cam Newton … but the University of Auburn was absolved of any wrongdoing in that case, right?

“Any allegations of major rules violations must meet a burden of proof, which is a higher standard than rampant public speculation online and in the media,” the NCAA concluded in the Newton case, meaning Auburn was allowed to keep its 2010 national title (and Newton was allowed to keep his Heisman Trophy).

Two years later, though, Auburn is at the center of another alleged scandal – this one broken via a sprawling exclusive report by journalist Selena Roberts (formerly of Sports Illustrated and The New York Times).

Roberts’ story – “Auburn’s Tainted Title” – is chock full of allegations against the program run by Gene Chizik, who was fired following a disastrous 3-9 campaign in 2012 (but received a $7.5 million buyout from the school). In fact the allegations extend several years prior to Chizik’s hiring – with current Florida head coach Will Muschamp named as one of the alleged violators (Muschamp was Auburn’s defensive coordinator in 2006 and 2007). 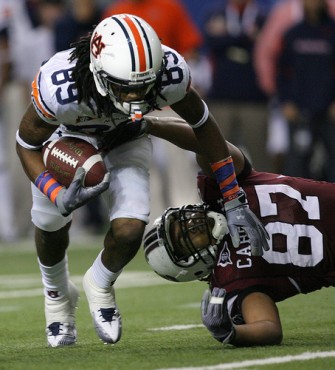 Among the charges? Academic fraud, payments to players, recruiting violations and rampant drug use and criminal behavior on the part of student-athletes – before, during and after the school’s championship season.

“Auburn football operates as an underground society beneath the NCAA’s radar,” Roberts writes, calling Auburn a “program going off the rails.”

Among the most damaging allegations? That former Tiger running back Michael Dyer – the offensive MVP of Auburn’s championship victory  – should have been ineligible to play in the title game due to academic issues. In fact as many as nine Tiger players may have had their grades changed to ensure their eligibility in the game – which Auburn won 22-19.

If proven true, such allegations would obviously cost Auburn its 2010 title – breaking up a string of seven straight national championships for the all-powerful Southeastern Conference (SEC).

In addition to the allegations involving grades, Roberts’ report details allegations of payments to players.

Specifically former wide receiver Darvin Adams – who was recently signed by the Toronto Argonauts of the CFL – says the school offered him money in exchange for his decision to return to the program following its championship win.

The report quotes several former players in making its allegations, although two of them – former defensive lineman Mike Blanc and former defensive back Nieko Thorpe – are now claiming they were misquoted.

Meanwhile Chizik and Muschamp both denied the allegations made against them.

“Ms. Roberts’ story is long on accusation and inference, but short on facts and logic,” Chizik said in a statement. “It is noteworthy that the story comes just days before a player mentioned most prominently in the article is set to go to trial for felony armed robbery. The statements are very generalized accusations devoid of substance.”

“During my time as Auburn’s head coach, I never authorized, instructed or directed anyone to change any player’s grade or provide any type of illegal payment to any student-athlete,” Chizik’s statement continued. “Likewise, I am not aware of any alleged grade change or illegal payment by any member of my coaching staff, support staff or anyone else.”

Muschamp addressed the allegations against him in an interview with The Gainesville (Florida) Sun.

“Totally deny it,” he said. “I don’t know where this is coming from.”

Pay-to-play allegations are nothing new at Auburn. In 2011, four former players – Stanley McClover, Chaz Ramsey, Troy Reddick, and Raven Gray – told HBO they were paid to attend the school. None of the players were willing to talk to the NCAA, though, and so the charges didn’t stick.

Auburn went 14-0 in its championship season – but the program has slipped in the last two seasons. Last December the school hired its former offensive coordinator Gus Malzahn to replace Chizik. Malzahn was not mentioned in Roberts’ report, incidentally, although he was Auburn’s offensive coordinator from 2009-11.

UPDATE: In addition to Roberts’ story, ESPN has a separate report detailing the extensive drug issues facing the program.