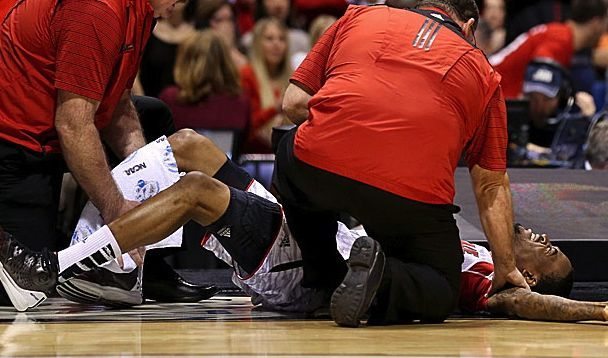 We don’t do gruesome injuries. It’s not that we’re faint of heart, we’d just prefer not to watch them.

Of course while exercising our right not to rubberneck, we don’t understand the “to show, or not to show” debate which occurs every time an athlete sustains one of these jaw-dropping, spine-chilling hurts – like the nausea-inducing compound fracture suffered by University of Louisville guard Kevin Ware in the Cardinals’ Elite Eight victory over the Duke Blue Devils this weekend.

For those of you who do watch these injuries … (warning, this one is extremely graphic) …

First things first: Our thoughts and prayers go out to Ware and his family – as well as to his teammates, who were somehow able to channel their emotions and blow out Duke to advance to the 2013 Final Four.

Next: As of this writing Ware is headed into surgery, and as soon as there’s any news on his status we’ll update this post with that information.

Now … as to the debate raging about whether television networks ought to replay such injuries, we are firmly in the “replay” camp – even though we don’t (and won’t) watch them. Why? Because accidents happen. And when they do, people are going to rubberneck. And this is – for the time being – a free country, not to mention a free market.

Last time we checked people reserved the right to look away … or change the channel.

We were watching live on October 1, 2005 when University of Alabama wide receiver Tyrone Prothro suffered a complete fracture of both the tibia and fibula in his lower left leg during a 31-3 victory over the Florida Gators. That was the worst injury we had ever seen – until October 27, 2012, anyway, which is the day University of South Carolina running back Marcus Lattimore suffered a catastrophic knee injury against the Tennessee Volunteers.

We watched a few of the Prothro replays but only watched the Lattimore replay once before vowing to never watch it again. It was just too terrible.

“That was the worst injury I have ever seen,” former University of South Carolina linebacker Anton Gunn said of Lattimore’s dislocated knee. ”I have tears in my eyes for him.” 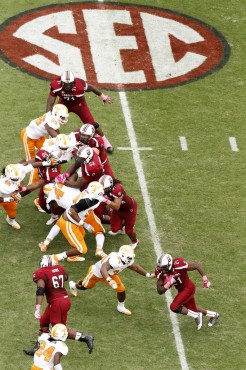 Prothro’s story did not have a happy ending. Despite multiple surgeries and rehabilitation attempts – he never played football again. Lattimore on the other hand is way ahead of schedule in his rehabilitation efforts and is likely to recover in time to play in the NFL next season.

What will be Ware’s fate?

We’ll have to wait and see … in the meantime, though, we continue to believe networks can (and should) replay these injuries as they see fit.

UPDATE: According to The Louisville Courier-Journal, Brown’s bone was reset and a rod inserted in his right tibia. Meanwhile the wound to his leg caused by the bone puncturing the skin was closed. Doctors have not indicated a timetable for his recovery, although they said the injury was not considered “career-threatening” at this point.