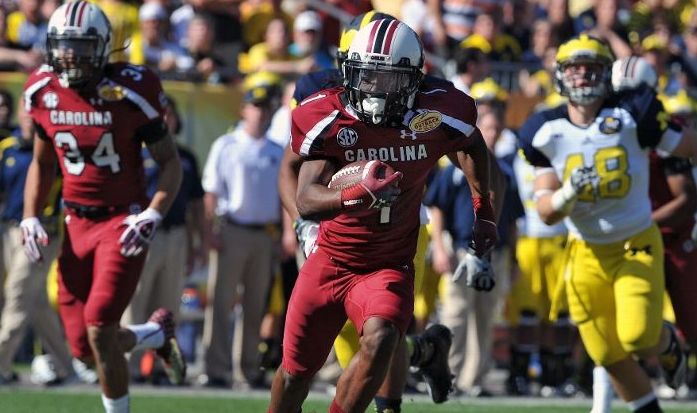 University of South Carolina backup quarterback Dylan Thompson hooked up with two-sport star Bruce Ellington for a 32-yard touchdown pass with 11 seconds left – lifting the tenth-ranked Gamecocks to an electrifying come-from-behind victory over the No. 18 Michigan Wolverines in the 2013 Outback Bowl.

South Carolina – which recorded double digit wins just once in its first 117 years of football – has now won 11 games in back-to-back seasons.  The Gamecocks (11-2, 6-2 SEC) are also likely to earn their second consecutive Top Ten finish – another honor that had eluded the program until its recent run under head coach Steve Spurrier.

Thompson – who lifted USC to a convincing win over arch-rival Clemson two months ago – reentered the game on the final drive of a thrilling, see-saw contest that saw multiple lead changes all the way down to the wire.  He came in for injured starting quarterback Connor Shaw, who moments earlier had converted a critical fourth down play to wide receiver Ace Sanders that kept the Gamecocks’ bowl-winning drive alive.

Sanders had whale of a game – catching nine passes for 92 yards and a pair of scores.  He also returned a punt 63 yards for a touchdown in the first half – extending his school record for punt return yardage in a season.

Shaw completed 18 of 26 passes for 224 yards and two touchdowns against Michigan – not a bad effort when you consider the Wolverines’ defense hadn’t surrendered more than 200 yards through the air all season.  Thompson was every bit as effective, hitting on seven of nine throws for 117 yards and a pair of touchdown strikes.  Neither USC quarterback was intercepted.

“Both those young men are just so super team-oriented,” Spurrier said after the game.  “There’s no jealousy, nothing. Those guys are just really, really good teammates. Wonderful team players.”

Defensively, the star of the game was none other than All-American defensive end Jadeveon Clowney – who forced and recovered a fumble deep in Michigan territory midway through the fourth quarter after the game’s Big East officiating crew erroneously awarded Michigan a first down following a fake punt.

Of course when we say Clowney “forced and recovered a fumble,” those words don’t adequately describe what the sophomore sensation did to Michigan running back Vincent Smith.

And yes, the last time we checked Smith’s helmet was reentering the atmosphere somewhere over the Gulf of Mexico.

Clowney’s seismic hit – and one-handed fumble recovery – was quickly the talk of the college football internets.

Prior to laying the wood on Smith, Clowney had been pretty well contained by All-Big Ten offensive tackle Taylor Lewan – who was recently pegged by Sports Illustrated as a top five pick in the 2013 NFL draft.  But it only took just one play for the 6-foot-5, 260-pound lineman to make good on his pre-game promise to “start (his) 2013 Heisman campaign” against the Wolverines.

“No he doesn’t hit that hard in practice,” Spurrier said after the game.  “We have a rule, don’t clobber teammates.”

Clowney’s hit also paid immediate dividends, as Shaw hit Sanders for a 31-yard scoring strike on the very next play from scrimmage – giving USC a 27-22 lead with eight minutes left in the game.  A much less violent instant replay showed Sanders maintaining possession of the football prior to tiptoeing the back line of the endzone …

Michigan – which trailed USC until the last play of the third quarter – refused to back down, though.  Led by quarterback Devin Gardner and all-purpose star Denard Robinson, the Wolverines embarked on a 10-play, 64-yard smash mouth scoring drive that gave them the lead with only 3:29 left in the game.  Michigan’s drive was capped by wide receiver Jeremy Gallon’s second touchdown catch – a perfectly thrown 17-yard strike from Gardner.

Gallon finished with nine grabs for a season-high 145 yards.  Meanwhile Gardner completed 18 of 36 passes for 214 yards and three touchdowns.  He also ran 12 times for 24 yards.  Robinson – in his final game as a Wolverine – rushed 23 times for 100 yards.  That gave him 4,495 rushing yards for his career – with him accumulating most of those yards as Michigan’s starting quarterback (a job he relinquished to Gardner earlier this season).

Trailing 28-27, the Gamecocks had one last opportunity – and unlike so many USC teams of bygone eras – they seized it, going seventy yards in 11 plays for the game-winning score.

Go cocks! They can really penetrate!

What the fuck was the final score.
why the hell is it so hard to find out the score of a game that one does not actually watch?

THERE THEY GO AGAIN! Great comeback-

Now thats how a elite program rolls. As usual the Gamecocks had to play well enough to account for the poor officiating. Should really help w/ recruiting.

Then: SC Upstaged the F^&k out of Your BIGGEST win in your Little League Program’s History….So STFU…P!$$-Ant…

PS: Where is that Idiot Half-Wit RT who you sucked off when he BASHED JD…????

A man with an unwanted opinion on everything: BigT! How’s it feel to be jaded 24/7?

Did FITS, or did he not BASH JD threough the Idiot RT???

Also: He was soiling himself over Clemson’s joke win over a very poorly prepared LSU team…while he has Taken Shots at Sc ahd Spurrier…

There’s a rumor that Fits is going to limit each of us to posting only 1,000,000 words this year.

This means that we won’t be seeing BigT after February 4, 2013 – “National Create A Vacuum Day”

And: Spurrier Thanked Clemson for beating LSU, because it moves SC up in the polls…

Don’t empty your bucket too soon – we’ll be missing you.

Man you liberals are weak on creativity…to claim to be the best and brightest all the time…No wonder you idiots have to take orders from the DNC….or you would not have any talking points…

All the while the RNC are talking to empty chairs?

Well, BigT, you are really pushing the envelope here. If you control yourself you could:

But you definitely won’t get beyond:

Joke win over LSU? Read this now BigoT: in football terms, the upstate of South Carolina is under a “winter storm watch”. Dabo is a great recruiter and he now has a signature victory under his belt. Maybe the watch becomes a warning, maybe not. We will see.

I also watched the SC/Michigan game….Hats off to SC. Great game. But if Michigan could defend a post pattern, we are not having this conversation.

Sanders had to be MVP no matter what TV announcers said….Clowney got the hype all day, but did not earn it today. Yes, he came up with an outstanding play in latter moments of game. But he had 4 tackles today and most of game looked frustrated and uninterested. He is a great player, but Ace Sanders kept the Cocks in range today.

I agree with you.Clowney played a good game,but not a great one .However,when youre being hailed as a numero uno NFL draft pick?Good things happen to you!

Clowney was doubled an and tripled all game in addition to being held and repeatedly facemasked.

Well both teams won, so 335 days of sniping and anger, just as it should be.

Clemson’s win was bigger. But both got a W in tough entertaining games. I enjoyed watching both. Ace was just amazing, Bruce was great. JD was a beast and was held every damn down.

When was the last time the State finished with two teams in the Top Ten.

Let the Tautological record read that USC beat the team, that beat a team, that USC lost too.

No way that Taj or Nuk should come back. They may never play that well again against a quality opponent.

Marcus showed that the game can be cruel, best to get paid while the scouts have those throws and newly proven toughness in mind.

OBC has what he loves best, a good two QB race for next seasons starter. Conner has never been the same QB he was in the UGA game.

Stop making me look up new words that I don’t know. However, in this instance, it is beneficial. Now I know what the “T” represents as in “BigT” – TAUTOLOGY!

Clowney’s hit was helmet to helmet. How else do you explain the helmet launching off his head?

I think this video will go viral and in future years be like the one of the down hill skier in the Olympics wiping out and tumbling over and over.

What is amazing is this hit did not come from a player who had momentum over a long distance. Clowney exploded like a coiled spring and hit the guy like a cannon shot. The NCAA will probably change the rules and require him to wear a license plate on his back or some sort of Hazardous Label like: Dyno-Mite!

BigTwat- My day isn’t ruined, and I’m not a Clemson fan. Just not a life can’t go on without USC Gamecock fan.

Big difference in the 2 games:

Clemson was by far the inferior team on the field, but just got lucky because LSU did not show up….and quit in the end in a pre-NYD bowl…..

SC was the best team on the field, but played very poorly versus a team playing their Game of the Decade…but SC found a way to win: as great teams do…

Clemson’s win will mean very little in the Long run, except to the media and idiots like Dabo.

The ACC will be the same Joke again in the 2013 season…while SC will be in the Conversation, where it belongs….

He’s a good coach but is old-fashioned and his once-innovative style has been bettered by many others.

It would have been news if SC lost today to a Big-10 team. Damned if they almost didn’t.

Clemson is picking up all the recruits with the Coach’s young edge.

To help BigT survive this year by having some special days for him to look forward to (mark your calendar!):

November will be exciting for BigT, because:

I thought this son of a bitch BigT said he wouldn’t post here anymore if Obama won. I’m not sure why he does….he has the lowest credibility of all posters here (honorable mention to Sid) and folks sorta hate him, even though it’s quality entertainment.

Well, I guess that when he is posting here then at least he’s not out on the streets bugging folks in person for who knows what. That’s a good thing.

Fitness Clemsux has won only 11 games in year in their history. I believe one was in 1980 when they sold their soul to the devil with recruiting cheating unmatched by SMU which was closed down for a few years. The other time clemSUX won 11 games was this year when they played the likes of WF, NC State, Boston College, Duke, Maryland, Ga Tech, Ball State, Auburn, Wofford and, of course Fl State and USC (which they lost big time). Give them credit for beating an unprepared LSU with a vanilla offense and a QB who predictably could not pass or run the ball. But, my point is why only mention USC when it comes to two 11 win seasons? Granted, USC’s were back-to-back. But,I think 4 in a row back-to-back over the mighty TIGS with a 5th on the horizon is something to be prouder than two 11 game win seasons. GO COCKS. P.S. Our coach, Steven Orr Spurrier, does not cry and whine and shout after a good win. Guess, he has been there many times before unlike another coach in the upstate.

Will somebody please explain to me what that official was thinking when he said that Michigan got that first down when everyone standing there and however many were watching on TV could clearly see that it wasn’t?

If no one wants to take a stab at, please at least tell me what that USC message board is so I can go there and read some opinions.

HAI
If you dont watch it why ask about the score?

I saw the game and it was a cliffhanger. Go Carolina !