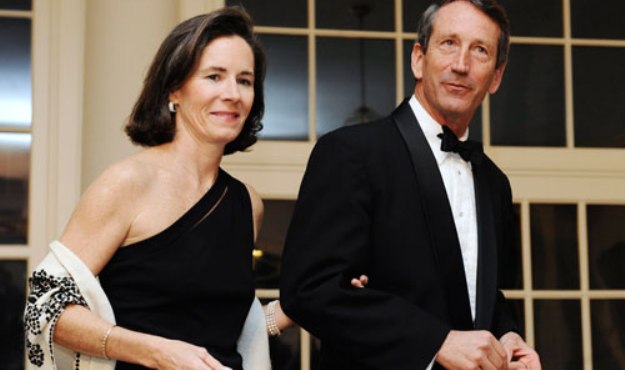 In years past former S.C. Gov. Mark Sanford and his wife Jenny would send cute Christmas cards to thousands of South Carolinians on their campaign mailing list. These annual greeting always featured an updated family photo, a Bible verse (selected by Mrs. Sanford) and a brief recap of what the couple’s four boys had been up to over the prior twelve months (written by Mrs. Sanford).

This endearing holiday tradition came to a screeching halt three years ago when Mark Sanford took his infamous “hike along the Appalachian Trail” – torpedoing his promising national political career and nearly getting thrown out of the South Carolina governor’s office in the process.

Obviously this was due to the fact the governor wasn’t hiking the trail – he was in Argentina with his Latin lover, Maria Belen Chapur, which he tearfully copped to at a rambling press conference at the S.C. State House in June 2009.

Not content with the initial damage done to himself and his family, Sanford compounded his problems by perpetually oversharing about his feelings for Chapur – and nearly lost his job as a result of an ensuing ethics investigation into his travel practices as governor.  Among other abuses, Sanford’s Commerce Department spent tax dollars on a 2008 South American “economic development” trip during which the governor had a romantic rendezvous with Chapur.

Sanford ended up reimbursing taxpayers for this trip and paying $74,000 in fines associated with his various violations.  He was also censured by state lawmakers – but avoided impeachment.

What didn’t he avoid?  Getting divorced – and having his wife turn the whole “woman scorned” thing into a cottage industry.

Well guess what South Carolina, whether you like it or not “As The Sanfords Turn” is back – with a vengeance.

Within the last month, Jenny Sanford made a five-person short list for a soon-to-be vacant U.S. Senate seat.  Meanwhile her ex-husband has signaled his intention to run for the U.S. Congressional seat he held from 1995-2001 – an office Jenny was also rumored to be eyeing.

The Sanfords have been over then the news, in other words …

But behind the barrage of public headlines generated by reemergence of these two political animals, a private drama has also been playing out between the former couple – a soap opera which our sources say took a turn for the bizarre over the Christmas holidays.

The latest scene?  A less-than-cordial face-to-face meeting between former governor and his ex-wife just prior to Christmas Day.

“Mark asked to see Jenny to talk about Christmas arrangements involving the boys,” a source close to the former S.C. First Lady tells FITS. “Jenny told Mark they could talk by phone but he was adamant that they speak in person. She declined. He persisted. She eventually gave in.”

When Sanford came by his ex-wife’s house for their conversation about holiday visitation, we’re told it quickly turned into a discussion about his desire to run for his old seat. Needless to say, Jenny was not keen on the notion.

“She asked him not to (run), not to put her and the kids through that,” our source says.

Not only did he insist on jumping into the race, he actually asked her to reprise her role as his campaign manager (Jenny Sanford ran each one of her husband’s successful congressional and gubernatorial campaigns from 1994-2006).

“She was floored by the request,” our source says. “Her jaw hit the floor.  It was salt in the wound after she begged him not to jump in.  A total slap in the face to her.”

So who is running Sanford’s race?  According to our sources he’s working with former campaign staffer Jason Miller.  He’s also said to have retained Donehue Direct, the political consulting firm that employs his ex-spokesman Joel Sawyer.

“Team Mark” faces an uphill climb.  According to a new Public Policy Polling (PPP) survey released last week, fifty-three percent of South Carolina voters have a negative opinion of Sanford compared to just 30 percent who view him in a favorable light.  Among Republicans, 44 percent view him unfavorably compared to 39 percent who have a favorable impression.