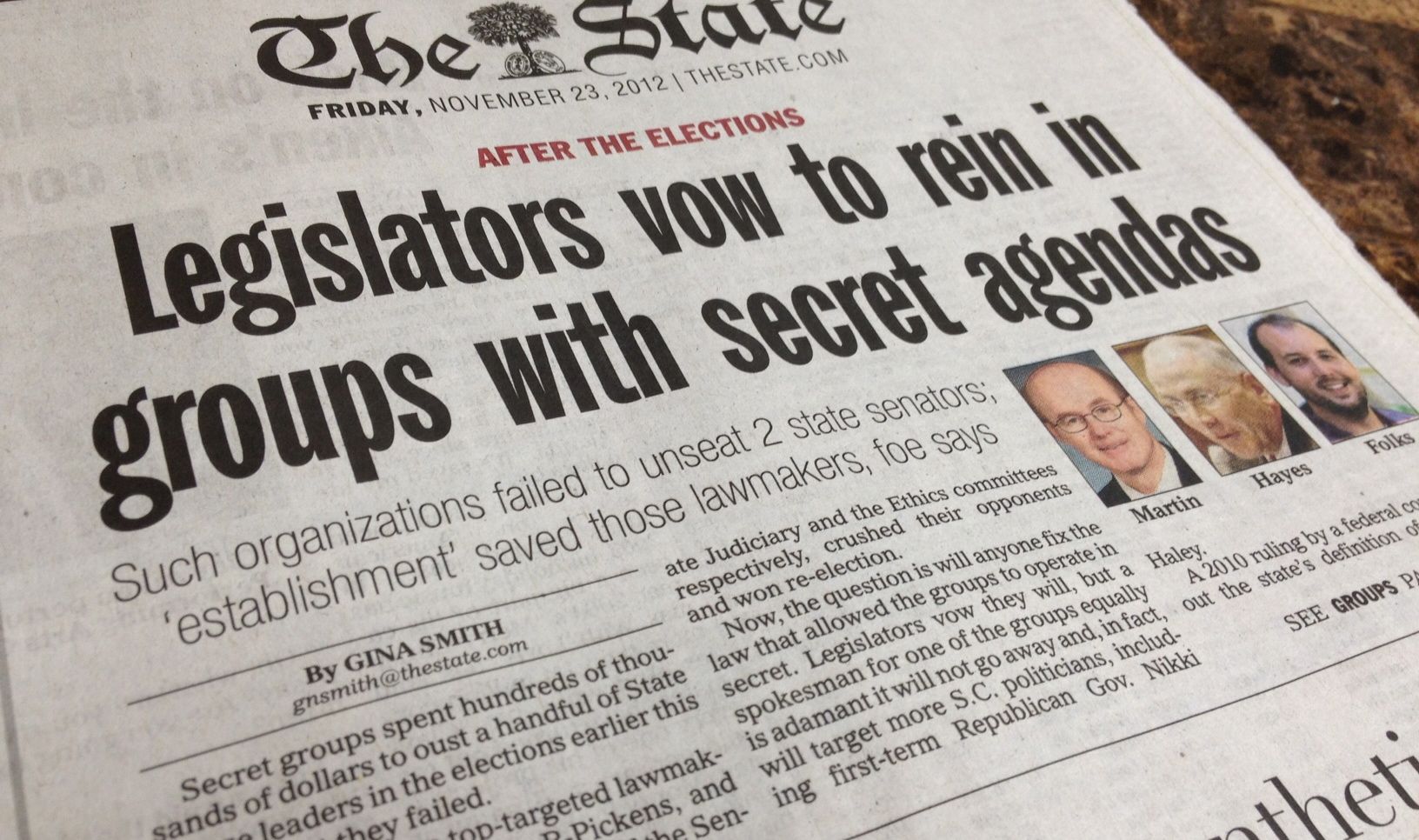 Selective journalistic outrage is nothing new in the Palmetto State.

Here, status quo politicians (invariably “Republicans”) who perpetuate South Carolina’s anti-competitive business climate, worst-in-the-nation public schools and totally dysfunctional system of government get hall passes for the chronic failure of their efforts … while those of us calling them out for their corruption and incompetence get fitted for black hats.

The latest example of this trend?  A front page story in La Socialista – a.k.a. The (Columbia, S.C.) State newspaper – which advances the “kill the messenger” narrative being promoted by these fiscally liberal politicians.  The story – written by reporter Gina Smith – decries the “secret groups” with “secret agendas” that ran ads against State Senators Larry Martin and Wes Hayes this year.

In La Socialista‘s world it’s apparently okay for politicians to award themselves lavish benefits that aren’t available to other government employees (and repeatedly fail to disclose these benefits) – but it’s inappropriate for people like this website’s founding editor to criticize them for doing so.

In fact these big-spending, benefit-loving lawmakers – who for years have failed to pass tax relief, market-based education reforms and real government reform – are now joining forces with S.C. Gov. Nikki Haley in an effort to pass legislation aimed at silencing these groups.  And unlike reforms that would benefit your bottom line you better believe that this gag law is going to sail through the S.C. General Assembly.

Haley, incidentally, endorsed Martin’s reelection bid – throwing her support behind the left-leaning former Democrat at a critical point in his campaign.

Wait … why is Haley (who ran for governor in 2010 as a “Tea Party” candidate) now supporting a bunch of fiscally liberal incumbents?  Seriously … didn’t she promise voters that she “wouldn’t stop” until our state had a “more conservative” S.C. General Assembly?

Such is life in South Carolina, though, where politicians habitually say one thing and do another – and the mainstream media lets them get away with it.  Hell …  Smith’s story attacking these evil “secret groups” ran just above a puff piece about a government-funded ice skating rink (located in front of a government-funded museum) in downtown Columbia, S.C.

Because why wouldn’t the media praise government subsidize ice skating along with special retirement benefits for State Senators who haven’t even retired yet?

Sadly, we should expect to see more of this waste and unnecessary spending as politicians continue receiving cover from the media outlets that are supposed to be holding them accountable.