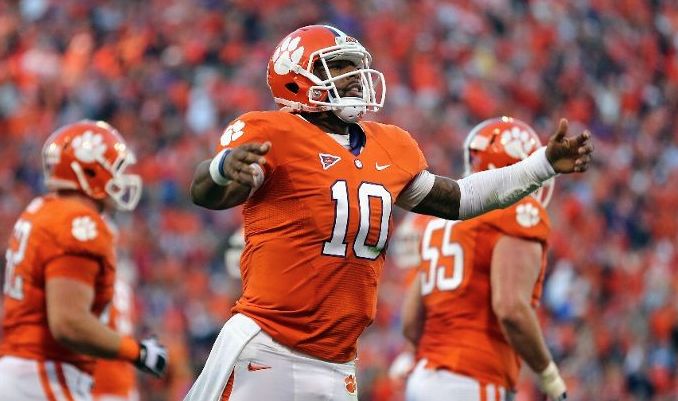 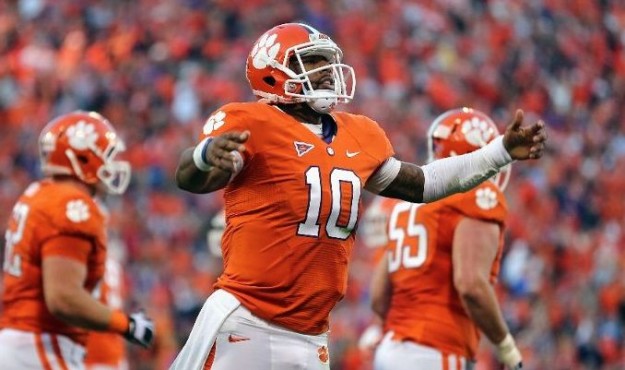 Clemson University’s football team put on an offensive clinic against the N.C. State on Saturday – racking up 62 points and 754 yards of total offense as they avenged last year’s embarrassing loss to the Wolfpack.

Five hundred and twenty-nine of those yards (and eight touchdowns) came courtesy of junior quarterback Tajh Boyd – who broke school records in both categories.  Boyd completed 30 of 44 passes for 426 yards and five touchdowns.  He also ran for 103 yards on eighteen attempts – scoring three touchdowns on the ground.

Over his last four games – all lopsided Clemson wins – Boyd has thrown for 1,459 yards and 18 touchdowns.  In the process, he’s entered the Heisman Trophy conversation – ranking No. 9 on the most recent ESPN list.

Astoundingly, Boyd – the ACC’s leading passer – wasn’t the best quarterback on the field at Death Valley on Saturday.  N.C. State’s Mike Glennon completed 29 of 53 passes for 493 yards and matched Boyd with five scoring strikes.  In fact N.C. State looked like it would run away with the game early on – racing to a 24-13 lead over Clemson in the second quarter.  Of course that’s when the Tigers reeled off 42 unanswered points – turning a potential upset into another Clemson blowout.

Clemson (10-1, 7-1 ACC) missed out on a shot at the ACC Atlantic Division championship when Florida State defeated Maryland on Saturday, but the Tigers could still wind up with an at-large Bowl Championship Series (BCS) bid if they can defeat arch-rival South Carolina at home next week.

Head coach Dabo Swinney’s Tigers need a signature win against an elite SEC program given the weakness of the ACC schedule they play.  While Boyd and the rest of the Clemson offense have put up gaudy numbers all season – they’ve done it against inferior competition.

A win over Steve Spurrier’s ninth-ranked Gamecocks in this year’s “Backyard Brawl” would not only silence the critics – it would end three years of frustration against their in-state rival.