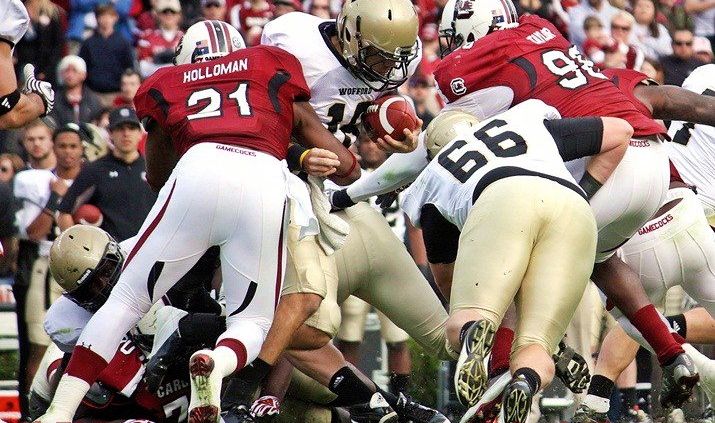 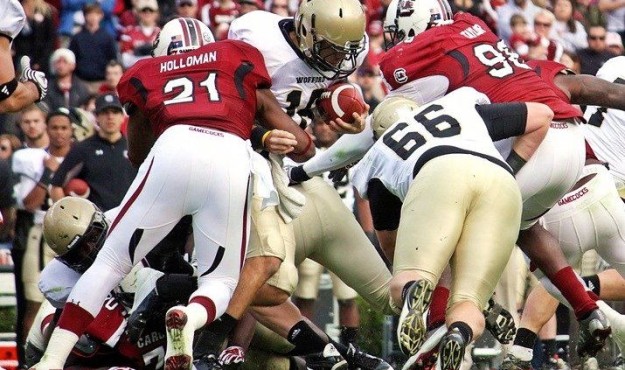 GAMECOCKS PULL IT TOGETHER LATE TO BEAT WOFFORD

Yet this rivalry – in which Wofford ought to be collecting a nice paycheck for the indignity it suffers at the hands of a superior opponent – continues to prove that size doesn’t matter.  Especially not when the “big boys” play sloppy.

In 2006, USC withstood a late rally to preserve a 27-20 win over the Terriers. In 2008, the Gamecocks needed a late touchdown to secure a 23-13 win.  This year?  Head coach Steve Spurrier’s squad once again went down to the wire against Wofford – entering the fourth quarter of Saturday’s game tied 7-7.

And while South Carolina (9-2, 6-2 SEC) managed to reel off 17 unanswered points to claim a 24-7 win – Gamecock fans can’t be pleased with their team’s performance.  Wofford actually managed to put up 330 yards of offense to the Gamecocks’ 293 – but were done in by three turnovers at crucial moments of the game.

“This game was about like every time we’ve played Wofford,” Spurrier said. “It was very close and then something good happened for us in the fourth quarter.” 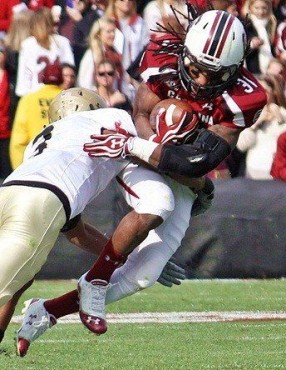 A 31-yard fumble return for a touchdown by senior cornerback Akeem Auguste that finally put the Terriers (8-3, 6-2 Southern Conference) down.  Auguste was one of twenty-nine seniors playing their final home game at USC.  Another?  Kenny Miles – who ran for a career-high 127 yards and one touchdown on 27 carries.  Miles also caught four passes for 27 yards.

“He’s always been a good back here,” Spurrier said of Miles.  “His average per carry is very good. It’s probably the best of all the backs that played here.”

“He can catch it and run with it and block,” Spurrier added. “He’ll get a chance in the NFL, somebody is going to give him a chance, and maybe he’ll even be drafted in the middle rounds.

With the win, Spurrier tied Rex Enright’s school record of 64 wins.  If he can get a fourth consecutive victory over arch-rival Clemson next week, Spurrier would become the Gamecocks’ winningest coach of all-time.  In addition to his 64 victories at USC, Spurrier won 122 games from 1990-2001 at Florida and 20 games from 1987-89 at Duke.

After posting a 35-28 record through his first five years at USC, Spurrier’s teams have gone 29-9 over the last three seasons.

South Carolina is looking to equal its school record of 11 victories – set last season.  To do that, they’ll have to contain a Clemson offense that put up 62 points and 754 yards against N.C. State this weekend.  Then they’ll have to win a second consecutive bowl game against a top tier opponent.

USC will get superstar defensive lineman Jadeveon Clowney back in the lineup next weekend against the Tigers.  The 6-foot-6, 256-pound Lombardi and Nagurski Award finalist missed this weekend’s game with a sprained foot.

“He couldn’t play, he couldn’t practice all week,” Spurrier said of his talented sophomore.  “He was hurting. Hopefully he’ll be ready Wednesday or Thursday.”

Picking up the slack for Clowney on defense was senior D.J. Swearinger – who recorded a career-high 12 tackles in his final home game at USC.  Swearinger also forced -and recovered – a fumble.  Seniors Shaq Wilson and Byron Jerideau also went out on a high note in their final home games – recording ten tackles apiece.