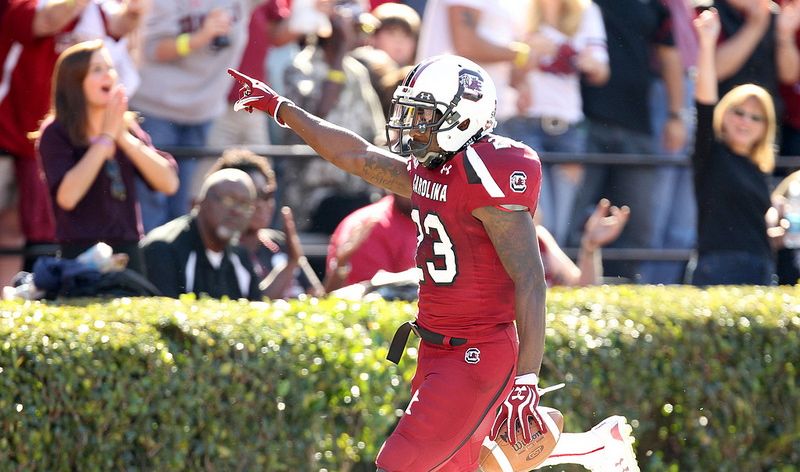 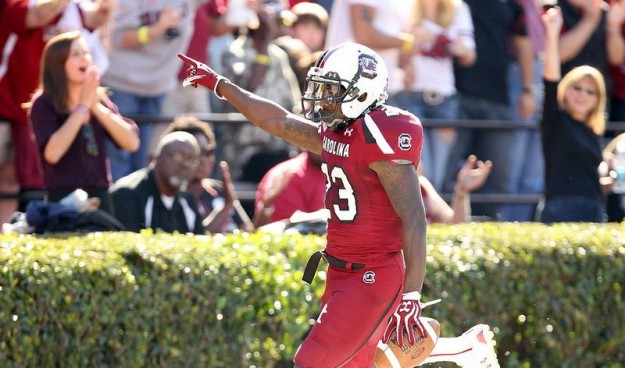 By John Loveday || Even though the University of South Carolina football team will not win the SEC this year, there are plenty of records that can still be broken – or at least tied.

For example, if the Gamecocks beat Wofford this weekend they would finish the season a perfect 7-0 at home, which would be only the fifth time in program history (and the first time since 1987) that’s happened.  Not a bad “first” for head coach Steve Spurrier. In addition, the Gamecocks (8-2, 6-2 SEC) still have a chance to match their school record of 11 wins in a season, which was set last year.

“We have to play well if we expect to have a chance to beat these guys,” Spurrier said this week. “They can run the ball extremely well, play tough defense, and that’s why they’re the conference champs. We’re looking forward to the game.”

With a showdown against arch-rival Clemson looming the following Saturday, the No. 9 Gamecocks can ill afford to look past Wofford – particularly given the recent history of this series.  In 2008 USC had to score late in order to secure a 23-13 victory against the Terriers, while the Gamecocks only managed a 27-20 win in 2006.

Led by junior inside linebacker Mike McCrimon, Wofford has only allowed an average of 17 points per game this season.  McCrimon is a tackling machine with 50 total stops on the season.  The Terriers have another playmaker in junior outside linebacker Alvin Scioneaux – who has racked up 41 total tackles on the season (including 6.5 tackles for loss and three sacks).  Of course the pass rush isn’t one of the Terriers’ strengths as evidenced by the fact they have just 14 sacks on the season (compared to USC’s 34 total sacks).

One of the biggest story lines of this game is whether Spurrier will play Connor Shaw at quarterback with an injured foot.  Shaw originally hurt his foot against Tennessee and has not been 100 percent since.  He also reinjured his foot in last week’s win over Arkansas. If he can’t go, back up Dylan Thompson will get the start.

Gamecocks should expect to see plenty of Kenny Miles and Mike Davis in this contest.  The duo combined for 90 yards on 27 carries against the Razorbacks last week, and their productivity will be especially important considering how much the Terriers run the ball.

Wofford head coach Mike Ayers will be bringing his “Wing Bone” offense to Columbia this week, something that is rarely seen in major college football these days.  Ayers – who has coached Wofford since 1988 and owns a 170-113-1 record – describes his offense as a combination of the triple option wishbone and shotgun option. Ayers also likes to mix in unbalanced lines to keep the opposing team’s defense guessing.  In other words the Gamecocks must play smart fundamental football in order to slow down this unconventional offense.

Want to see the “Wing Bone” in action?  Take a look at these highlights …

In the past two games alone, the Gamecock defense has faced a total of 85 passes by Tennessee and Arkansas.  Wofford has attempted only 72 passes all season (averaging around 7 pass attempts per game). On the other hand, Wofford has run the ball 550 times – a 90/10 percent split.  This year Wofford’s most dangerous ball carrier has been Eric Breitenstein, who registered his 29th career 100-yard rushing game with 132 yards on 28 carries in last Saturday’s 16-13 overtime victory over UT-Chattanooga.

The USC defensive line should expect to see plenty of cut blocking, which hopefully will not result in injures.

“I hate it because all they do is come off the ball and cut (block),” defensive end Jadeveon Clowney said recently. “We’re going to have to be ready to stop the run. If we stop the run, we’re pretty much going to win the game.”

If Wofford expects to pull off a monumental upset it will need several big plays from its special teams unit.  However, USC is due for a special teams touchdown this weekend.  My hunch says Bruce Ellington – who has been in the zone lately with back to back 100-yard receiving games – will return a kickoff for a touchdown. Ace Sanders will also be fun to watch as always on punt returns.

With its defensive line at 100 percent and all of its linebackers healthy, USC should be able to impose its will against the Wofford offensive line, especially later in the game. USC has won 26 out of their past 29 games at home. I don’t see that trend changing this weekend.

Jadeveon Clowney has recorded 9.5 sacks on the season and stands only a half-sack away from tying the school single-season record (10) currently held by both Andrew Provence and Melvin Ingram. Enjoy it Gamecock fans, players like Clowney don’t come around very often.

John Loveday is a South Carolina public school educator and sports enthusiast. Reach him via email at [email protected].