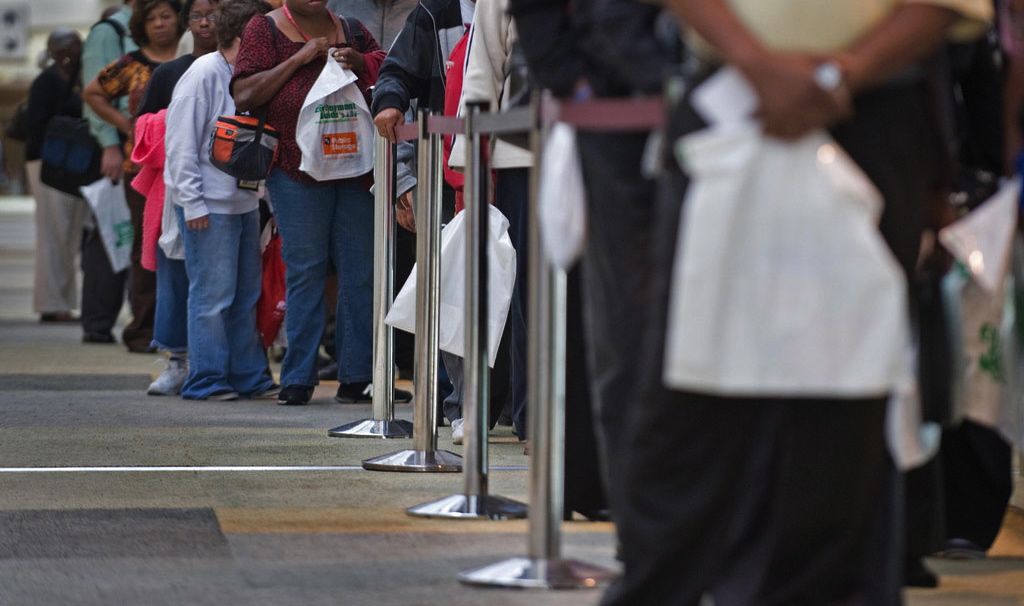 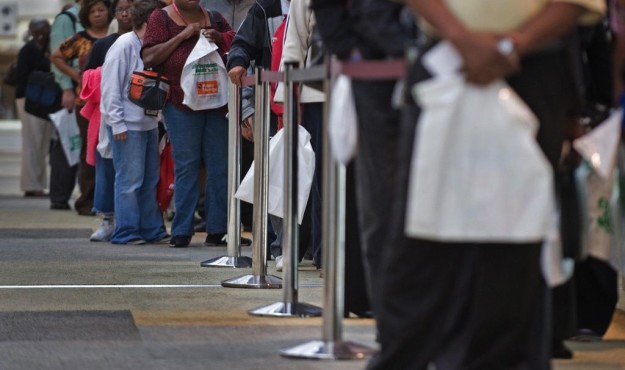 The American economy created 171,000 jobs in October but the nation’s unemployment rate edged up from 7.8 percent to 7.9 percent due to additional workers joining the labor force.  The U.S. Bureau of Labor Statistics (BLS)  also estimated that 84,000 additional jobs were added during the prior two months – further improving the nation’s employment outlook.

Meanwhile the nation’s underemployment rate – a broader, more accurate measure of joblessness – edged down from 14.7 to 14.6 percent.

Will the hiring uptick last though?  Serious storm clouds are on the global economic horizon – and then there’s the threat of looming tax hikes here at home.  Both of these factors could make sustained job growth difficult.

At least 130,000 new jobs need to be created every month to keep pace with the population growth – a figure that’s now been exceeded in back-to-back months.

Of course prior reductions in the unemployment rate were largely the result of a shrinking labor pool – not the addition of new jobs.  The U.S. labor force – which reached a 30-year low of 63.5 percent earlier this year – edged up to 63.8 percent last month.  That’s good news – but still well below the 65.7 percent level that U.S. President Barack Obama inherited.

South Carolina’s unemployment rate fell from 9.6 to 9.1 percent in September, although that decline was due exclusively to public sector (i.e. taxpayer-funded) hiring.  The Palmetto State’s labor participation rate remains well below 60 percent.  In fact in August the rate was at 58.3 percent – an all-time low.

Well I’ll be damned. I thought for sure it was going to hit about 6.5. My bad Oshitforbrains2012. I guess your not a liar after all.

Frank, You’re really “Big T” , aren’t you? I knew I haven’t seen any of his posts lately. You not only think like him, you spell like him–“your” instead of “you’re.”

He lives! , He lives! Ignorance is preserved!

lol, this whole exchange is funny as hell

Looks like the BLS conspiracy turned out to be BS. A few experts were saying they expected it to be 7.9% or 8.0% this month, although I’m not sure if they expected that to be from increased labor participation or a lower number of jobs created during that time.

Not bad. I didn’t expect decent job numbers until after the election, honestly.

True. Employers are waiting to see what happens.

I thought you were trying to push this as a politics site…Why the FEAR of reporting something pertinent…???

I think we know why…

Do you just have these written on notepad and just copy/paste them?

Oh, no, now I get it! You just copy/paste DIRECTLY from Drudge Report! Oh man… You don’t even have to scroll down, it’s at the very top of the page!

If Obama had approved the damn Keystone Pipeline there’d be no gas shortages in the Northeast!!

In a couple of hours, he won’t be sober enough to cut and paste.

BigT, you exemplify the title of “bitch” like nobody else.

OMG! What an idiot you are, BlaznT!

Yeah. You keep thinking that!

Damn Straight. You keep thinking that. Oshitforbrains2012. Let the fuckers finish running it into the ground. Odumbassbitch2012!!

ANYTHING that has happened good in ANY of the economic numbers since the ACA was passed has been IN SPITE of Obama/Reid, not because of them.

Hopefully, change is on the way. I’m cautiously optimistic.

I had opportunity to talk with Joe Wilson and must say he gets my vote as the stupidest member of Congress. This guy is just a walking soundbite and clueless about the issues in his district. Is this slug the best we can do for Congress? The only job (as in Joe Means Jobs) he is interested in is his.

Yep, Joe Wilson is a total POS. I hear he really pissed off the Lex biz crowd last week who have no use for him. Let’s find HIM a JOB in 2014.

Joe is an idiot.

Joe Wilson has run his course in Second District. We need new representation when his term is up.

Senator Ryberg is great choice to challenge The Wimp Wilson in 2014 in Second District (Lexington, Aiken and part of Richland). Hope he will take the challenge. I was at the meeting last week where some influential people signed on to help recruit Ryberg and that could make him the favorite in 2014.