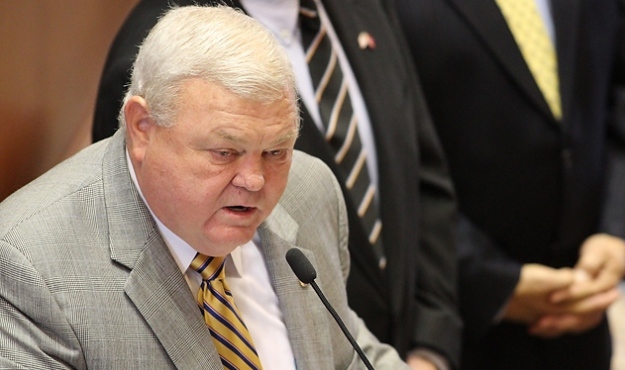 S.C. Sen. Jakie Knotts (RINO-Lexington) erupted into a “profanity-laced tirade” this week – allegedly cursing at a female receptionist for a pro-Second Amendment group that endorsed his opponent, Katrina Shealy.

“Sen. Jake Knotts’ anti-gun message is clear: He is fine with taking credit for pro-gun bills, and then turning around and killing them behind the scenes,” the National Association for Gun Rights wrote in an email to South Carolina voters. “He thinks gun owners like you aren’t paying attention to the fact that his committee is the graveyard for pro-gun bills.”

“When you demanded transparency from anti-gun politicians by requiring them to take on-the-record votes, Sen.Knotts went on a rampage to funnel those proposals to his
legislative death panel,” the group added.

Apparently those words did not sit well with Knotts – one of several “Republicans in Name Only” in the South Carolina Senate who is facing extinction this election cycle.

“Jake went ballistic with his filthy mouth while talking to the female receptionist at the National Association for Gun Rights,” the website Brushfires For Liberty is reporting. “He called up and let loose a flood of abusive and profane language on the receptionist at the NAGR instead of waiting to hold his tirade for the people in charge.”

“Sen. Knotts called our office yesterday to talk about his anti-gun voting record,” a spokeswoman at the organization says in an email. “When our receptionist simply asked why he was calling, he went on a profanity-laced tirade that will outrage you! ‘F*#&ing gun rights!’ he yelled at her, amidst a slew of other angry words.”

This website has already endorsed Shealy in this race – not because of Knotts’ potty mouth or his two-faced “advocacy” on behalf of gun bills, but because we believe Shealy would do a better job of protecting our tax dollars.  Also Knotts is one of several Midlands, S.C. politicians allegedly mixed up with the “Lexington Ring,” a cabal of corrupt politicians and crooked cops that are under federal investigation for their involvement in an illegal video poker operation.

You’re Knotts himself or a close relative, aren’t you?

The NRA endorsed Jake again, giving him (wait for this) an A rating. How the hell they can endorse him given his turncoat gestures toward pro-2nd Amendment bills is beyond me, especially since a lot of members have called them and advised them NOT to endorse Jake this time and given good reasons why. My NRA membership expires this month and when they begin sending me notices to renew my membership they will receive a photocopy of the page in their “First Freedom” magazine with the endorsement of Jake highlighted and an explanation about why I will not be renewing.

The NRA has been on a bad path for a few years, seeming too willing to compromise on our gun rights, something they once claimed they would never again do after GCA 68. Sadly, it sometimes looks like members of the Brady Campaign have infiltrated the NRA’s decision-making levels.

The NRA is mostly becoming a joke organization now. Their active engaging in fear mongering during the 2008 election led to a surge in people buying up ammunition, making it very hard to come by. There are better organizations out there that promote gun rights and try to hold politicians accountable.

Another example of why I dropped my membership to the NRA.

It seems that the NRA mostly goes by their questionaires and doesn’t really delve into the voting history. It might help if people bitch “before” the endorsements go out…

In general, I like the NRA (Life Member) and don’t really trust some of the others, like the NAGR.

and when he win’s again i hope he will call the fits office and do the same. GO JAKE GO

you like being represented by someone who takes money from an illegal source of revenue, who cavorts with prostitutes, who uses his position to bully people and who generally is an embarrassment to this state?

If the FBI is really involved in this alleged Lexington Ring investigation and debacle, it’s time to put up or shut up.

Like the Myrtle Beach pay to play BS that is spoken about on here. If, in fact, there is an investigaion going on, I would think after all this time the investivators would have put up. I guess they found nothing and have shut up. Too bad it has to continually be brought up like something is getting ready to break.

It’s not amusing to make fun of him any more. It’s like picking on a retarded adult. Pathetic.

Yeah, that’s why I quit responding to your posts, Carpe.

Most retarded adults have at least learned to wipe themselves. Poor old Jakie hasn’t learned to do that yet. I hear there is a special section at the Lexington landfill just for Jakie’s old skid marked underwear.

I’m surprised they could make out the profanity between the oinks and squeals coming over the phone. Porky Pig doesn’t like it when people notice his shenanigans and call him out on it.

I do support gun rights, although it isn’t at the very forefront of what we need to be worrying about right now.

If they really piss him off he’ll let loose the dreaded “profanity laden tirad”e. A lot worse, I suspect.

My plan and that of several others in Lexington County. Vote for Shealy this election, just to get Knotts out of office. In 2016, vote for whoever is running against Shealy. Getting someone worthy in the office is going to be a two step process.

EXACTLY!!!!!! If she by chance does us a good job, I would vote for her again. If not, I hope to do precisely as you said.

oh thank you. I thought I was the only one who realized this. Sometimes the grime is so thick it takes two good cleanings

Knotts is desperate. He is trying to use the same playbook from 08 by accusing Shealy of taking out of state $. Ethics reports show Knotts has taken over 10X more $ from out of state since Jan 1 than Shealy, and he has taken a lot more than that from in state gaming operators. Sounds like Honey Boo Boo’s uncle in his radio ads.

You know he kinda comes off as desperate in his ads.

Thing is, how can he worry given Shealy is running against him as a petition candidate?

If enough of the voters step outside the R/D box and give Shealey the win I’ll truly be amazed.

Jakie just needs to shut up and dissapear.

and by RHINO…you mean pople who endorse Democrats right?

jake being the fat blowhard that he is,has done some good for lexington county however the good he has done,was only to benifit himself or his family or to pay back other people,if you dig through all the lard,he is not a bad guy!he will not win re-election and he will be rolling on whoever he can after the election when he along with others will be arrested!

Yes insider, both are nikibots, and the three amigos are all dumb as a box of rocks. Could not pay me to listen to the three together in conversation. Saw some dumdum signs in Ridge Spring yesterday – got news for ya dumdum, rural SC is not going for your “elitist” garbage and marrying a medicaid funded doctor does not undo your family tree.

can’t we all just agree that state guvmint would be better off without representation from lexington?

I live in Lexington County and sadly, I have to agree with you. With a crooked Sheriff who has been in office since the early 1970’s, two crooked state Senators, Joe Wilson and his son and any other relatives in birthright political offices, I do believe SC would be better off if we had no politicians in office in Lexington County.

I agree also. Raspy started the list but you also have to include all of the people whose names do not get in the news that are related to the people Raspy mentioned who are being paid with our tax dollars. apparently whether they are qualified for the job they are given or not

Any law that restricts a person from owning or carrying a gun only makes things easier for the criminal element. NO law will ever stop a criminal from doing what he/she wants but honest law abiding citizens will leave their weapons at home or in their car and be defenseless when the criminals come knocking. If an armed movie goer was sitting towards the front of the theatre in Colorado there would have been far fewer dead, but the honest citizens left their guns at home.

Personally, I would vote for Lucifer Satan over Jake Knotts. At least everyone would realize how bad Lucifer Satan is and where he’s coming from. Jake Knotts is a sneaky bastard (and I mean the word “bastard” literally).

If Shealy works out, great! After four years of outstanding service, we can re-elect her. If she turns out to be nothing spectacular, we can get someone else. The thing to do is to pay attention between elections. Hopefully enough people have done so in regards to Jake Knotts this time.

It’s hard to believe that Lexington County could re-elect him after all the crap that has come out about him–mostly from his own mouth. If they happen to re-elect him, the county will deserve the reputation of being a place where the crooks are running the government. If they flush him, however, the entire state will heave a huge sigh of relief.

Didn’t realize Jake had his own newspaper till I got one in the mail yesterday.All the articles are about him,and there’s a great pic taken when he was a young gay sailor..;looks a little like,Truman Capote.

Some of these comments are ridiculous! First of all, when adults use the “R” word, you are a pathetic piece of crap! If all of you are against Jake Knotts, why aren’t you running for his position. It sounds like to me that you need to sit down and shut up! After reading the post cards that Katrina Shealy has mailed out, it tells me what kind of person she is…the kind we don’t need in office!

Where’s the attorney general when you need him?

“Big Oink” just needs to go back to the sty and wallow.

He can come out to visit Lizards Thicket and The Wild Hare where he can find all the things he really needs: too mamy calories, too much alcohol, and his dirty Lexington pol pals and hookers as company.

Danny Frazier is out and now Knotts has joined that club….there might be some hope for Lexington now so keep cleaning it up as its time for the Good Old Boys to go into retirement…….