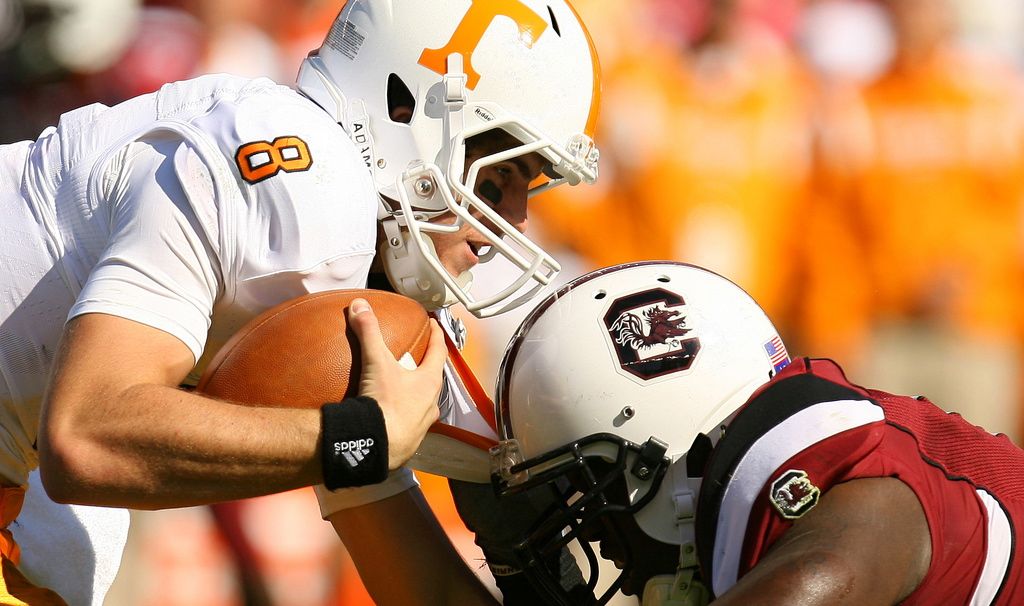 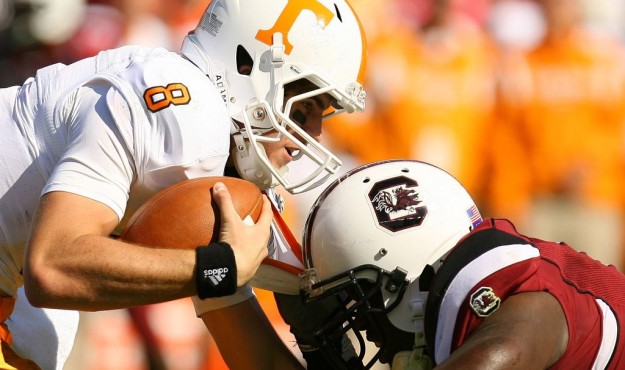 After dropping two games in a row against No. 6 LSU and No. 2 Florida, the chances of USC having a “great” year (e.g. national and/or conference championship) have all but evaporated.

However head coach Steve Spurrier’s squad still has a lot to play for and a “good” season is still a possibility.  With three out of their last four regular season games at home, the Gamecocks have a chance to go to Clemson in late November with a 9-2 record a shot at back-to-back 11-win seasons.

Double-digit wins in consecutive years – and for only the third time in school history – would obviously be nothing to be ashamed of.  And while most USC fans thought this would be the year USC brought home an SEC championship to Columbia,  remember – most pundits picked USC to finished second in the SEC East because of their tough schedule.

A home game against UGA, followed by back-to-back road games at LSU and Florida is brutal stretch for any program.  Would it have been nice to have emerged from that stretch undefeated? Or with only one loss?  Absolutely … but the most important thing for USC to do now is end the season strong and secure another solid recruiting class.

Meanwhile things up on Rocky Top have gotten quite rocky for third-year head coach Derek Dooley.  Earlier this week Dooley publicly scolded his starting quarterback, Tyler Bray, for dodging the media following the Volunteers’ loss to Alabama.  Dooley said the junior quarterback needed to “man up” and added that if “Bray is loose with the ball, he is coming out and we are playing (backup sophomore quarterback Justin) Worley.”

Dooley will more than likely be looking for a new job in 2013 unless he finds a way to run the table and win UT’s final five games (ending the regular season with an 8-4 record).  The Vols have yet to win a conference game this season, with their three wins come courtesy of N.C. State, Georgia State, and Akron (three teams with a current combined record of 7-16).

Sunseri brought with him a 3-4 defensive scheme, which he hoped would revitalize the UT defense.  Typically anytime a program changes defensive philosophies, a learning curve of at least a year or two takes place.  The Vols seem to be no exception to that rule of thumb.

UT is currently ranked dead last in total defense in the SEC (behind lowly 1-7 Kentucky) and No. 95 in the nation. Not only that the Vols are giving up an average of 43 points and 522 total yards per game versus SEC opponents thus far this year and rank last in SEC in defensive sacks with only ten on the season.

After facing the No. 3 (LSU) and No. 7 (Florida) defenses in the nation on the road, USC will obviously benefit by playing at home against a struggling defensive unit.  Thus far this season USC is ranked 9th in the SEC in total offense.  The Gamecocks are clearly more of a running team with 301 rushing attempts compared to 209 pass attempts (a 60-40 percent ratio).  Rushing yards have been hard to come by the past two weeks for the Gamecocks  (34 against LSU and 36 against Florida) so look for USC to try and re-establish their running game early in this contest.

Connor Shaw has struggled the past two weeks, but honestly how many quarterbacks in the country could go up against LSU and Florida on the road and put up decent numbers?  Shaw is a solid quarterback, but at this point is not “elite.”  In fact whether Shaw will ever become an “elite” quarterback before he leaves USC remains to be seen.

Regardless of his recent struggles, Steve Spurrier is sticking with Shaw – and I predict the redshirt junior will bounce back with a big day against this UT defense.

When you have a talented quarterback in Tyler Bray and an experienced receiving corps, you can expect your offense to put up points on anyone.  The Vols have done just that – averaging 27 points per game versus SEC teams.  The Vols are also ranked third in total offense in the SEC – and are perfectly balanced in their play-calling (256 pass attempts to 256 rushing attempts).

Also Bray has only been sacked three times this year, so the offensive line must be doing something right.

The bad news for Tennessee comes in the form of its banged up running backs.  Leading rusher Rajion Neal did not play against Alabama due to an ankle injury.  Second stringer Marlin Lane played against the Crimson Tide with a hampered quadriceps – but only gained 55 rushing yards.  Bray tweaked his knee against Mississippi State, but still played against Alabama.  The strong-armed junior is not considered a running threat, and with an injury to his knee he will be even less mobile.

Nonetheless, Bray is currently tied for third in the SEC with 1914 passing yards.

Easily the most explosive offensive players for the Vols are wide receivers Justin Hunter and Cordarrelle Patterson.  Hunter leads the team with 567 receiving yards, while Patterson is UT’s best deep threat.  He currently ranks second in the SEC with 835 all-purpose yards and six touchdowns.

USC is currently ninth in the nation in total defense (fourth in the SEC behind Alabama, LSU, and UF). USC leads the SEC with 29 sacks.  The USC defense has been exceptional this season – especially at home – only allowing eight points per game.

Let’s be honest, USC’s defense isn’t the reason the Gamecocks lost their past two games.

The Gamecocks simply cannot afford another special teams effort like the one they put forth against Florida last week.  Two special team fumbles gift-wrapped a pair of quick Florida touchdowns, turning what should have been an epic Top Ten battle into a Gator rout.

Again, USC must watch out for UT’s Cordarrelle Patterson – who currently leads the SEC with a 32.1 yard average including one kickoff returned for a touchdown.

USC’s Adam Yates will need to place his kickoffs well into the end zone in order to avoid a big return by Patterson.  Conversely, if UT is going to win this game, it will probably need a big play by their special teams unit.

In their past two away games against UGA and Mississippi State, the Vols gave up 92 total points and 1010 total yards. Playing in front of their home crowd, expect the USC offense to rebound this week and score somewhere in the 30 point range.  Tennessee will score some points as well, but the Vols simply won’t have enough talent defensively to keep up with the Gamecocks.

I hope the GameCocks can come together as a team and be mentally ready for this game. Even the toughest cowboy gets thrown from the bull.