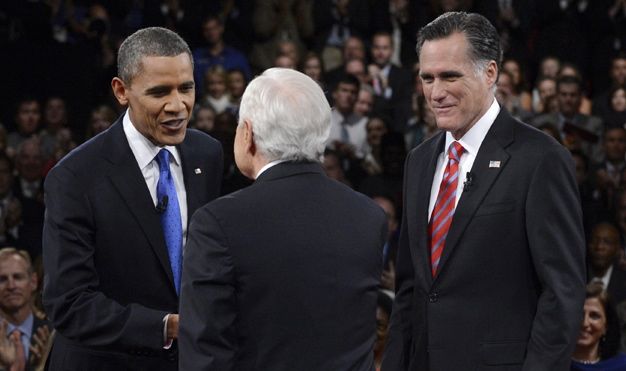 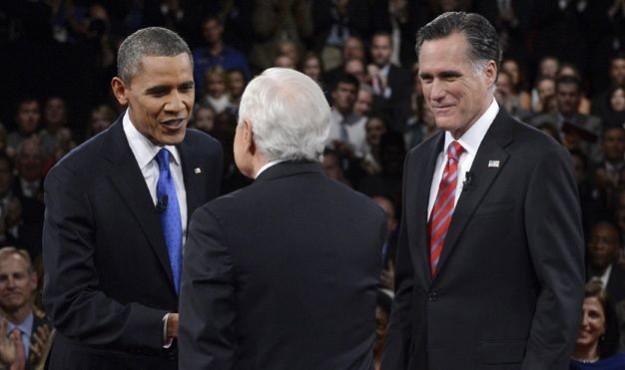 BOTH PRESIDENTIAL CANDIDATES SEE AMERICA AS A “GLOBAL FORCE FOR GOOD”

In fact their extended discussion of numerous nations that most Americans don’t really care about – and probably couldn’t find on a map (Mali?) – quickly became so tedious that the candidates strayed from the intended topic of the night and moved onto talking points about the economy and (briefly) education.

(To read our always entertaining live blog of the proceedings, click here).

When they did stick to the subject at hand, both Romney and Obama actually offered similar visions for the world around them – interventionist agendas that revolve around America continuing to play the role of the world’s preeminent defender of democracy (a.k.a. policeman).

“America is the hope of the earth,” Romney said.

Sheesh … somebody cue up that U.S. Navy “Global Force for Good” commercials, because that’s precisely the brand of neocon nonsense that both of these candidates were peddling.

On the basis of this shared principle, #Obamney (a.k.a. Willard Hussein) proposed a veritable smorgasbord of geopolitical and military meddling all around the globe – in Afghanistan, China, Egypt, Iran, Iraq, Libya, Pakistan, Syria and, of course, Mali.  Some of this meddling both candidates supported, other meddling one candidate supported and the other opposed … while still other meddling yielded subtle differences as to the time, place and manner of the “meddle.”

For example … when should “crippling sanctions” against Iran have been implemented?

Here’s the question that needs to be asked of both candidates: Is any of the “meddling” worth trillions of tax dollars that we don’t have – and that future generations simply cannot afford?

And despite the best efforts of the candidates to invoke sympathy for the plight of those “yearning to breath free” abroad – that simply isn’t America’s problem (or at least it shouldn’t be).

Too many people are yearning to breathe free here at home.

Don’t believe us?  Just ask the American people … who, for once, actually have their wits about them when it comes to the level of importance they place on these issues.

Prior to the two candidates taking the debate stage this week, a Reuters poll underscored just how little attention Americans are paying to foreign policy.  According to that survey, only two percent of likely voters viewed “war/ foreign conflicts” as the most important issue facing our nation – while only two percent viewed “terrorism/ terrorist attacks” as the most important issue.

By contrast, the poll found that a whopping 43 percent of Americans  indicated the economy as the most pressing issue – with another 25 percent listing “unemployment/lack of jobs” as their top concern.

Given the relatively low attention likely to be paid to the substance of this debate, then … how did the candidates do on style?

Well, neither Obama nor Romney scored a knockout punch on our scorecard, although the mainstream media rushed to declare Obama the victor.

“Obama controlled the third presidential debate in a way not all that dissimilar from the way Romney controlled the first one,” wrote Chris Cillizza of The Washington Post.  “Obama clearly came loaded for bear, attacking Romney from the jump for a lack of clarity when it came to his vision (or lack thereof) on foreign policy.”

That’s overstating it – Obama did turn in strong performance (particularly his quote about Romney having a 1980s foreign policy, a 1950s social policy and a 1920s economic policy), but his effort was nowhere near as commanding as the performance Romney gave in the first debate.  Meanwhile Romney was nowhere near as terrible in the third debate as Obama was in the first.

A much better assessment of the politics of the third debate came from Rick Manning at Net Right Daily, who concluded that Romney’s ability to avoid any major gaffes made him the winner.

“Obama desperately needed Romney to stumble in this debate to change the momentum that has sent his campaign into full scramble mode,” Manning noted in his analysis. “What Obama got instead was the equivalent of a Romney prevent defense.  A Romney determined not to make news in the debate.”

Romney accomplished that mission – which wasn’t hard to do given the tedious subject matter and the fact that a great number of Americans were tuned into Monday Night Football or the seventh game of the National League Championship Series (NLCS).

Frankly, this debate needed a Ron Paul – or Libertarian Party nominee Gary Johnson – to provide a true counterpoint to the bipartisan doctrine of American interventionism abroad.