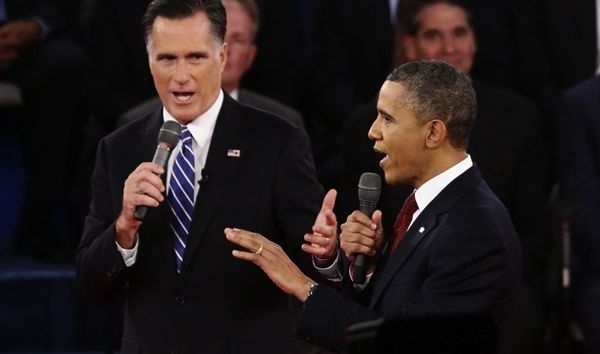 BARACK OBAMA MUCH IMPROVED, BUT NO ONE SCORES “KNOCKOUT VICTORY” IN SECOND PRESIDENTIAL DEBATE

After getting slaughtered by GOP nominee Mitt Romney during the first presidential debate in Denver two weeks ago, U.S. President Barack Obama (with a major assist from CNN anchor Candy Crowley) turned in an infinitely stronger performance in this week’s second debate in New York.

Will it be enough to blunt the recent momentum Romney’s campaign has picked up?  That remains to be seen … as Obama clearly did not score the sort of knockout victory he was searching for.

Although he was rarely (if ever) factual during the second debate, Obama was plenty feisty.  And although he was rarely (if ever) accurate, he was eloquent and on message – vigorously engaging the Town Hall format (and Crowley’s sympathetic officiating) to rise above his mystifyingly terrible first debate performance.  Meanwhile Romney – while not as commanding as he was in Denver – turned in another solid effort, particularly on critical economic issues.

(To read our live blog of the proceedings, CLICK HERE).

Romney didn’t display quite the same wire-to-wire strength that he showed in the first debate – but he had several compelling moments. As  usual, he was at his best when slamming Obama’s mishandling of the American economy.

“What you’re seeing in this country is 23 million people struggling to find a job,” Romney said early on in the debate. “The president’s policies have been exercised over the last four years and they haven’t put Americans back to work.”

Romney pointed out that the unemployment rate was 7.8 percent when Obama took office – identical to its current level – but added that when you count all of the people who have given up their search for gainful employment, that rate soars to 10.7 percent.  He also chided Obama for not reaching his goal of 5.4 percent unemployment – and for doubling federal deficits as opposed to cutting them in half.

“If you’re to elect President Obama you know what you’re going to get – a repeat of the last four years,” he said.

“We haven’t heard from the governor any specifics – other than Big Bird and eliminating funding for Planned Parenthood – as to how he’s going to pay for it,” Obama said.

Obama also dismissed Romney’s oft-mentioned “five point plan” as a “one point plan,” which he said “is to make sure that folks at the top play by a different set of rules.”

Romney disputed that contention, promising that the upper class would continue to pay “sixty percent of the tax burden.”

“That’s not going to change,” he said.

Oddly enough, the flash point of the debate came on the foreign policy front – which has been largely overlooked over the course of this election.  Specifically, a member of the audience asked why additional security wasn’t added to a U.S. Embassy in Libya prior to last month’s terrorist attack there.

Almost immediately, both candidates accused each other of attempting to politicize the attack – while Romney took it one step further and claimed that Obama’s administration misled the public about the true nature of the incident.

“It was a terrorist attack,” Romney said, “and it took a long time for that to become known to the American people.”

Obama countered that he had correctly labeled the incident as an “act of terror” the day after the attacks – and received support from Crowley f0r his contention.  Is that true, though?  This post raises some serious doubts about Obama and Crowley’s position.

The exchange was one of many reasons why Crowley’s performance as moderator was widely panned as being  exceedingly partial to Obama.

“Governor Romney did exceedingly well considering he had to debate two people at once,” said Bill Wilson, president of Americans for Limited Government. “Candy Crowley is a disgrace.”

Libertarian Party presidential nominee Gary Johnson – who has been cut out of the presidential debates – said afterward that Romney and Obama were nothing but “dueling Phil Donahue acts carping at one another over who is worse.”

“Behind the fuzzy math and the quibbling, there was nothing more than a commitment to continue the status quo – with at most a few minor adjustments,” Johnson said.  “We don’t need adjustments. We need a fundamental reduction in the role and cost of government, and both Romney and Obama are fundamentally big-government guys.”