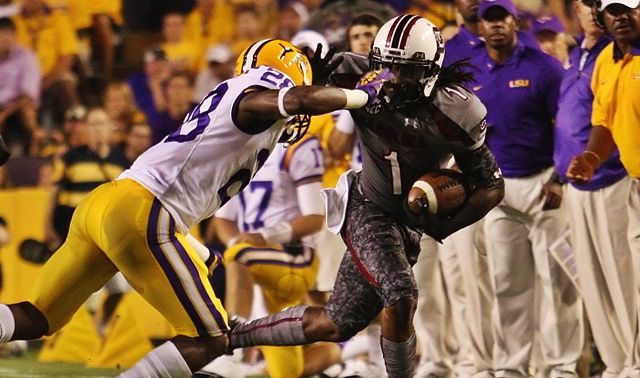 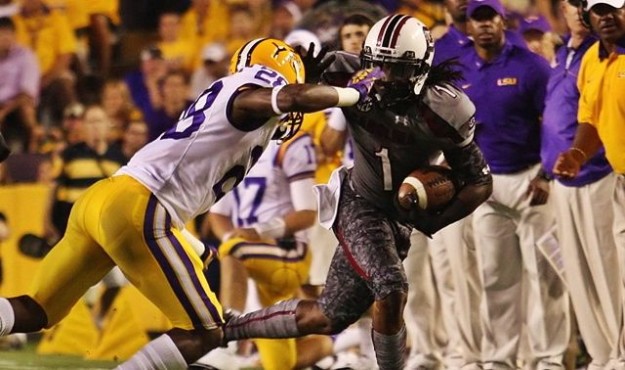 BREAKING DOWN THE GAMECOCKS’ 23-21 LOSS TO LSU

By John Loveday || Louisiana State University’s football team outgained South Carolina by a 406-211 margin last weekend. They “out-possessed” USC by a 37-23 minute margin. And they forced two turnovers while only giving away the football once.

Rarely does a game that includes these glaring statistical differences wind up being only a two point contest – yet despite a mediocre performance (at best) USC still only lost to LSU 21-23 on the road.  There is clearly a reason why the Tigers (6-1, 2-1 SEC) have won 22 straight games at home and are always in the national title conversation – Les Miles’ team is among the nation’s elite programs and has a level of top-to-bottom talent unlike any team the Gamecocks (6-1, 4-1 SEC) have faced all year.

So how did USC – which has been earning high marks in recent weeks – fare against LSU?  Let’s go to the grades …

The USC offense knew it was going up against one of the best defensive units in the country this past Saturday – and the Bayou Bengals did not disappoint their home crowd as they held USC to a season low 211 total yards.  Connor Shaw was 19 of 34 (56 percent) passing with two touchdowns and two interceptions.  He was also limited to negative rushing yardage for only the second time this year, though.  Also junior tailback Marcus Lattimore gained only 35 yards on 13 carries – a season low for him.

The Gamecock offensive line was pushed around most of the game, unable to open up running lanes for Shaw and Lattimore.   In fact USC’s run blocking was essentially nonexistent against the Tigers.   Pass protection was decent at times, but LSU’s downfield coverage was excellent – forcing Shaw into four sacks and numerous hurries and throwaways.  Whether it was LSU’s home field advantage, a lack of effort or concentration, or a simple failure to executive – offensive line coach Shawn Elliott will have his work cut out for him this week preparing for Florida.

Shaw – who lost only his second career start – simply never got into a groove.  He overthrew several balls, underthrew a few as well, and his two interceptions were nails in the Gamecocks’ coffin.  The reason this grade is not an ‘F?’  USC’s receivers played well – with Ace Sanders, Bruce Ellington, and tight end Justice Cunningham all pulling in multiple big catches in the game.

Did the defense play its best game against the Tigers?  Clearly not.  USC defensive coordinator Lorenzo Ward admitted this was the Gamecocks’ worst tackling performance of the year.  However, a big part of the defensive woes can be contributed to the poor play of the USC offensive – which converted on only 3 of 13 third downs.

Clearly, fatigue played a factor in this game.

The glaring statistic?  The 258 rushing yards allowed by the USC defense.  Those yards permitted long, time-consuming drives by LSU and eventually in the fourth quarter the floodgate broke when the Gamecocks allowed a 50-yard touchdown run by freshman Jeremy Hill.  That run put LSU ahead 23-14 with only 5:03 left in the game.  USC would eventually score a touchdown with 1:41 left to make it 23-21 – but they simply ran out of time.

The defensive play of the night? Jimmy Legree’s interception in the first quarter, which was returned 70 yards to the LSU one-yard-line.  Legree – a redshirt junior from Beaufort, S.C. – has been a solid contributor so far this year, and with one season of eligibility left Gamecock fans should be happy knowing he has the potential to make many more big plays down the road.

LSU’s punter Brad Wing is considered by many to be among the best in the country. However, USC punter Tyler Hull outplayed Wing on Saturday.  Hull averaged 37 yards on seven punts (including one punt inside the 20), while Wing averaged 33.5 yards on four punts (with no punts inside the 20).  Ace Sanders continues to play at an elite level this year with a 50 yard punt return. Unfortunately, a USC penalty negated a big chunk of those yards.  In fact USC’s special teams play helped keep this game close even when LSU was running away from the Gamecocks statistically.

Being an optimist, I try to find the good in any situation. Consider this … most USC teams playing average football on the road against an opponent like LSU would have lost by three touchdowns (maybe more). The quality of this football program has improved so much under Steve Spurrier that an average (to below average) effort was still almost enough to beat one of America’s elite programs on their home turf.

Does that detract from the agony of defeat?  No.  But it is a positive sign.

1) The Gamecocks still control their destiny in the East.   With a win next week against Florida and two home victories against Tennessee and Arkansas, the Gamecocks will be heading to the SEC championship game for the second time in three years.  However a loss in any of those three remaining conference games will essentially end USC’s chances of making it back to Atlanta.

2) Jadeveon Clowney seemed to be among the most irritated of the players in the post-game interviews. He stated that perhaps some players were “playing scared” alluding to possible intimidation by the hostile LSU crowd. Clowney was a winner in high school and to date his playing career at USC at been much of the same. Since Clowney stepped foot on campus the Gamecocks have gone a staggering 17-3 (11-2 last year, and 6-1 thus far this year). Clowney isn’t use to losing and will do whatever he can to ensure this team bounces back next week.

Up next: #7 USC vs. #2 Florida (BCS rankings) USC will be one of the two teams featured by ESPN’s College Gameday for the second time in three weeks. After the morning festivities are over, the game will be televised at 3:30 on CBS. Check back later this week for a breakdown of the USC vs. Florida matchup.

258 BETWEEN THE TACKLE rushing yards is national championship caliber.

34 yards of pussy foot rushing yards is what a program gets when it loads it schedule with Lousiana Lafayette Cosmetology and Barbiology schools.

Are you referring to LSU 2012 opponents: the North Texas Mean Green, the Idaho Vandals, and the Towson Tigers?