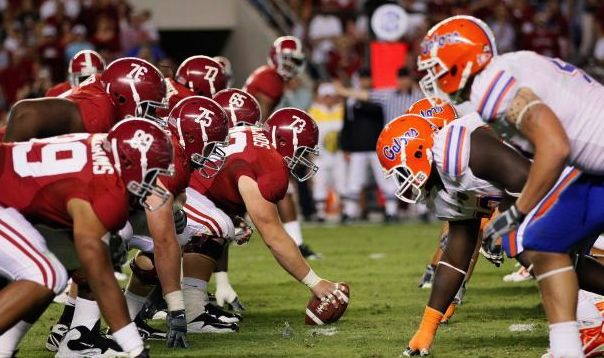 WILL THERE BE ANOTHER ALL-SEC NATIONAL CHAMPIONSHIP GAME?

Suffering from “SEC fatigue?”  Then you probably shouldn’t look at the first Bowl Championship Series (BCS) standings of the 2012 season.

According to the controversial hodgepodge of human polls and computer algorithms, six of the nation’s top twelve football teams hail from the mighty Southeastern Conference – which has won the last six national championships.  In fact were the 2012 season to end today, defending national champion Alabama would play No. 2 Florida for the title – guaranteeing the SEC its seventh straight crown in a second straight “All-SEC” championship game.

Currently on the outside looking in?  Perennial PAC 12 powerhouse Oregon (No. 3) and Kansas State (No. 4) of the Big XII – a conference which recently lost Missouri and Texas A&M to the SEC.

The wailing has already begun, too – with ESPN columnist Adam Rittenberg arguing that Oregon should be ranked No. 2, not Florida.

“Oregon has looked the part on the field, averaging 52.3 points and winning its games by an average margin of 32.3 points,” Rittenburg writes. “Yet Chip Kelly’s Ducks are behind Florida at No. 3 because of the Pac-12’s perceived weakness, even though the Pac-12 has three teams in the top 10 (No. 8 Oregon State and No. 10 USC). That’s hard to understand.”

Florida defeated Ohio State 41-14 following the 2006 season to begin the SEC’s championship run.  The next year, LSU defeated the Buckeyes 38-24.  Following the 2008 season Tim Tebow’s Florida Gators beat Oklahoma 24-14, while Alabama beat Texas 37-21 the following year to make it four in a row.

Meanwhile head coach Dabo Swinney’s Clemson Tigers (5-1, 2-1 ACC) – who climbed as high as No. 5 in last year’s BCS standings – are ranked No. 19. Incidentally, the ACC hasn’t placed a team in the BCS championship since the end of the 2000 season – when Florida State lost to Oklahoma.  Miami of Florida played in two BCS championships (following the 2001 and 2002 seasons), but the Hurricanes didn’t join the ACC until 2004.