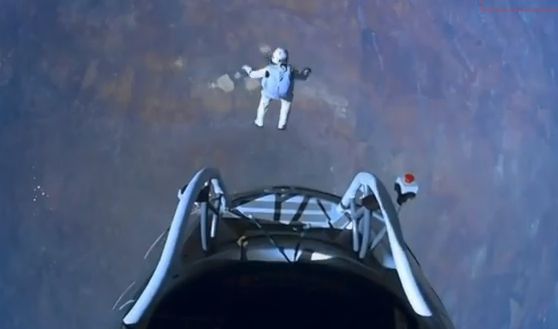 Somebody cue Tom Petty … because this stunt takes “Free Falling” to a whole new level.  Literally.

Austrian daredevil Felix Baumgartner became the first human being to break the speed of sound during a record-setting free fall from 128,000 feet this week.  Baumgartner, 43, reached a maximum speed of 833.9 miles per hour (Mach 1.24) during his fall above the desert near Roswell, New Mexico.

His jump – a.k.a. Operation Red Bull Stratos –  also broke a world record for the highest manned balloon flight.  It was watched live by more than 8 million viewers on YouTube.

“Sometimes you have to get up really high to see how small you are,” Baumgartner said prior to stepping off of the metal platform of a capsule suspended beneath his balloon.

Baumgartner, who is known as “Fearless Felix,” actually isn’t without fear.  He suffers from claustrophobia – and had to work with a sports psychologist to prepare for the two-and-a-half hour ride he took in the tiny capsule to the edge of space.  Baumgartner also had to deal with a nasty spin during his free fall that team leaders feared would cause him to lose consciousness.

“I never felt like I was going to die, but I did think that if I don’t get myself out of this (spin) I won’t break the speed of sound,” he told USA Today. “That would have been a big disappointment because I just don’t have any energy left to do this again.”

BBC will soon be airing a two-hour special devoted to Baumgartner’s jump – and the two test jumps that preceded it (one from 71,581 feet, the other from 96,650 feet).

We salute him … this is one of the most amazing feats we’ve ever witnessed.