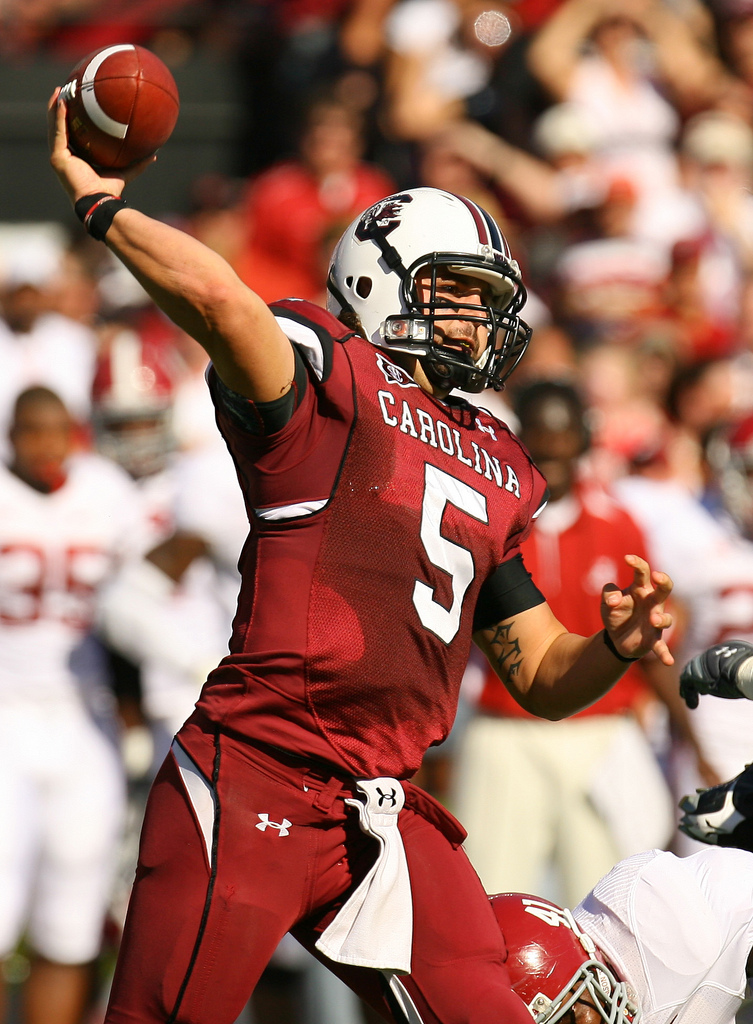 That sinking feeling was back … and every University of South Carolina fan clad in garnet-and-black at Williams-Brice Stadium on Saturday afternoon could feel it. The all-too-“thinkable” was happening again. The Chickens were going to choke … and the “Chicken Curse” was once again going to snatch another ignominious defeat from the jaws of victory.

After giving up a touchdown to top-ranked Alabama with just over half a minute remaining on the clock in the first half, Steve Spurrier’s Gamecocks emerged from the locker room leading the defending national champs 21-9.

As long-suffering Gamecock fans know all too well, the only thing USC handles worse than failure is success. Hope springs eternal? Not in Columbia, S.C.

Seriously, you don’t think 118 years of mediocrity happens overnight … or from habitually “seizing the moment” do you?

Of course not … it comes from habitually screwing the pooch.

And so on the opening kickoff of the second half, hearts across the Palmetto state stopped beating as cornerback Chris Culliver muffed the return. More than 82,000 fans gasped in unison … NOOOOOOOO!!!

Fortunately, Culliver managed to recover his own fumble and advance it to the eighteen yard-line, but the reprieve from slippery fingers would prove to be short-lived. Seconds later, USC’s first snap of the second half glanced off of quarterback Stephen Garcia’s hands and began careening toward the USC goal line.

Rather than try and make a play with the football, Garcia picked it up at the four yard-line and threw it into the end zone for a safety – giving Alabama not only two free points but possession of the ball again. Eight plays later, an Alabama field goal had cut the USC lead down to seven.

“It” was indeed happening again … and not only did everybody in the stadium know it, it seemed like there was nothing anybody could do to stop it. Like the proverbial slow-motion train wreck it was inevitable. Inexorable. And it was making us pretty damn irritable.

It started with one play – one critical conversion that turned an “inevitable” Alabama victory into a win for the ages for South Carolina.

Facing a third down and eight from their own 20 yard-line with nine minutes left in the third quarter, Spurrier called a crossing route for sophomore wide receiver Alshon Jeffery – who has clearly emerged over the first six weeks of the 2010 season as the best wide receiver in all of college football. Yet while Jeffery catches almost everything that’s thrown into his zip code, you’ve got to get the ball to him first – which on this particular play wasn’t going to be easy.

Why not? Well, for starters Alabama defensive lineman Marcell Dareus – an All-American, a sure-fire first-round NFL draft pick and the defensive MVP of the national championship game – had drawn a bead on Garcia, and was ready to lay a crushing blow on the junior signal-caller as he surveyed the field.

Amazingly, Garcia didn’t flinch. Despite the pressure coming from the 6-foot-4, 306-pound lineman, he stood firm in the pocket and delivered a 12-yard strike to Jeffery for one of the biggest first downs in South Carolina history.

Two more big third down conversions would follow on “the drive,” which consumed 15 plays and eight minutes en route to a touchdown that put the Gamecocks back up by two scores.

Garcia completed 5 of 6 passes for 39 yards on “the drive,” while running backs Marcus Lattimore and Brian Maddox combined for 42 rushing yards – the last of those being Lattimore’s one-yard touchdown run.

From the game’s official play-by-play stats, here is “the drive …”

Obviously, “the drive” didn’t win the football game for South Carolina – at least not all by itself. But it did provide the game-winning points … and it did come at a time when Alabama appeared to be taking control of the game’s momentum

“The drive” also gave the Gamecocks the confidence they needed in the fourth quarter to answer another Alabama score … thus sealing the biggest win in the history of the program.