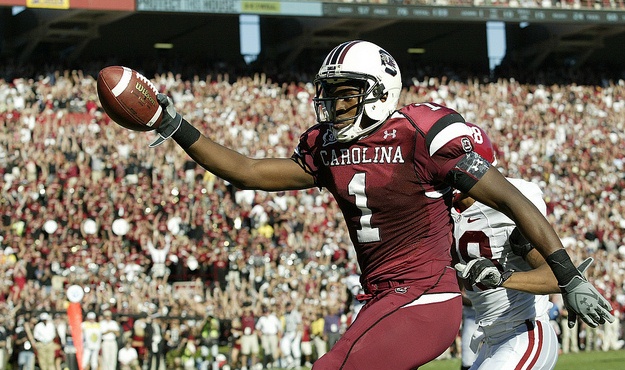 The win was the Gamecocks’ first-ever victory over a top-ranked team – and was easily the biggest win of Steve Spurrier’s six-year stint in Columbia, S.C.

“I think that this game was meant to be,” Spurrier said. “Our guys played their hearts out, a lot of outstanding individual plays and we held on and got a few breaks here and there.”

The Gamecocks (4-1, 2-1 SEC) stormed out front early, taking a 21-3 lead over the Tide in the game’s first sixteen minutes. That lead was due in no small part to the stellar play of quarterback Stephen Garcia – who had the game of his career against the best defense in the SEC. In the first half alone, Garcia completed all nine passes he attempted for 94 yards and three touchdowns – two of them to sophomore Alshon Jeffery, the SEC’s leading wide receiver.

Not bad for a quarterback who was yanked from his last start.

Garcia finished the game completing 17 of 20 passes for 201 yards and three touchdowns. He was intercepted once, but the pick came on a perfectly-thrown ball that Jeffery bobbled.

That was the only turnover USC committed after giving the ball up four times two weeks ago against Auburn. 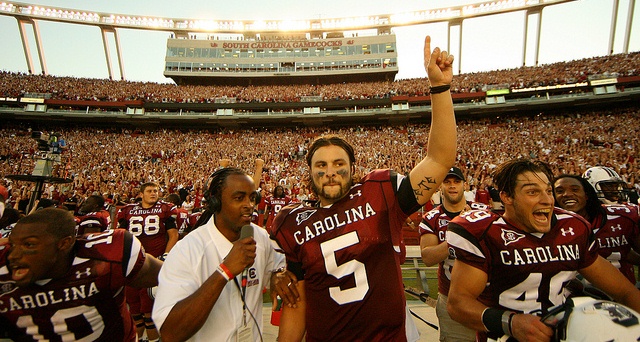 Garcia did it with his legs, too, picking up a critical fourth-down conversion in the first quarter by spinning out of an inside run and breaking down the left sideline for a seven-yard gain and USC”s first fourth-down conversion of the 2010 season. On the very next play, Garcia stood in the pocket and hit Jeffery for a 26-yard touchdown pass and a 14-3 lead. After USC’s defense forced a fumble on Alabama’s next possession, Garcia and Jeffery teamed up for a 15-yard strike that put the Gamecocks up 21-3.

“Stephen Garcia played the best he’s ever played,” Spurrier said. “That was Stephen’s best game by far that he has played here at South Carolina.”

Jeffery hauled in 7 passes for 127 yards and two touchdowns – giving him his fifth 100-yard game of the year and putting him at 625 receiving yards for the season.

While Garcia and Jeffery were busy getting it done through the air, South Carolina got another solid game on the ground from true freshman running back Marcus Lattimore.  After being held to a career-low 33 yards two weeks ago against Auburn, Lattimore picked up 94 yards on 23 carries and a pair of touchdowns against ‘Bama. He also caught two passes for 16 yards  – including one for USC’s first score.

Lattimore would have likely gone over 100 yards against the Tide (becoming the first player in more than three years to accomplish that feat) but he missed the majority of the third quarter after falling awkwardly. His backup, senior Brian Maddox, picked up 26 yards on five carries in his stead.

“We had a great game plan coming in,” Lattimore said. “I knew after watching the film that the plays we worked on would work and they did.”

Defending Heisman Trophy winner Mark Ingram and Trent Richardson – a.k.a. “The Fast and the Furious” – seemed primed for a career day against the Gamecock defense, which was gashed two weeks ago for 334 rushing yards. In his first three games back from a knee injury, Ingram had rushed for 355 yards and six touchdowns. Richardson, meanwhile, had rushed for 419 yards and four scores.

So … how did the pair fare on Saturday?

Not well at all … Ingram picked up just 41 yards on 11 carries while Richardson was held to only 23 yards on 6 rushing attempts. Neither scored a touchdown, either. That’s a far cry from a year ago in Tuscaloosa when Ingram rushed for a career-high 246 yards – a game that helped stake his claim to Alabama’s first-ever Heisman Trophy award.

In addition to holding Ingram and Richardson in check, South Carolina’s defense registered seven sacks on senior quarterback Greg McElroy – who lost for the first time as a starting quarterback at either the high school or college level.

“People talked about how dominating their (Alabama’s) offensive line was,” said USC defensive lineman Melvin Ingram, who had two of USC’s seven sacks. “We just wanted to accept the challenge and go out and show how dominating we are.”

McElroy finished the game completing 27 of 34 passes for a career-high 315 yards, but he repeatedly struggled to find open men against a smothering Gamecock secondary.

Alabama (5-1, 2-1 SEC) just couldn’t stop the Gamecocks when it counted – and the Tide couldn’t capitalize even when it appeared that the Gamecocks were wearing down and on the verge of giving the game away.

For example, after a touchdown pass from McElroy to wide receiver Julio Jones trimmed the Gamecock lead to 21-9 late in the first half, USC opened the second stanza with a miscue that had many Carolina fans thinking “Chicken Curse” – a reference to the program’s all-too predictable bad luck. On the very first play of the second half, Garcia bobbled a hot snap from center T.J. Johnson and was forced to throw the ball through the end zone for a safety.

“Once I saw the ball bounce I wasn’t sure if there was somebody behind me and I didn’t want to fumble, so I just threw it out the back of the end zone,” Garcia said. “I think I hit the goal post. They said that was my first incompletion of the game, but oh well.”

Alabama scored a field goal eight plays later to make it a 21-14 game – with the momentum having clearly shifted to the defending champs.

But that’s when South Carolina embarked on perhaps the greatest drive in the history of the program – a bruising 15-play, 82-yard masterpiece that took eight minutes off of the clock and ended with a 1-yard Marcus Lattimore touchdown.

That clutch drive – which may have ended the “Chicken Curse” once and for all – put USC ahead 28-14.

The game still wasn’t over, though, as a missed assignment in USC’s defensive secondary on the very first play of the fourth quarter led to a 51-yard touchdown pass from McElroy to junior wide receiver Darius Hanks.

After getting the ball back off of a USC turnover, the defending national champions once again seemed destined to pull off the comeback – but a dropped pass on a fake field goal attempt proved to be their undoing.

The Gamecocks took possession on their own 26-yard line and proceeded to march 74 yards in 10 plays – another clutch drive capped by a Lattimore touchdown.

“It’s not like we just lost. They beat us,” Alabama head coach Nick Saban said. “They out-executed us. They played better than we played. They played with more intensity. They played physical.”

With the win, South Carolina is the first program in NCAA history to upset three No. 1’s in a single calendar year. Back in January, USC knocked off undefeated and No. 1 Kentucky in men’s basketball, while the baseball team defeated Arizona State this summer en route to its first-ever College World Series championship.

South  Carolina previously lost to No. 1 Maryland in 1955, No. 1 Florida State in 1991, No. 1 Florida (then coached by Steve Spurrier) in 1996 and again to top-ranked Florida a year ago. The highest-ranked team ever defeated by USC prior to Saturday’s game was the 1982 North Carolina Tar Heels, who were ranked third in the nation at the time.