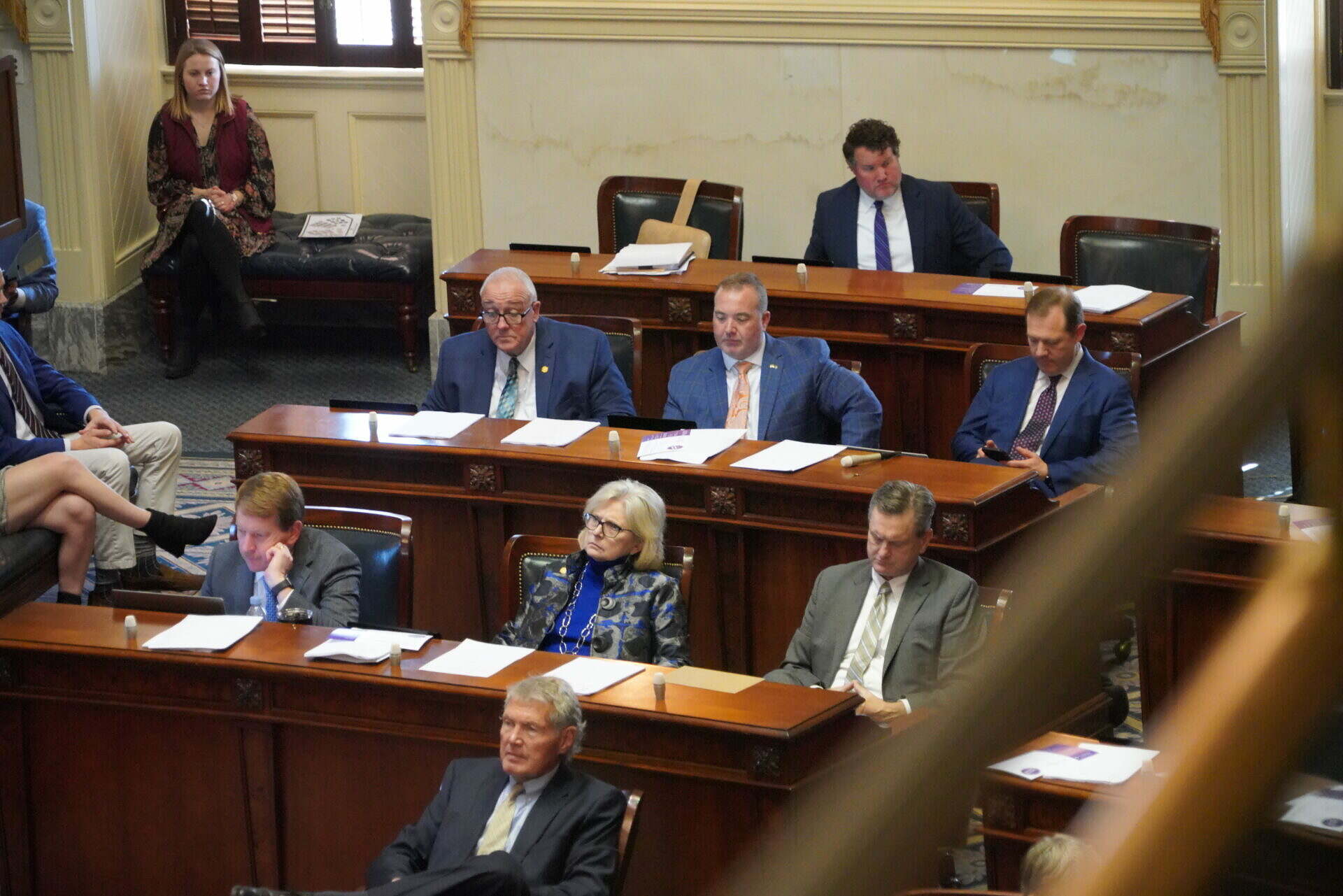 South Carolina state senator Katrina Shealy is refuting rumors that she will not seek another term in office in 2024, telling this news outlet she will seek a fourth term representing Lexington County in the S.C. Senate next spring.

“I’m not just running – I’m running with a vengeance,” Shealy told me on Tuesday.

“I have all intentions of running for re-election in 2024 barring any unforeseen circumstances,” Shealy added.

When I asked her what might constitute an “unforeseen circumstance,” Shealy fired back with a joke.

“Me dying,” she quipped.

Shealy, of Red Bank, S.C., told me the legislature has been abuzz with rumors she might step down due to the fact her husband, James Shealy, is battling Alzheimer’s disease.

“The rumors are not true of the probability I may not run due to family health concerns,” Shealy told me. “My husband and I have a great situation here on the farm and have plenty of family, friends and health care professionals around to support us.”

“We are like other families and can see the growing concerns they face,” Shealy continued. “I enjoy serving my state and my community. Jimmy and I have both dedicated our lives to public service and caring for others including children, families, veterans and those less fortunate. The struggles sometimes make you work harder.”

In announcing her decision to seek a fourth term, Shealy pointed to multiple issues – and state agencies – that she has been fighting to fix since becoming a leader in the S.C. Senate. Among those agencies? The S.C. Department of Juvenile Justice (SCDJJ) and the S.C. Department of Disabilities and Special Needs (SCDDSN).

You can read some recent coverage of those agencies by clicking here and here, respectively.

“There is still plenty of work to be done for foster children, adoptions, DJJ and our disability community. I have just begun the fight on DDSN,” Shealy told me.

Shealy could face a primary opponent due to positions she took during the contentious debate over abortion last year. Among those reportedly being eyed as prospective candidate for her seat is state representative RJ May III.

May is reportedly being touted by GOP lawmakers who want him out of the S.C. House of Representatives, where he has emerged as a leader of the conservative wing of this ostensibly “Republican-controlled” chamber.

Is May interested in running against Shealy? It certainly doesn’t look that way …

“Nobody has approached me about running for Senate but I am happy representing the people of (House) district 88,” May told me this week. “I have no plans to leave, I enjoy what we are doing here – making conservative changes to the way things are done in Columbia. We plan on making significant changes to the culture here, and I think the House is the best path to do that.”

Shealy, 68, was first elected to the S.C. Senate in 2012 – defeating incumbent “Republican” Jake Knotts as a petition candidate. She has caucused with the GOP ever since her election, and has won two terms as the Republican nominee for S.C. Senate District 23.

At the time of her election, Shealy was the only female member of the S.C. Senate. There are now five female senators in the 46-member chamber.

In addition to her legislative service, Shealy is well-known as an activist in the community. Her charity – Katrina’s Kids – provides assistance to foster children as well as children placed in group homes.

Yeah, why stay home and be there for your husband (“…in sickness and in health, tell death us do part.”) when you can be in the Legislature, basking in the glory of your own greatness. “I am woman. Hear me roar.” The world needs you as you try introducing more government into personal relationships and affairs, even school-age dating. You are not much different than the cad you replaced. Like him, you lack the self awareness of when it is time to let go of the spotlight, the power, and the glory; for your own good and that of the community which you purport to serve.

Dang Observer you must know her well, female version of Old Jake. Now that is funny.

Jbl1a, I found your assessment of her persona and general makeup to be spot-on as well! Excellent post!

OMG! There is an article in today’s The State (01-15-2022) about her. Apparently her and hubby are friends with Jakie! Again, she is so much like the company she keeps. Scary.

Bahahaha, another article with Shealy tooting her own horn. Yep she is really best at that. And this statement she made proves she is just another LIAR, “Shealy says she is committed to prioritizing the state’s most vulnerable, “. Well Katrina there is none more vunerable that the unborn in the mothers womb, NONE. You words and actions prove you have nothing in common with those who are truly prolife. Your only desire is for power and praise from others.

Observer, own up to who you are! Until you walk a mile in my shoes and are willing to say your name out loud , you are weak and spineless. I take care of my family. You should be ashamed of your comments. If you were a real observer you would understand the life of a caregiver – instead you are a self serving, inconsiderate, uneducated individual. God bless you and your family – hopefully you don’t need any caregivers in your life. You really are pitiful.

Shealy that sounds just just like you, smart ass, self serving, man hating womans libber. I bet you burned your bra and worshipped Gloria Steinham in your youth. You have done nothing for the voters of district 23, except toot your own horn about how great you are with your”for the kids” lines. Please don’t run again. You are only in it for yourself and your ego. Constituents are waking up to your nonsense. And your claim to prolife, either you are delusional or a liar. Remember “a womans right to choose is the superior choice”, your words even though you deny it

Oh Katrina, I know the life of a caregiver and I know it well. I have been caregiver to family members and friends with Alzheimer’s and cancer. It is challenging but I was glad to do it for the people I did it for. Go ahead, you can live in the spotlight as jbl1a correctly noted and keep tooting your horn for yourself, the wimmen and the chirren that you are always bleating about. No need to stay home and take care of hubby when you can let family and “the help” do it for you. Jbl1a also hit the nail squarely on the head about your apparent dislike of men; no doubt another reason to avoid being home with hubs in his hour of need.

Hang onto that Senate seat as by the looks of your photos, state rations and/or free lunches from lobbyists have been quite generous to you.

I refuse to respond to people who don’t have names.

You just did, witch!

Another interesting thing about Katrina, she was worshipful of the once king of corruption in SC, Hugh Leatherman. You are known by the company you keep, and her association and admiration of that greedy, corrupt, old POS says much about her and how she views her relationship to the peasants who vote for her. I hate admitting it now, but I actually signed the petition to get her on the ballot, years ago. I had high hopes for her but she turned out to be a dismal disappointment. Like Mick Mulvaney when he unseated John Spratt, Katrina unseating Jake was where any usefulness to the average voter in her district began and ended.

Holy cow, an actual slapfight in the comments. I like this direction. Will needs to furnish us some digital chairs to throw next.

These comments are soooo sexist. No one would expect a male legislator to step down because his wife had dementia!!!

Senator Shealy is one of the very, very few legislators who has demonstrated concern for persons in South Carolina once they leave the birth canal.

She has once again demonstrated courage against the regime that has illegally diverted Medicaid funds for years. I admire her courage.

Hilarious, Shealy has done very little for voters in 23. She voted for the higher gas tax. She has repeatedly voted for wasteful budgets and spending. She takes earmarks for charities of HER choice. In 2021 that was to the tune of 1 million taxpayer dollars. Heck at least ole Jake gave the honor roll kids a skating party to bribe the parents, lol. Good legislators don’t have to cry how good they are and she certainly does. And I would expect ANY man to take proper care of his wife if she is ailing, legislator or not.