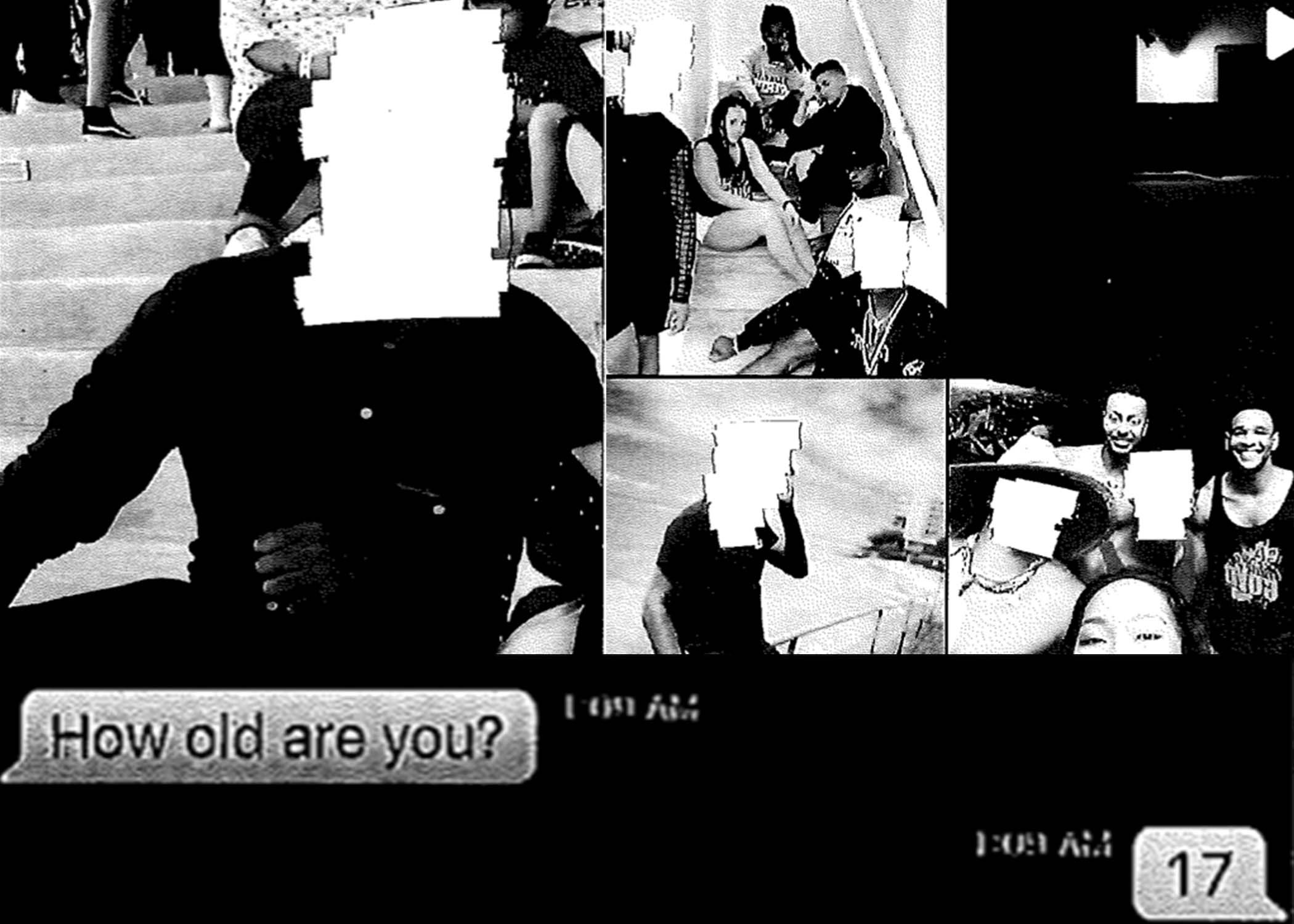 by DYLAN NOLAN and JENN WOOD

The series of federal lawsuits alleging both specific acts of sexual abuse against underaged cheer athletes – and systemic failures that led to the industry-wide epidemic – has expanded beyond the southeastern region of the United States.

A new lawsuit filed on November 28, 2022 in U.S. district court in Cleveland, Ohio – more than 1,000 miles away from the courthouse in Florida where disturbingly similar allegations were made earlier that same month – alleges cheer choreographers Brandon Hale and Taji Davis knowingly had sex with a minor athlete. The suit further alleged that the cheer industry’s governing body, known as the U.S. All Star Federation (USASF), failed to enforce sanctions to prevent the two choreographers from continuing to have access to minor athletes.

Filed on the behalf of an anonymous John Doe by attorneys with the Columbia, South Carolina-based Strom Law Firm – as well as attorneys with the Columbus, Ohio-based Cooper Elliott Law Firm and Charleston, S.C.-based Gaffney and Lewis – the suit named not only the individual coaches, but also ShowPro Choreography and a litany of related business entities and individuals tied to Varsity Spirit, the company which dominates the American competitive cheer marketplace.


All of these entities created a culture permissive of sexual abuse, the suit (.pdf) alleged.

Hale and Davis are alleged to have had a professional relationship with the minor athlete that began when he was fifteen years old. The two men choreographed a routine at his gym.

Their services were used by multiple gyms in the area and, as such, they met Doe again when they choreographed a routine at his new gym the following season.

When Doe was 17 years old, the pair returned to Ohio.  This time their interaction occurred outside of the gym. Doe encountered one of the choreographers on a dating app and began to exchange messages confirming their identity and what brought them back to town. 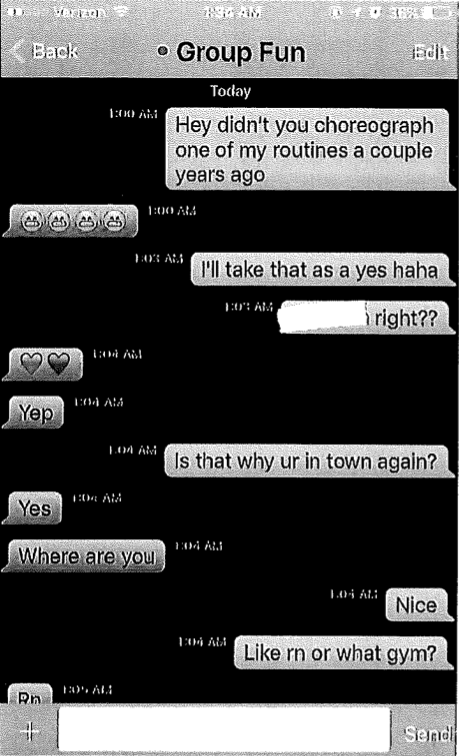 After discussing what gym and team Doe currently cheered with, one of the choreographers confirmed Doe’s age before inviting him to their hotel room.

Doe demurred, suggesting they meet the next day, only to be asked to get an Uber.

Doe ultimately decided to go to their hotel – and was immediately offered Jack Daniels and “poppers” (and inhaled drug commonly used in the gay community to relax the anus).  He refused both. The suit alleges that Doe had sex with Davis and Hale, who were 24 and 25 at the time of the encounter.

It would take Doe years to process this encounter.  On June 20, 2020, he sent an anonymous email to two gyms – California Allstars Ventura and Cheer Extreme Allstars in North Carolina – describing the tryst and adding that he disclosed the encounter to some of his friends, resulting in the owners of his gym calling a meeting with Doe and his parents.

“I denied everything,” Doe wrote. “I was scared, as grown as I thought I was, as close to 18 as I was, I was still a kid, I lied just to make it go away.  I thought I would get in trouble with both my parents and the gym.  After all, I went on my own volition and they never forced me to do anything.  But these grown men persuaded an underaged child, whom they had known since he was fifteen, into a sexual encounter.”

“These leaders in the cheer community took advantage of a minor.  They broke the law.  This whole series of events is wrong, not just on a legal level but a moral one.  At 21 years of age, I could not imagine being with someone even two years younger than myself.   I have also come to realize that if this happened to me who knows how many other boys this has happened to and continues to happen to.”

Cheer Extreme Allstars, itself facing a federal lawsuit, failed to respond to the email.

California Allstars responded, encouraging Doe to formally report the incident to cheer regulators and law enforcement authorities, which he did.

On June 25, 2020 a report was filed with the USASF.  The organization’s vice president Amy Clark notified the Westlake Police Department, which has jurisdiction over the area where the encounter occurred.

“Thank you for taking the report from our internal SafeSport administrator. She will encourage the victim to come forward and pursue charges. I would like to share this perspective for both of you and your Lieutenant as well. We have a situation here, if true, where someone that was 7 years older than the minor invited an interaction that we could all agree was, at minimum, inappropriate. Their relationship and interaction was originally introduced as the minors [sic] participation in the sport – with an outside choreographer who came to his gym. They met because of the sport.

The older person (24 years of age), who asked a minor (17 years of age) to come to his hotel room at 1:30 am – held what could be argued as a position of power over him. Although the age of consent is 16 in the state of Ohio, the difference in age was 7 years.

And, is there a legal, moral, or ethical duty to investigate this situation even if the victim does not want to press charges?…I just have concerns that if it is not pursued – someone may find all of us negligent in our duty to protect minor athletes.”

Clark also reminded investigators Ohio’s age of consent “is 16, so 16- and 17-year-olds can legally engage in sexual conduct with an adult.”

“However, an adult can still be convicted of statutory rape of a 16- or 17-year old if he is in a position of power over the minor,” she continued. “Sexual conduct between a student and a teacher, or a student-athlete and a coach, would fall into this category.”

It seemed as though USASF executives were taking the incident seriously, but something changed.

On July 30, 2020, Doe was told law enforcement could not press charges because he was over the age of consent – and due to concerns regarding the crime’s statute of limitations.

By September, USASF confirmed to Doe that an outside firm had been brought in to conduct an independent investigation.  Doe continued to follow up with officials asking about the status of the investigation, but was not informed when Hale and Davis’ temporary ineligible status was lifted on November 19, 2020.

When Doe eventually learned of their reinstatement, he asked to speak with Clark – but she told him that he instead would be speaking with USASF attorneys.

The lawsuit contains a transcript of the call, in which the attorney cited a private investigator named “Detective Hale” who “reported to us that he had to conclude that the proof did not establish a violation that occurred.”

“You testified that you were abused and they denied it,” the private investigator said. “And there was no witness to support your claims.  So in other words, he told us he couldn’t go one way or the other.  So it’s really what we call a draw.  So our hands are tied.  It’s going to have to be closed, as far as we’re concerned, has been closed.”

Indignant, Doe replied, “So I just – I also just want to be clear … me having screenshots of messages of them soliciting me to come to their hotel room at 1:00 in the morning, knowing that I’m a minor, as well as having at least three other people confirm my story to the investigator, that is not sufficient evidence.  Is that – is that what you are saying?”

In the eyes of the Varsity Spirit controlled USASF, it wasn’t enough.

After the investigation by Ohio police in 2020, Brandon Hale once again came to the attention of USASF after an incident between him and his boyfriend in Mexico. This incident was exposed in USA Today by reporter Marisa Kwiatkowski in an article which referenced a livestream Hale posted after allegedly pushing his boyfriend off a balcony.

Hale was arrested by Mexican authorities and was suspended by the USASF the day of his livestream, but according to Kwitkowski’s article, just “two days after the incident, a Florida gym owner offered him $5,000 to agree to Hale’s release from custody.”

Hale was once again removed from the unified ineligible list by USASF officials.

Varsity Spirt stands alongside its owners – Bain Capital and Charlesbank Capital Partners – as the number of lawsuits alleging a systemic failure to protect minor athletes from the predations of sexually deviant members of the cheer industry keeps expanding.

In an effort to counter this narrative, Varsity recently retained prominent defamation attorney Thomas A. Clare of the Alexandria, Virginia-based Clare Locke Law Firm. Clare cited “multiple false and defamatory statements you and members of your firm have made in the press and in court pleadings, unsupported by any evidence, and made in reckless disregard for the truth” in a letter sent to attorneys at the Strom Law Firm.

As noted on our ‘Cheer Incorporated’ podcast (Apple, Spotify), “our microphones are always on and always open to anyone with an impactful take on this story – which includes opening our microphones to those named in these lawsuits.”

We at FITSNews are proud of our open microphone policy and welcome defendants or their representatives to join the conversation on our platform.  We also encourage those with relevant information to contact FITSNews director of research Jenn Wood at research@fitsnews.com.