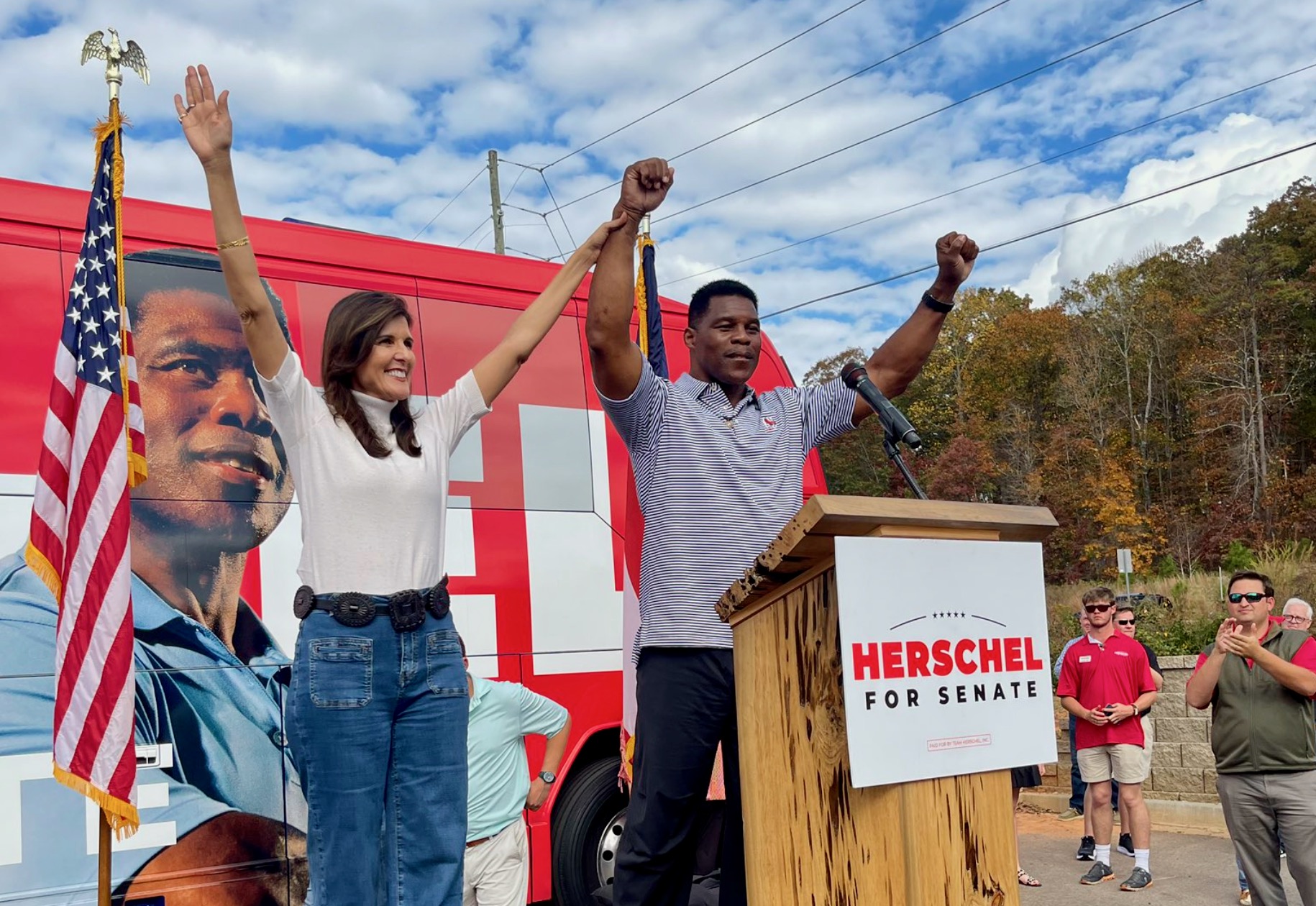 Politicians don’t need your money. Seriously. Not a friggin’ penny of it. They are getting paid by the bucketload from wealthy special interests who proceed to push their buttons like the dutiful devices they are and pull their strings like marionettes.

But if you needed another reason not to donate to a political campaign, look no further than the fiasco unfolding across the Savannah River in the state of Georgia – the site of the last unresolved U.S. Senate race of the 2022 election cycle.

Democrats have already secured control of the upper chamber of the U.S. Congress, but the December 6, 2022 runoff election between GOP nominee Herschel Walker – the 1980 Heisman Trophy winner – and incumbent Democrat Raphael Warnock still has national significance.

Accordingly, top tier “Republican” politicians – especially those running for president (or thinking about it) – are pulling out all the stops as part of their effort to propel Walker to victory in this erstwhile red state.

Do they really care about supporting Walker? Or are they more interested in profiting from the perception they are supporting him?

Earlier this week, I was sent an email from former South Carolina governor Nikki Haley’s political action committee, Stand for America. The subject of the email? “Don’t abandon Herschel Walker on the 1-yard-line.”

I wasn’t aware I had supported Walker on any yard line, but …

“I know I’ve asked a lot from you, Patriot,” Haley’s email noted. “But the 2022 election just went into overtime, and a repeat defeat simply isn’t an option.”

In urging me to support Walker financially, Haley’s email linked to a so-called “runoff action fund” – a website which solicited donations as it bemoaned the tens of millions of dollars Warnock has “raised from liberal donors all over the country.”


“Help Herschel Walker DEFEAT Raphael Warnock and FLIP Georgia RED (emphasis original),” the website implored, asking if I would be willing to chip in as much as “$500 or more right now.”

Worth perusing? The fine print.

“Your contribution will benefit Stand for America PAC and Team Herschel, Inc.,” a notification from the WinRed fundraising platform noted.

The page did not break down the percentage of donations that would go to Walker – or what percentage would to go Haley’s group – but Walker’s campaign previously sounded an alarm about GOP candidates using his election to raise money for themselves, not for the candidate.

“The companies and consultants raising money off this need to cut it out,” Walker’s campaign manager Scott Paradise told NBC’s Mark Caputo earlier this week. “We need everyone focused on winning the Georgia Senate race, and deceptive fundraising tactics by teams that just won their races are siphoning money away from Georgia.”

According to Caputo’s report, Walker’s campaign “first noticed the problem” when fundraising appeals from former U.S. president Donald Trump wound up routing only ten percent of proceeds from donations to Walker’s candidacy.

Trump’s organization switched its funding breakdown to a 50-50 split between the two campaigns after getting called out on Twitter – but numerous other political organizations were still defaulting to a 90-10 ratio (meaning Walker’s campaign was only getting a dime for every dollar donated to help him).

In other words, they would do it out of the goodness of their hearts (although that assumes there is any goodness in their hearts). They wouldn’t pretend to help him while ripping people off.

I have no real interest in the outcome of the Georgia race, but as these national candidates begin pouring across the border to position themselves ahead of the Palmetto State’s 2024 “First in the South” presidential primary, this should be a key indicator for GOP partisans.