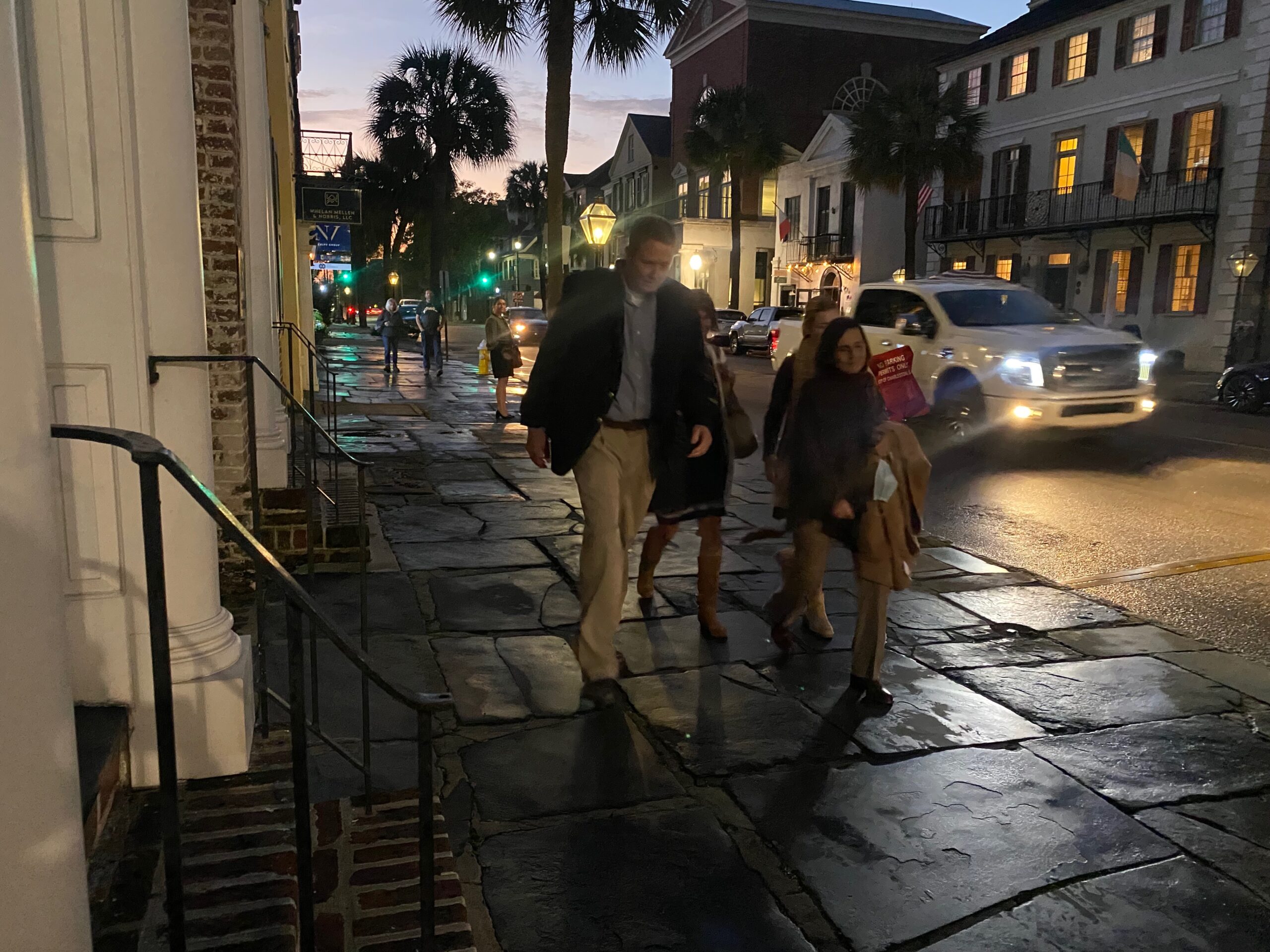 by JENN WOOD, DYLAN NOLAN and WILL FOLKS

Federal prosecutors came into the trial of disgraced South Carolina banker Russell Laffitte on the defensive. On Tuesday afternoon, they rested their case against the 51-year-old Hampton, S.C. native – the first defendant in the ‘Murdaugh Murders’ crime and corruption saga – in what certainly appears to be a position of absolute strength.

Led by assistant U.S. attorney Emily Limehouse, the government actually trimmed its roster of witnesses heading into this week because the case against Laffitte had already been made so emphatically.

Over the past week-and-a-half, the former chief executive officer of Hampton, S.C.-based Palmetto State Bank (PSB) has been thoroughly exposed by evidence and testimony as a man who obtained nearly half a million dollars serving as a conservator to victims of disbarred attorney/ accused killer Alex Murdaugh.

Laffitte was paid to protect these individuals – but instead conspired with Murdaugh to raid their accounts, according to witnesses and evidence.

Was anyone else involved in this conspiracy? That was the big question headed into this trial – and it remains the big question as Laffitte’s lawyers prepare to make their case beginning Wednesday morning (November 16, 2022).

So far, Laffitte’s attorneys haven’t offered up anything to prove the existence of this broader conspiracy, however. And even if they do, it remains unclear how that would absolve Laffitte of the crimes he is accused of committing.

If anything, the “broader conspiracy” could very well be efforts by bank officials to cover up what Laffitte appears to have hidden from them.

The final day of the prosecution’s case was every bit as damning and compelling for Laffitte as its first day. The first witness called by the prosecution on Tuesday was Timothy Rich, deputy regional director of the Atlanta office of the Federal Deposit Insurance Corporation (FDIC).


After explaining the role of the FDIC and his background, Rich was certified as an expert witness.

PSB was FDIC insured during Laffitte’s tenure there – including his stint as CEO following the retirement of his father, Charlie Laffitte, in June of 2020. Laffitte was fired from PSB in January of this year. Four months later he was indicted by state prosecutors on multiple criminal conspiracy charges tied to his alleged role in Murdaugh’s schemes. In late July, he was hit with a five-count federal indictment alleging bank fraud, wire fraud, misapplication of bank funds and conspiracy to commit bank fraud and wire fraud in connection with those schemes.

Those are the charges he is facing this week in U.S. district court in Charleston, S.C. before a jury of his peers.

During his testimony, Rich noted he is responsible for all of the approximately 600-700 banks in the southeast region – including PSB. At the request of the federal prosecutors, he reviewed previously introduced documents related to the bank and the charges filed against Laffitte.

Much of Rich’s testimony centered on the three counts of misapplication of bank funds Laffitte is facing. After detailing Rich’s qualifications, Limehouse asked him to explain to the court some basics about loan practices in banking – specifically asking him to go into detail about the stated purpose of loans. Rich testified that if a loan officer knows a customer isn’t going to use funds for the stated purpose of a loan, it goes against the safe and sound banking practices expected by the FDIC.

Laffitte is accused of approving a $500,000 farm loan to Alex Murdaugh on February 15, 2015 of which the government alleges $284,787.52 was used to pay loans extended to him from the conservatorship of Hannah Plyler – one of the victims in this case.

Plyer – who testified on Monday along with her sister, Alania Plyer Spahn – was a passenger in a 1999 Ford Explorer that crashed on July 16, 2005 on Interstate 95 following a tire tread separation. The accident killed their mother, Angela, and brother, Justin – and left Alania and Hannah with serious injuries.

Murdaugh represented the Plylers in a product liability case against Ford/ Firestone and Laffitte served as their conservator beginning in November 2006 – even though they lived in Lexington County at the time and had no previous connections to him.

Rich testified that the farm loan extended to Murdaugh should have been used for either a farming capital expenditure – such as a tractor or harvesting equipment – or for production lending such as fertilizer, seed, or diesel fuel. During his testimony, he stated his review showed that Laffitte had signed both the loan and was also the person making the decisions on how to use the funds.

Limehouse (above) continued her questioning of Rich by asking about a $750,000 home renovation loan extended by Laffitte to Murdaugh in July of 2021 shortly after the murder of his wife and son on June 7, 2021.

Murdaugh, incidentally, has been charged with the murder of his family members – and during the trial it was revealed he was first confronted about his financial schemes on the morning the killings took place.

Instead of the proceeds being used for home renovations, Rich testified that $350,000 from this loan was transferred on July 15, 2021 to attorney Chris Wilson of Bamberg, S.C. – an attorney who was owed money in connection with a case he had worked with Murdaugh. The remaining $400,000 was transferred to Murdaugh’s personal account on August 8, 2021 to cover a large overdraft before the loan approval paperwork was finalized on August 18,  2021.

Rich testified none of this was consistent with safe and sound FDIC practices as ”the funds went out the door before the loan was approved – before the people responsible for approving the loans approved it.”

Previously in this case, PSB board members testified about their knowledge and approval of a controversial $680,000 payment from the bank to Murdaugh’s law firm – formerly known as Peters, Murdaugh, Parker, Eltzroth & Detrick, P.A. (PMPED) – in October 2021 not long after Murdaugh allegedly attempted suicide by hiring one of his check cashers, Curtis “Eddie” Smith, to shoot him in the head in a bizarre roadside incident that attracted international headlines.

As previously reported, the $680,000 payment stems from a civil settlement tied to the death of Donna Badger, an Allendale County woman who was killed in a 2011 car crash.

Badger’s husband, Arthur Badger, was the driver of a vehicle involved in a collision with a UPS truck. The accident took the life of his wife as well as another family member – and left Badger the single father of seven children. Badger hired Murdaugh to represent him in a civil lawsuit and was initially appointed as the personal representative of his wife Donna’s estate before Laffitte took over for him.

Regular members of our audience know Murdaugh is already facing state charges tied to the Badger case – specifically the alleged theft of more than $1.33 million from Arthur Badger between February 2013 and June 2014.

Rich was asked to provide his expert opinion on this $680,000 payment – specifically whether Laffitte had the authority to make it.

“(Laffitte) noted that he negotiated with the law firm,” Rich testified, noting that “a key distinction is that the bylaws show that the difference between responsibilities of CEO and executive committee are settlement negotiations, so from that standpoint it seems that the CEO didn’t have the authority to enter into the settlement.”

Rich further stated that on matters such as this, all voting members of the executive committee should have been consulted and a majority must approve – pointing out that they can’t just find a majority who approve and not tell the rest of the committee because “everyone should be consulted in the committee.”


Next, prosecutors called Mark Altman to the stand. Altman is the vice president of information technology for PSB, and his testimony proved critical for the government – showing how Laffitte accessed Alex Murdaugh’s accounts prior to many of the transactions the government has focused on in its indictment.

Alleged victims of Alex Murdaugh – Badger and Natasha Thomas – followed Altman on the stand. Thomas was a client of Murdaugh’ who sustained injuries as a passenger in an automobile accident in 2009. Murdaugh represented Natasha, her cousin Hakeem Pinckney and her aunt – all of whom were injured in the crash. Despite being nineteen – past the age when a conservator would have been required by law – Laffitte became Thomas’s conservator.

Thomas testified that she did not know Laffitte had assumed this role – or that he had received a $15,000 payment for doing so. Of the settlement funds Thomas received, she never received $325,000 because it was allegedly diverted by Laffitte and Murdaugh to repay the loans from Hannah Plyler’s account – as well as repaying debts incurred by Murdaugh to other family members and associates.

Badger testified he was not aware that Laffitte was serving as the personal representative for his wife’s estate nor did he recall signing the paperwork that indicated he resigned control of it. Laffitte is accused of helping Murdaugh divert the $1.33 million from Badger’s settlement to make payments to benefit Murdaugh personally including a payment of $369,889 to his former law parter Johnny Parker and $151,726 and $101,369 payments towards loans taken from Hannah Plyler.

The government rested its case after hearing testimony from agent Brian Womble of the Federal Bureau of Investigation (FBI). Womble was a very effective witness – sharing details of his investigation into the Murdaugh case in a concise, matter-of-fact manner to the court. Among the details we learned from Womble was that Malik Williams – an alleged victim of Murdaugh’s financial crimes – was not even a client of Murdaugh, but another PMPED attorney, Paul Dietrich. Womble told the court he did not see any evidence that Murdaugh knew about the William’s account – implying the only way Murdaugh would have known was through Laffitte.

Womble – who unlike other witnesses wasn’t sequestered – was able to hear much of the prior testimony in this case.  This opened him up to many lines of inquiry by Laffitte’s lawyers – former U.S. attorney Bart Daniel and former federal prosecutor Matt Austin.

Having listened to Daniel’s cross-examination approach all week, Womble seemed eager to answer the defense’s every question – demonstrating how witnesses can be every bit as effective for the prosecution on cross examination as they are when being directly examined by the government.

Womble closed his testimony by telling the court Laffitte earned a total of $458,000 in conservator fees from his victims.

On that note, the prosecution rested its case and handed the reins over to the defense attorneys.

How will they begin chipping away at case made against their client? And how will the government poke holes in Laffitte’s defense?

According to my sources, the defense’s case is expected to run for at least three days – Wednesday, Friday and next Monday.