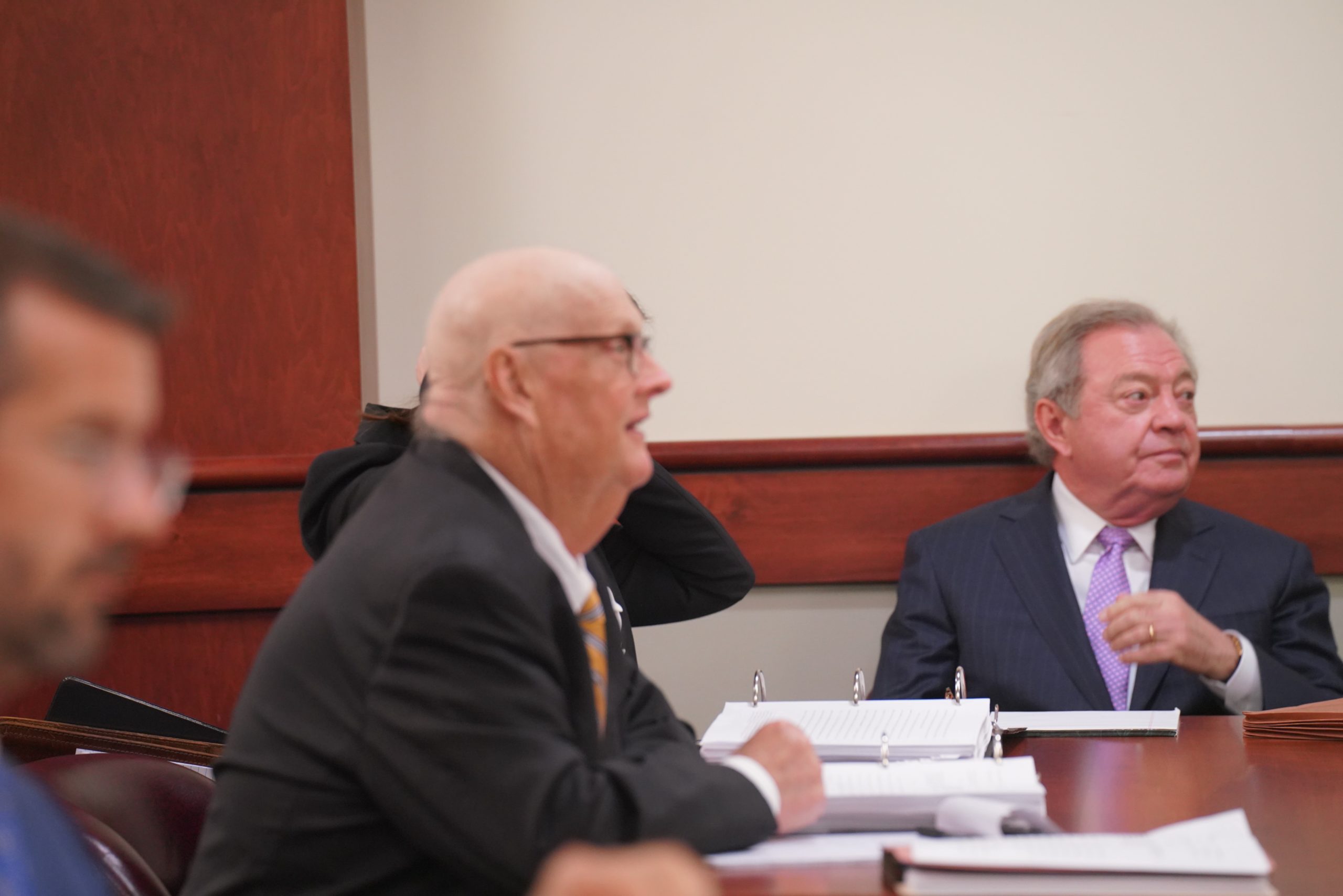 While the criminal case against disgraced South Carolina attorney Alex Murdaugh escalates — including fresh indictments issued earlier this week — the civil case over his assets ramped up during a contentious court hearing Friday in Lexington County.

As our executive editor Liz Farrell reported earlier this week, Murdaugh’s attorneys — including “bulldogs” Dick Harpootlian and Jim Griffin — have been “pulling out all the stops to regain full control of Alex’s finances.”

Specifically, Harpootlian is attempting to convince S.C. circuit court judge Daniel Hall to return control of Murdaugh’s assets to the man at the center of a sprawling web of alleged criminality.


Since November, Murdaugh’s finances have been under the control of a co-receivership tasked with combing through his assets. As Farrell reported, the receivers — attorneys John T. Lay and Peter McCoy — were appointed because evidence suggested that the Murdaugh family was moving and hiding money from potential creditors, including multiple plaintiffs.

Such moves could conceivably limit the amount of money available to settle civil cases with Murdaugh’s growing list of alleged victims — not to mention potentially aid and abet further criminal activity.

Hall made it clear he had no plans to rule on any of the motions Friday, but Harpootlian repeatedly bullied the judge — claiming his failure to return control of Murdaugh’s assets would set precedent in thousands of cases.

Harpootlian told the court he planned to file a motion in a separate case to appoint a receiver because he believed the Murdaugh case was setting a precedent as it related to tort law.

“This case is all about the money — and the money is governed by statutes,” Harpootlian said, repeatedly referring to his intention to exploit a so-called “Murdaugh loophole” to go after the assets of corporations in liability cases.

“The precedent you set here today will be seized upon by every plaintiff’s lawyer in the state,” Harpootlian said. ”This order will open Pandora’s Box for every plaintiff.”

Prior to the hearing, Harpootlian was even more reckless with his tongue, commenting in an open courtroom that “it’s not often a black judge sets a bond like that” referring to judge Alison Lee’s decision Friday morning to set a $1 million bond for his client’s co-defendant Russell Lafitte.

Lee is the same judge who set Alex Murdaugh’s bond at $7 million, which sent Harpootlian sputtering.

Harpootlian and Griffin say the receivership should at the very least be altered to give Murdaugh more access to spending money.

Beach attorney Mark Tinsley argued that Murdaugh could go through the receivership.

“If Alex Murdaugh needs more meat sticks than he is winning in the jail, he can petition the court for another $60,” Tinsley said, referring to purchases Murdaugh has made in jail, as well as Murdaugh’s admission to his son during a phone call from jail that he had won beef sticks by gambling on a football game.

Stunningly, Harpootlian — who is fighting against the further release of Murdaugh’s jailhouse calls — seemed not to understand the reference: “He’s not buying any more meat sticks.”

Tinsley also argued that efforts by the Murdaugh family to pay off a loan taken out by Alex’s late father, Randolph Murdaugh III, are evidence that a receivership is needed in this case.

“I suggest to the court that indicates fraud in and of itself,” Tinsley said. “They were not going to dispute anything claimed by the bank.”

During his testimony before the court, Lay argued against Harpootlian’s claims.

“The case law is there for a receivership,” Lay said. “It’s extraordinarily hyperbolic to suggest the bottom is going to fall out.”

According to Lay, Harpootlian’s characterization was “not realistic.”

“This is a unique — by any definition — (and) complicated case,” Lay said. “The system needs us involved in this case.”

Harpootlian fired back, claiming all of Alex Murdaugh’s alleged victims had been paid “in full” by his former law firm and that Hall’s previous order was “ridiculously broad.”

Lawyers for Parker’s Kitchen and Gregory M. Parker Inc. — including a lawyer from newly elected South Carolina House speaker Murrell Smith’s law office — were present at the hearing Friday as well. Parker’s and its affiliates are also defendants in the Beach case.

In trying to set a date for trial, Tinsley accused Parker’s attorneys of intentionally hampering the process.

“They’re trying to get it delayed indefinitely,” Tinsley told Hall.

Hall told all parties “I am strongly suggesting y’all look at Dec. 5.”

‘Neither of these statements are true’

On Thursday, Lay filed a scathing affidavit in response to one filed by Murdaugh’s younger brother John Marvin Murdaugh, who was present at Friday’s hearing.

As FITSNews reported earlier in the day, John Marvin Murdaugh had issued his sworn statement to the court Tuesday in favor of ending the receivership.

His argument included a list of around $725,000 in Murdaugh’s assets that John Marvin says he had liquidated on his behalf in the lead-up to the court appointing a receivership in November 2021.

Tinsley had asked the court to appoint a receivership in large part because of these seemingly hasty transactions that appeared to benefit the Murdaugh family directly.

John Marvin has maintained that he acted in good faith and in full transparency.

Lay, however, disagrees. While it’s true that John Marvin provided a list of sold assets, he did not include the dates of those transactions.

John Marvin sold the assets to friends, family members and other Murdaugh associates. He said the money raised from those sales went toward his brother’s medical bills and paying down loans from Palmetto State Bank, including one for around $600,000 that had been taken out by Alex and their father.

Earlier Friday morning, former CEO of the bank Russell Laffitte was granted a $1 million bond and placed on house arrest after the state grand jury handed down three indictments against him, including 21 felony charges related to alleged fraud. Laffitte stands accused of conspiring with Alex Murdaugh to steal nearly $2 million from vulnerable clients.

In his affidavit, Lay noted that this loan was not secured by any assets of Alex Murdaugh.

He also pointed out that the elder Murdaugh died on June 10, 2021, yet it wasn’t until Sept. 13 that Palmetto State Bank filed creditors’ claims against Randolph’s estate.

Those dates are significant because it is in early September that Alex Murdaugh’s alleged criminal behavior became publicly known. The plaintiffs suggest that Alex’s family then kicked into gear to move, hide and liquidate his assets, inappropriately prioritizing creditors in the meantime.

John Marvin contends that a share of Green Swamp Hunting Club was used as collateral for “the beach house loan” and that the $250,000 raised from its sale went toward paying down the loan.

“Based on my understanding of the term ‘the beach house loan,’ neither of these statements are true,” Lay wrote, referring to a mortgage that was taken out on Maggie Murdaugh’s Edisto Beach home.

On a related note, Judge Hall approved the sale of the Edisto Beach house Friday for $955,000, which is $35,000 above the asking price. Just over $200,000 of that money will go to Palmetto State Bank for payoff of the mortgage.

In their second update to the court on their progressing combing through Alex Murdaugh’s assets, Lay and McCoy said the process continues to be “complicated.”

Sixty-seven subpoenas have been issued in the past six months.

“The complexity of Alex Murdaugh’s financial maneuvers and the steps necessary to recover assets due to such complexity support the need and importance for the receivership.”

The receivership remains necessary, they wrote, because of Murdaugh’s continued attempts to “subvert” their efforts.

They cited an attempt Murdaugh made in March to disclaim his interest in Maggie Murdaugh’s estate, which they said violated the court order. On Friday, Judge Hall did not take up arguments for finding Murdaugh in contempt of court and ordering sanctions against Murdaugh, something the co-receivers requested immediately after discovering Murdaugh’s filing in Probate Court.

“This has been a massive investigatory effort due to Alex Murdaugh’s intentional obfuscation of his financial positions.”

Information gleaned from alleged co-conspirator Russell Laffitte during their first deposition with him is being used to collect assets for the “receivership estate.”

The work of locating Murdaugh’s assets and totaling his total worth includes negotiating the terms of loans Murdaugh allegedly had through Palmetto State Bank and maximizing profit in the sales of property.

The co-receivers note that their intervention in the sales of Murdaugh’s property has resulted in substantially more money than the deals that Murdaugh’s family was considering entering into around the time the receivership began.

The report outlines several other pending sales of property owned by Murdaugh.

“Prior to the injunction, the Murdaugh family disposed of Alex Murdaugh’s assets and funneled the profits or assets to preferred creditors.”

The co-receivership was “vital,” they say to “halt these preferential transfers.”

The report cites John Marvin Murdaugh’s and Buster Murdaugh’s decision to pay more than $400,000 toward a $600,000 loan allegedly owed to Palmetto State Bank by Alex and his father as evidence of the Murdaughs’ continue efforts to retain assets for their own benefit.

“If these and other transactions cannot be unwound by negotiation, the co-receivers will need to litigate these issues.”

‘Death Isn’t The Only Thing That Quantifies This’: Lowcountry Reporter Hospitalized With COVID-19