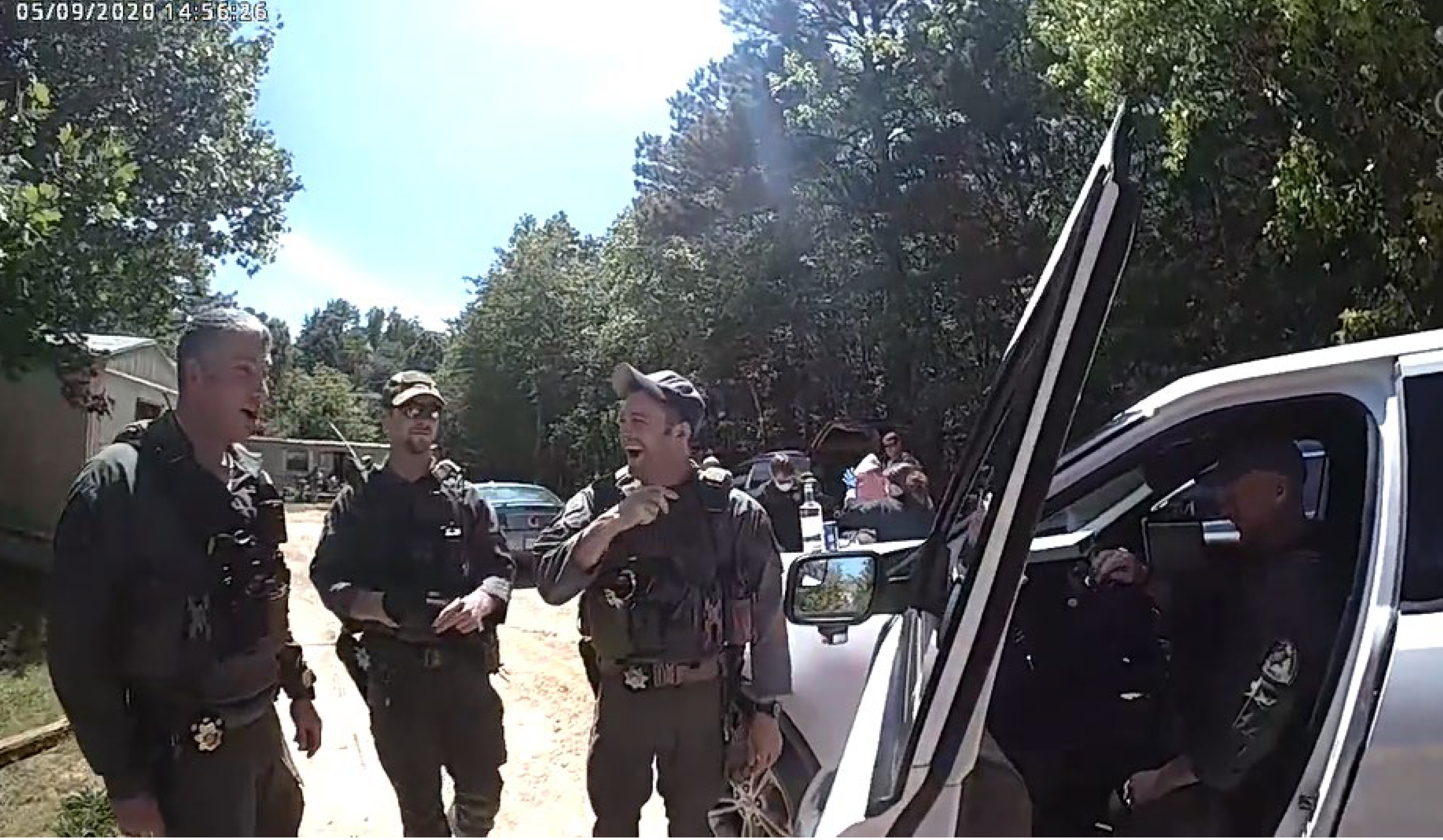 A new lawsuit accuses Greenville County Sheriff’s Office of using “military style police units” to beat and mock a mentally disabled man during a traffic stop in May 2020.

The deputies — whom the lawsuit accuses of arriving on scene “ready for battle” — later laughed on camera about how the man had urinated himself during the arrest and told them he was “in special ed classes growing up,” according to a disturbing video that accompanies the complaint.

After his arrest, Kenneth Robert Langford of Greenville County, was hospitalized for 16 days, including four days in intensive care. He was diagnosed with “acute chest and shoulder pain, facial trauma with right orbital fracture and trauma to left eye, multiple abrasions and lacerations to his face with a pebble embedded in his forehead.”

He also had a dislocated shoulder, multiple fracture ribs and “was in tachycardia,” according to the lawsuit.

“The GCSO has a long and well-documented history of excessive force and of employing military-style police units to certain neighborhoods who behave aggressively and violently toward residents, and then publicly denying the existence of these units when the cases draw media attention,” the lawsuit asserts.

The complaint names seven deputies in the lawsuit, but specifically comments on the actions of three of them — Deputy Ryan Humburg, Deputy Pierce Frazile and Sgt. Bradley Grice — saying they have “a well-documented history of disciplinary issues.”

“Due to the nature of ongoing litigation we cannot say too much beyond the allegations of the pleadings at this time but we stand by those allegations and look forward to our day in Court,” White said on Tuesday.

Greenville County Sheriff’s Office spokesperson Lt. Ryan Flood said in an email Friday that “consistent with any and all pending litigation we will refrain from comment in an effort to protect the integrity of the investigation.”

Flood said that the Sheriff’s Office did not receive a formal complaint about the Langford arrest and therefore did not conduct an internal investigation regarding “any disciplinary issues.”

“An RTA (Response to Aggression) analysis was completed and signed off by the deputies’ unit supervisors,” Flood said.

Around 2:30 p.m. May 9, 2020, Langford was traveling to Chapel Road in Greenville, S.C., when “Deputy John James with the Greenville County Sheriff’s Office initiated a traffic stop on his vehicle.”

The lawsuit says that Langford “suffers from diagnosed mental health issues that would have been apparent to any reasonable and competent responding officer.”

Langford got out of his car and James “immediately radioed for backup on the alleged basis Plaintiff was looking through his center console.”

The lawsuit says Langford stayed by his car and was speaking to James when six other deputies showed up.

“These officers were wearing military-style uniforms and appeared ready for battle upon arrival.”

This is when deputies began their “unprovoked beating of a mentally disabled individual” without warning or provocation, the suit says.

Multiple deputies allegedly grabbed Langford to “forcibly relocate” him away from his vehicle.

Langford, the suit alleges, was slammed onto the hood of a car.

The deputies “then continued wrestling him and knocked his feet out from under him, causing him to fall violently to the ground.”

Lawyers for Langford included a link in the lawsuit to the video below:

The lawsuit describes how the deputies piled onto Langford and began beating him “by repeatedly punching and striking him, despite the fact that the plaintiff was not resisting in any way.”

“I struck the area on the subject several times with an empty closed fist.”

At one point during the interaction, Langford “urinated on himself.”

Meanwhile, the suit says, while Langford was lying on the ground injured, “moaning and crying out in pain,” deputies continued to mock him staying, “What the f— is wrong with you?” and “Shut the f— up.”

As Langford was “screaming” in pain, the deputies allegedly walked away laughing and stating, “He pissed himself.”

After Langford was detained, one deputy explained to him that “the reason they had just violently beaten him was that he ‘tensed up’ on them.”

Read the full lawsuit below:


“Shockingly, body cam footage from after the attack shows the officers laughing and joking about the violence they had just inflicted on the Plaintiff, indicating among other things that he was “in special ed classes growing up.”

After an investigation by South Carolina Law Enforcement Division last year, a former Greenville County deputy was arrested and charged with third-degree assault and battery, misconduct and misconduct in office.

That arrest came one week after SLED arrested another former deputy and charged him with first-degree criminal sexual conduct, kidnapping, first-degree burglary, possession of a weapon during a violent crime and misconduct in office. The former deputy was accused of sexually assaulting a woman while on duty in October 2020, according to reports.

At least five personal injury lawsuits have been filed against the Greenville County Sheriff’s Office alleging aggressive behavior since Jan. 1, 2021, according to a search of the public index.

In one case, a woman said she spent 20 days in jail for a crime she didn’t commit. The woman said she tried to show deputies her phone to prove she wasn’t at the location where a theft had occurred. When deputies checked her phone 15 days later, they reported that the likelihood of the woman having committed the crime had “greatly diminished.” But it was another five days before the woman was released from jail.

In another case a woman says she was physically assaulted during her arrest and told to “urinate on herself.” The woman said she was forced to sit in her own urine for about an hour before deputies removed her restraints. She said she was not given a mattress to sleep on, nor shoes to wear while in jail and developed pneumonia while in custody. The woman was charged with public disorderly conduct, despite being on her property at the time of the alleged offense, as well as two counts of assaulting an officer while resisting arrest. All three of those charges were dismissed, according to the lawsuit, which was filed Feb. 22, 2021.


Two days later, a man filed a lawsuit accusing the Sheriff’s Office of rolling up on him while he was walking on a sidewalk in Greenville. The man said the deputy asked him for identification so he reached in his backpack to get it, which caused the deputy to grab him by the arm and throat. The man was taken to the ground, where the deputy allegedly threatened to get his K9 to bite him and struck the man in the face with his fist. The lawsuit contends that the deputy then turned off the audio on his body cam at this point, turning it back on only when backup arrived. The deputy alleged that he had seen the man swallow a hypodermic needle. A medical examination found no evidence to support this, according to the lawsuit.

Another woman filed a lawsuit in June 2021, accusing deputies of denying her access to insulin despite several warnings to them about the severity of her diabetes. The lawsuit alleges that deputies “forced the plaintiff to urinate on herself.” The woman lost consciousness as a result of being denied insulin, the lawsuit states, and fell, striking her head and injuring her back and right side of her body. She was taken to the hospital and not given clean clothes, forcing her to sit in urine soaked pants, the suit states.

Last month, a man filed a lawsuit accusing deputies of violently tackling him while he attempted to film them arresting his father. Deputies approached him “in an aggressive manner even though he was lawfully on his father’s property and was not obstructing or hampering any Police activities.” A deputy “suddenly and unexpectedly snatched” the man to allegedly place him under arrest, according to the suit. The deputy charged at the man and took him to the ground, resulting in “severe injuries.”