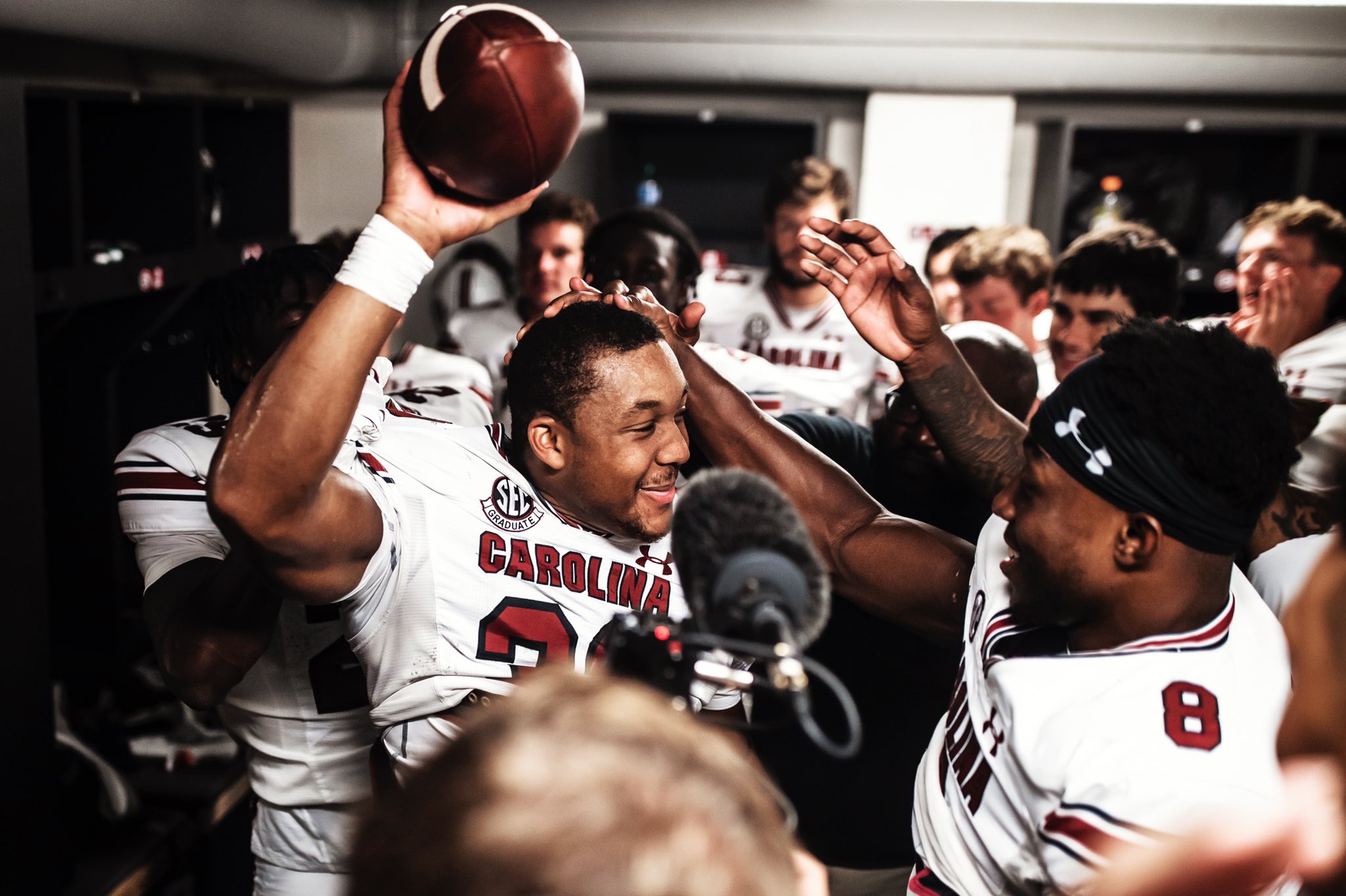 As I noted earlier this month, the University of South Carolina football team was on upset alert last weekend in Greenville, North Carolina. And for awhile, upstart East Carolina appeared well on its way to capturing the program’s first win over a Southeastern Conference (SEC) school since 1999 – when the Pirates defeated the Gamecocks at Williams-Brice stadium during former head coach Lou Holtz’s first season in Columbia, S.C.

Such a defeat on Saturday would have been disastrous for the South Carolina program … which odds makers have projected will win only four games this fall (and which has posted a 6-16 record over the past two seasons).

And yes, this was one of those projected wins.

From the get-go, though, things got dicey for first-year Gamecock head coach Shane Beamer. East Carolina connected for a trick-play touchdown on its first offensive snap – with sophomore wideout Tyler Snead drifting in the Pirate backfield on a fake toss sweep before heaving a pinpoint 75-yard bomb to sophomore receiver Jsi Hatfield.

The quick strike stunned South Carolina fans, and the Pirates took a 14-0 lead late in the second quarter when junior quarterback Holton Ahlers (above) found pay dirt following one of three Gamecock turnovers.

After a trio of subsequent drives netted South Carolina an embarrassing minus 2 yards, Ahlers converted a key third down play with a 34-yard run – setting the Pirates up with a first down at the Gamecock 37-yard line with just over a minute left to play in the first half. At this point in the contest, ESPN’s Gamecast gave East Carolina an 85.4 percent chance of pulling off the upset.

And for long-suffering Gamecock fans, a debilitating early-season loss felt like an inevitability …

Fortunately for Beamer (above), his defensive unit benefited from a lucky bounce … which it turned into a potentially season-saving play. Well, season-saving for now.

With fifth-year edge rusher Aaron Sterling providing pressure on a masterfully executed inside blitz (called at the perfect time by first-year coordinator Clayton White), Ahlers rushed a short, inside throw to freshman tailback Rahjai Harris. When Harris was unable to corral the pass, the deflection fell into the waiting arms of fifth-year linebacker Damani Staley – who channeled his father (former Gamecock/ Philadelphia Eagles tailback Duce Staley) as he rumbled 63 yards for South Carolina’s first score of the game.

Despite the momentum boost heading into the locker room, South Carolina’s offense – which gained an anemic 116 yards in the first half – continued to sputter into the second stanza. Things didn’t truly get on track until late in the game when true freshman tailback JuJu McDowell of Leesburg, Georgia introduced himself to the Gamecock faithful.

The No. 4 tailback on the South Carolina depth chart, McDowell carried the ball 11 times for 71 yards – tops for both teams. The 5-foot-9, 177-pound speedster was also instrumental in setting up the Gamecocks final two scores – a pair of clutch field goals from redshirt senior Parker White.

On the game-tying drive, McDowell put South Carolina in scoring position with a 63-yard kickoff return. And on the game-winning drive – sealed by White’s right leg from 36 yards out as time expired – he amassed 45 yards on six carries.

“(He) brings a different dimension,” the Gamecock media guide says of McDowell.

The diminutive tailback certainly lived up to that billing on Saturday … although the South Carolina offense is clearly still in search of long-term answers under first year coordinator Marcus Satterfield and starting quarterback Zeb Noland. Making his second start since transitioning from the role of graduate assistant, Noland completed 13 of 24 passes for 217 yards with one touchdown and one interception against the Pirates. He was sacked three times.

When he does have time to throw, Noland appears to have zeroed in on a favorite target. Senior wide receiver Josh Vann of Tucker, Georgia caught five passes for 116 yards against the Pirates – although he did fumble one of those receptions out of the end zone, costing South Carolina a potentially game-tying touchdown.

Still, Vann is emerging as the Gamecocks’ top threat in the receiving game following Shi Smith’s move to the Carolina Panthers.

South Carolina is now 15-5 all-time against East Carolina, winning five in a row in the series over the last decade (after dropping five of seven to the Pirates during the 1990s).

Having dodged a bullet (cutlass?) against East Carolina, Beamer’s team must now prepare for SEC play – specifically a 164-mile trip to Athens, Georgia on Saturday to play the No. 2 Georgia Bulldogs (2-0, 0-0 SEC). Obviously, Gamecock fans recall their last trip “between the hedges” in Athens with fondness – as the 20-17 upset of then-No. 3 Georgia marked the high point of the otherwise forgettable (and expensive) Will Muschamp era at South Carolina.

While Beamer and his staff prepare for a Bulldog squad that held then-No. 3 Clemson to a field goal on September 4, the rookie coach did make a point of drawing Gamecock fans’ attention to South Carolina’s SEC home opener on September 25 against Kentucky.

“Can’t wait to see you back in Columbia,” Beamer tweeted. “We’ve got a big one next weekend on the road, but when we return home for our matchup against Kentucky, we need you!”

The Kentucky game is one of several “swing” games likely to determine South Carolina’s fortunes in its first season under Beamer – who on Saturday became the first Gamecock head coach in nearly forty years to begin his career with back-to-back victories. Other games which should fall into that category? Road tilts against Tennessee (October 9) and Missouri (November 13).

If South Carolina were able to find a way to win two of those three games … the program would in all likelihood go bowling for the first time since 2018. Which, given the expectations heading into 2021, would be nothing short of miraculous.

Based on what I have seen so far, it is hard to see the Gamecocks winning any of those tilts – although I suspect Beamer’s team will be favored in home games against Troy (October 2) and Vanderbilt (October 16).