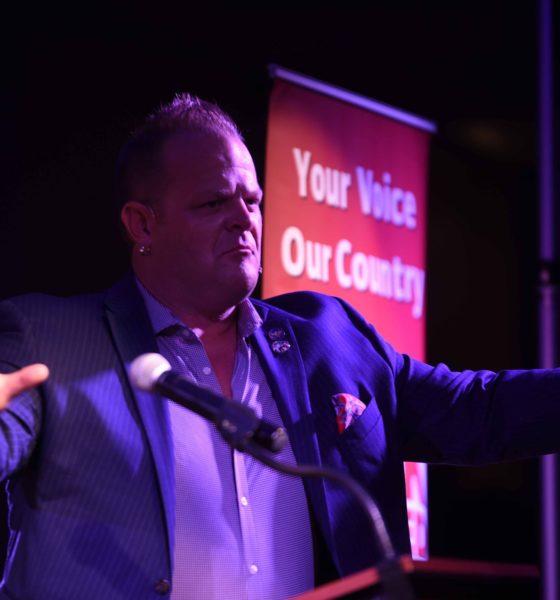 Liberal activist claims he was “lynched” by conservative “mob.”

A man who protested the appearance of retired lieutenant general Michael Flynn at a conference of right-wing activists in Greenville, South Carolina last weekend is vowing to “take legal action” against event organizers, local police and the conservative internet “shock jock” who body-slammed him to the ground at the conclusion of this gathering.

Matthew McDaniel of Clemson, S.C. – who was arrested for disorderly conduct by Greenville police in the aftermath of his demonstration at the “Rock the Red” event – is seeking online donations to support his various legal challenges.

“I was literally body slammed by people in the crowd and multiple people assaulted me even while being restrained by security,” McDaniel wrote on his GoFundMe page. “I was arrested and the people who assaulted me where not even investigated due to political bias. We are going to hold these people who assaulted me accountable including the Greenville PD and the extremist ‘Rock the Red’ organization. My lawyer is going to sue them into bankruptcy. While I was at this event I heard multiple people promoting an insurrection 2.0. These people must be stopped! Thanks for your help to save America and to hold people in power accountable!”

On his Facebook page, McDaniel wrote that Greenville police “refused to investigate my allegations of assault” even though a video of him being body-slammed by Horry county, S.C. internet “shock jock” Chad Caton was posted online.

Here is a video of the incident posted by David Hucks of MyrtleBeachSC.com …

“I had multiple visible injuries (several bruises) and property damage (my glasses were bent and my phone was cracked) and despite that the assault was captured on video, the Greenville PD refused to charge or investigate any of the people who assaulted me,” McDaniel wrote on his Facebook page.

‘Rock the Red’ bills itself as the “CPAC of the South.”

As I noted in my previous reporting on this incident, McDaniel was accosted after he began to read from a prepared statement calling Flynn a “scumbag” and a “traitor.” As the video above shows, Caton corralled and body-slammed McDaniel as

Event organizers and Caton’s allies in the Horry county Republican party defended Caton’s actions – alleging that McDaniel was armed with a weapon – purportedly a “blackjack” club.  For those of you unfamiliar with the term, a blackjack consists of a short, easily concealable leather handle with a weighted end used to deliver close-quartered blows.

They claimed McDaniel represented a threat to Flynn’s safety and that Caton’s “heroic” action protected the retired general.


“It was a blessing he was there, and any reporting to the contrary is a horrible representation of how Fake News is spread,” a statement attributed to Horry county executive committeewoman Tracey Beanz, county chairman Roger Slagle and vice chairman Jeremy Halpin noted.

McDaniel is not buying it …

“These people are in big trouble and now they are playing CYA because they know they are about to go to jail,” McDaniel wrote in an email to this news outlet early Tuesday. “I was lynched by a mob of people. I am going down today to press charges.”

McDaniel also told me he was unarmed at the time of the incident.

“There was no blackjack,” he told me. “I have never owned one and never will. The police would have found it if I had one. That is a total lie.”

As I noted yesterday, I am more than willing to give Caton the benefit of the doubt regarding this incident, but the statements offered up in his defense by event organizers and party leaders strike me as significantly overstating the “danger” posed to Flynn by this particular protester. Once again, I will wait to hear from local law enforcement regarding the matter but I continue to believe Caton could have easily neutralized this particular “threat” without having to resort to the level of force he used.

Event organizers disputed that assessment, though. Pressley Stutts – an upstate “conservative” activist who organized the gathering – accused me of “Monday morning quarterback(ing) this.”

“General Flynn, being as high profile as he is, has been the target of much vile rhetoric and many death threats,” Stutts wrote to me on Tuesday. “And when someone comes into a private event, commandeers a microphone and starts making vile and threatening remarks about the General, not knowing what type of threat he may pose, one would move to neutralize that threat IMMEDIATELY. That is what Mr. Caton did. It was a split second instinctual reaction and it was the right thing to do.”