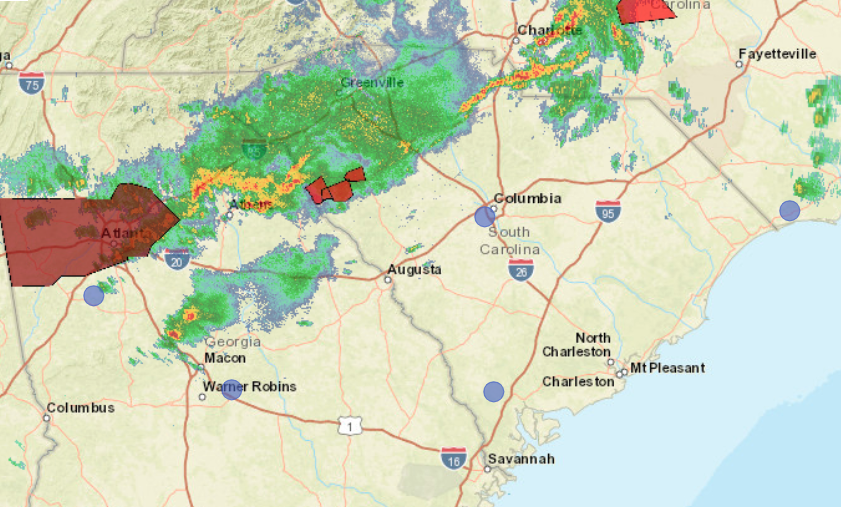 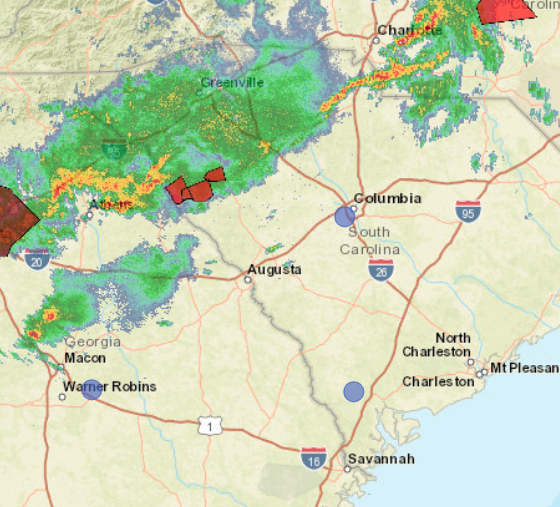 A dangerous storm system that unleashed several tornadoes in Mississippi Sunday is headed east and could bring damaging winds, large hail, and/ or tornadoes to the Upstate and Midlands Monday evening, according to South Carolina forecasters.

The National Weather Service confirmed a tornado touch down in Abbeville County, South Carolina around 2:20 p.m. A tornado warning is in effect for Lexington County until 4:15 p.m.


A tornado watch is in effect for the following South Carolina Counties until 7 p.m. this evening:

The storm system is expected to start moving into the Midlands region before 3:30 p.m., according to the National Weather Service in Columbia, SC.

Forecasters warned people in the Midlands Monday afternoon to prepare for severe weather.

“Now is the time to ensure you have multiple ways of receiving warnings as ingredients are in place for severe weather. This includes strong to severe thunderstorms and possible tornadoes,” forecasters at NWS- Columbia said.

In the Midlands, meteorologists say that damaging straight-line winds are the greatest concern for this storm, while isolated hail (up to quarter-size) and tornadoes are possible this evening. The system could produce wind gusts up to 70 mph.

On Monday, the dangerous line of storms caused thousands of power outages in the Atlanta region, the Weather channel reported.

The system is supposed to weaken as it moves into South Carolina, but is still considered a threat, according to AccuWeather.

“That feature will weaken while moving northeastward but will still have enough punch to produce areas of rain and thunder as it pivots into the East,” AccuWeather Meteorologist Nicole LoBiondo said.

The storm system should head offshore by this evening, but the threat of severe weather won’t be over for several days.

There is a chance of scattered showers and thunderstorms around Columbia, SC on Tuesday and Wednesday, according to the NWS.

Here are the latest forecasts/ severe weather briefings for South Carolina this week..