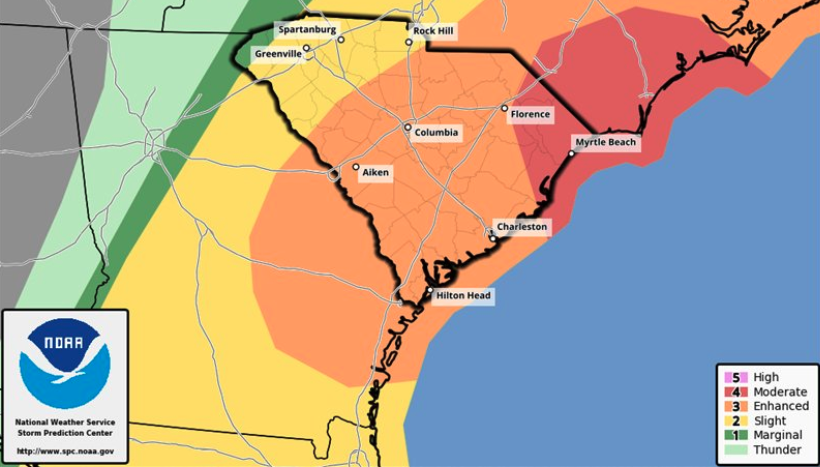 A dangerous wave of storms moving into South Carolina today is likely to unleash damaging winds, large hail, and/ or tornadoes across the central and eastern parts of the state this afternoon, according to meteorologists at the National Weather Service (NWS).

The band of storms is moving east this afternoon, meteorologists at the NWS- Columbia said. Forecasters are eyeing two main areas of concern.

A tornado watch is in effect until 6 p.m. for the following South Carolina counties:

The system, colliding with a cold front, is expected to gain strength as it moves east across the state and weather conditions worsen. Early Thursday afternoon, the storm track shifted slightly east.

“The area along and east of the I-20 corridor is most favored for
the highest impacts including possible strong tornadoes,” meteorologists at the National Weather Service in Columbia said.

In the Columbia, South Carolina area, watches will likely be issued around noon.

In the Lowcountry, the worst threat will be between 2 and 5 p.m. for Jasper, Beaufort, and Colleton County, and between 3 and 6 p.m. in Charleston County, according to the NWS.

The storms are expected to last 1-2 hours once they hit, NWS- Charleston forecasters said Thursday morning.

Because the storm is moving quickly, flooding is not a concern with this storm.

The NWS Storm Prediction Center scaled back on its alerts for most of South Carolina and shifted the “moderate risk” zone for the Myrtle Beach area.

The “moderate risk” zone is the second highest alert for severe weather and is rarely issued by the NWS.

However, the “enhanced risk” alert still means that numerous, severe storms are possible and capable of producing serious wind damage, 1-2 inch hail, and a few tornadoes.

In other words, the shift in the forecast doesn’t mean that the Lowcountry and Midlands are out of the woods by any means.

While all severe weather threats are on the table for this storm, forecasters are most concerned about tropical-storm-level winds today (gusts up to 60 mph).


Power outages, downed trees, and structural damage are all possible in the Midlands, Lowcountry, and Pee Dee areas.

The storm has the capability of producing EF-2 or greater tornadoes, so most of the state should be on high alert today.

“Make sure you have a plan in place, a safe place for shelter and multiple ways to reliably receive warnings,” NWS forecasters said on Tuesday.

The storms are expected to clear by Thursday evening.


Stay tuned… We will continue to update this story throughout the day if the forecast changes.