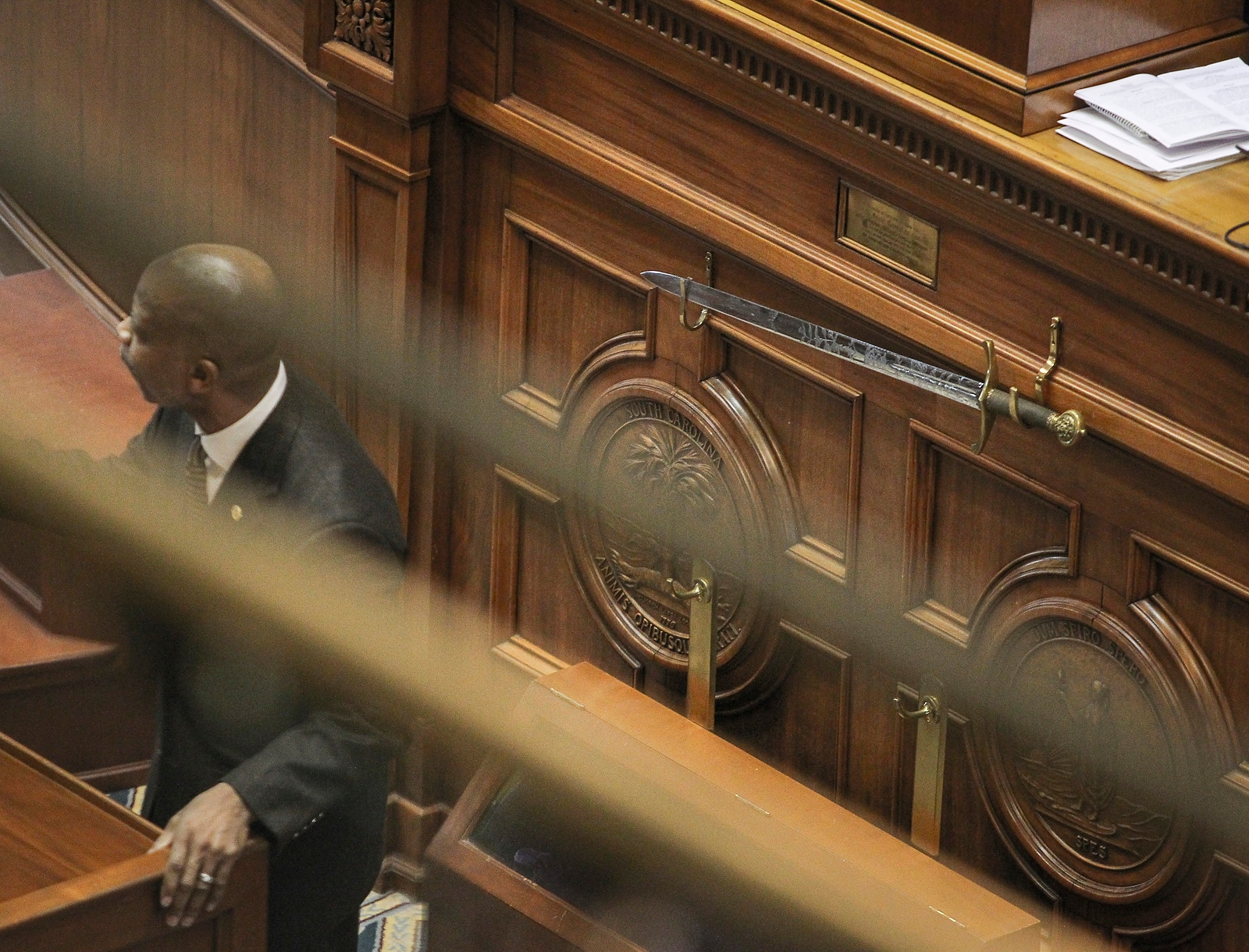 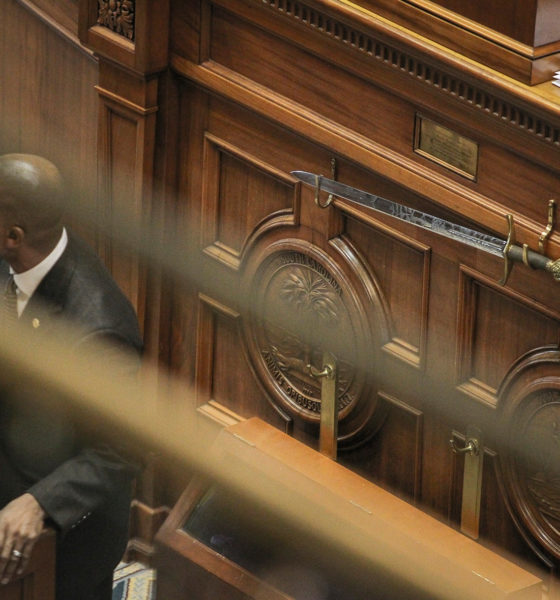 Earlier this month, members of the South Carolina Senate marched across the upper lobby of the State House to participate in a special joint legislative session with their colleagues in the S.C. House of Representatives. Preceding them into the chamber – as is customary on such occasions – was the official “Sword of State,” held by the sergeant-at-arms of the Senate.

The symbol of the upper chamber of the legislature, this ornate blade is often referred to as the “Sword of the Senate.” But technically, it belongs to all South Carolinians.

During the 2019 inaugural ceremony, the same sword preceded state senators as they marched down the south steps of the State House to watch Henry McMaster be sworn in to his first full, four-year term as governor.

Of course, few non-historians are aware that the sword of state we see on television – the sword that has been in use for the past seventy years – is not the original sword of South Carolina.

Nor, for that matter, is the sword which preceded it.

That’s right: The original sword of state vanished without a trace more than eighty years ago – and has not been seen since. Its whereabouts – and the untold tale of who took it (and what they may have done with it) – have become a veritable Sherlock Holmes’ whodunit.

With each passing year, the prospect of recovering the weapon intact diminishes … assuming it even still exists. Those who absconded with it – or have knowledge of the circumstances surrounding its theft – have either shuffled off this mortal coil or are likely approaching the end of their lives.


Which means the artifact could soon be lost to history …

While an initial inquiry into the missing sword was undertaken by the city of Columbia, S.C. police department – no records remain related to that investigation. At the federal level, the sword continues to be featured in the Federal Bureau of Investigation (FBI)’s national stolen art file, a listing of “paintings, statuary and other forms of fine art” which remain unaccounted for.

Federal officials indicated this month that the case of the stolen South Carolina sword remained open – directing anyone with information on its theft to reach out via the FBI.gov tip line.

ORIGINS OF A MYSTERY …

How did South Carolina’s sword of state come to such an unfortunate and unresolved fate? According to the S.C. Legislative Manual, this distinctive silver and steel weapon – believed to have been crafted in the Palmetto Lowcountry in the late seventeenth century – “disappeared from the Senate rostrum in 1941.” More precisely, the disappearance occurred in February 1941 – or at least that’s when former Senate sergeant-at-arms Zed Hope noticed its absence prior to the convening of a joint session of the S.C. General Assembly.

Eight decades later, the whereabouts of the blade are still unknown … as are the circumstances surrounding its vanishing act.

Was it sold into a (very) private collection? Was it melted down for its precious silver? Was it inadvertently misplaced by the thieves? Is it being used by a secret society as part of a clandestine initiation ritual?

The sword could literally be anywhere, with anyone … again, assuming it even still exists.

At the time of its disappearance, few were concerned about the theft – believing someone had merely played a prank on Hope, according to an interview given by S.C. House clerk Charles Reid to reporter Jeffrey Collins of The Associated Press in December 2013.

Adding to the intrigue? There is only one known photograph of the sword, a blurry, low resolution exposure which was lifted from a newspaper article in the 1930s. The image offers very little in the way of identifiable information about the intricacies of the sword.

(Via: Federal Bureau of Investigation)

The serpentine-shaped, double-edged blade – or “flamberge” (a.k.a. flame blade”) – is made of steel. It measures an estimated 42 inches and includes eleven distinct undulations. The silver hilt – which features opposing, curved quillons – measures eight inches and is made of pure silver, including its decorative, rounded pommel and tang.

From the tip of its steel point to the protruding nub of its silver “tang nut” – which holds the pommel and hilt in place – the weapon measures approximately fifty inches.

According to the late Alexander Samuel Salley – who spent 45 years as South Carolina’s resident historian prior to his retirement in 1949 – the sword is the handiwork of an unknown Lowcountry silversmith.

“That this Sword of State was made in Charles Town (now Charleston) by a local silversmith is evidenced by the fact that it contains no hallmarks, which would not be the case had it been made in England,” Salley opined, according to notes contained in the legislative manual.

Others dispute Salley’s contention, believing the craftsmanship of the weapon is far too complex to have originated in a colonial silversmith’s shop.

Prior to its theft, the sword bore witness to more than 237 years of colonial, Confederate and American history – dating all the way back to its use in the Commons House of Assembly, which was first established in 1670. This was the first popularly elected branch of government in what was then the colony of South Carolina.

On May 5, 1704, the sword was adopted by the grand council of the Lords Proprietors of Carolina for use by “the right honorable governor and all succeeding governors.” A total of 26 pounds, eleven shillings and three pence was appropriated for the blade – or a little more than $8,000 in today’s “coin of the realm.”

Within fifteen years, though, the Lords Proprietors were overthrown and replaced by His Majesty’s Council for South Carolina. Shortly thereafter, in June of 1722, the president of the new royal colonial government informed its members that the sword was in “no way proper to be used by any of His Majesty’s governor(s).”

Accordingly, it was pawned off on the mayor of Charles Town for his use – the first of many indignities which would befall the blade prior to its disappearance more than two centuries later.

In 1776 – when South Carolina adopted its first state constitution independent of Great Britain – the sword found its way back into the limelight. That March, it was carried by the local sheriff through the streets of Charleston in the inaugural procession of John Rutledge, who served as president of South Carolina during the American Revolution and later as the first governor of the newly-formed state of South Carolina.

Rutledge went on to become one of the inaugural justices of the U.S. supreme court (and its second chief justice).

“The same sword of state has been in constant use ever since, being borne by the sergeant-at-arms of the Senate instead of the sheriff of Charleston district (now county),” Salley wrote in his notes for the Senate.

Near the end of the War Between the States, the sword was stolen during the U.S. Army of Tennessee’s brutal “Campaign of the Carolinas” – a savage, scorched earth march from Savannah, Georgia to Bentonville, N.C. led by U.S. general William Tecumseh Sherman. Part of Sherman’s “total war” on the civilian population of the south, the Carolinas campaign included the destruction of Columbia, S.C. in mid-February 1865 – at which time the sword was seized as a trophée de la guerre.

The blade was lost by the looters, though, and presumed to have been lost to history … but it turned up miraculously in a museum in Philadelphia, Pennsylvania in the late nineteenth century. And was returned to its rightful place in the S.C. Senate shortly thereafter.

There it remained more than a half-century … until its disappearance in 1941.

In the immediate aftermath of the theft, the S.C. Senate made use of a cavalry saber from the Charleston Museum as a replacement. Crafted in or around 1800, this sword saw action in both the War of 1812 and the War Between the States. According to the journal of the Senate on March 5, 1941, the cavalry saber was provided “to replace the Sword of State recently stolen from the chamber.”

A decade later, on February 20, 1951, Edward Wood – the first earl of Halifax and Great Britain’s ambassador to the United States – presented a new sword of state to lawmakers as a personal gift. Halifax had heard of the theft of the original sword during a 1944 visit to the Palmetto State and wanted to provide a “British blade” as its replacement. This 39-inch sword rests where its predecessors did – on a rack in front of the S.C. Senate rostrum whenever the chamber is in session.

As mentioned earlier, the sword is also carried by the Senate sergeant-at-arms during joint legislative sessions or other ceremonial events at which the upper chamber of the legislature is invited to participate.

Upon receipt of Lord Halifax’s gift, the cavalry sword was returned to the Charleston Museum – where it remains on display.

“The (Halifax) sword was fashioned by master craftsmen of London, England, having a pointed straight blade, the upper portion of which is etched with a design containing the state flower, the yellow jessamine,” according to the legislative manual. “One side of the design is centered with the State Seal. It has a golden curved guard and a handle wrapped with gold braid.”

The sword – manufactured by Wilkinson Sword, Ltd – features a pommel adorned with rosettes and a scabbard covered in burgundy leather with brass fittings. This is the sword that has been in continuous use in the S.C. Senate for the last seventy years.

More than a quarter century after the 1941 theft, officials tasked with organizing the tricentennial celebration of the first permanent settlement in South Carolina began searching in earnest for the missing blade. In 1968, an invitation was extended to those responsible for its theft (or those who may have come into possession of it): Return the sword and no questions would be asked.

It is not clear whether this “no questions asked” policy remains the view of the state regarding the voluntary surrender of the sword, but it is indeed the policy of a Midlands man who is leading a renewed push to recover the missing artifact.

Julian Wilson – a Columbia, S.C. businessman – is the brother of S.C. attorney general Alan Wilson and the son of U.S. congressman Joe Wilson. One of the owners of Palmetto State Armory, Wilson has taken a personal interest in securing the safe return of the sword. He is also willing to make a sizable personal investment in order to ensure its safe passage back to its rightful owner – the people of the Palmetto State.

“I want to do this now as it’s been eighty years and the responsible party is no longer likely with us,” Wilson told us. “With each passing day those who might have been told its location are being lost to time. It’s a modern day treasure hunt.”

In an effort to facilitate the process, Wilson has set up an email address at Palmetto Armory dedicated to receiving tips regarding the possible whereabouts of the sword (you can access that email by clicking here).

“The only thing I want out of this is to put the sword of the Lord Proprietors back into the hands of the state of South Carolina,” Wilson told us. “Pretty much every leader in the history of (our state) up to Strom Thurmond got to hold it or see it and say, ‘neat sword.'”

Let’s hope future state leaders will have the same opportunity …