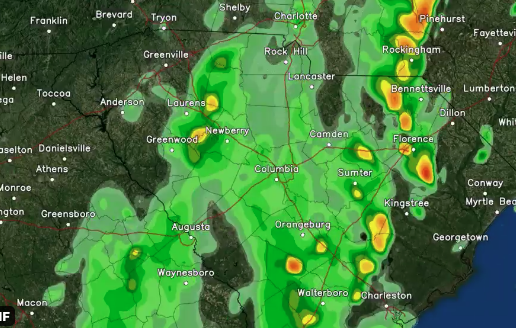 Severe T-storms, Tornado Possible In The Midlands And Lowcountry Today

Ahead of a cold front sweeping across the Palmetto State, there is a risk for strong thunderstorms across the Midlands and Lowcountry Tuesday according to the latest National Weather Service forecast.

“The main threat will be strong damaging wind gusts. However, an isolated tornado cannot be ruled out, especially across the eastern Carolinas,” officials at the the National Weather Service – Columbia said in its briefing.

In the Lowcountry, the risk for damaging winds and a possible tornado will be highest east of I-95 including the Savannah, Georgia and Charleston metro areas, according to the National Weather Service –Charleston.

Storms are expected to start sprouting up in the Midlands and Lowcountry around 2 p.m. this afternoon.

In the Lowcountry, heavy rainfall is possible between 2 p.m. and 8 p.m. while high tide at Charleston Harbor is at 7:25 p.m.

Flooding is possible too, especially in Charleston with high tide.

“The combination of heavy rainfall and already elevated high tides could produce pockets of moderate flooding across Downtown Charleston, especially in the usual flood areas. Urban flooding in the normal areas of the Savannah Metro Area could also occur,” according to the National Weather Service, Charleston.

The Lowcountry should get less than an inch of rain, while 1-3 inches of rain are expected across the Midlands, according to the National Weather Service.

Columbia, SC should be getting around 1.5- 2 inches of rain later today.

After the showers and thunderstorms today, cooler temps and calmer weather moves in!

Here is the 7-day forecast from the National Weather Service for Columbia, SC (highs in the 70s, mostly). It’s looking like beautiful fall weather ahead!

Oh, and the Atlantic is looking calm for the first part of October (fingers crossed).