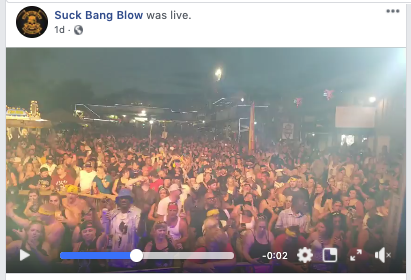 Following yet another week of surging coronavirus case numbers, South Carolina senator Dick Harpootlian urged Gov. Henry McMaster to do more to stop the spread of COVID-19 by punishing businesses not following the rules.

In a letter sent Monday, Harpootlian told McMaster that the South Carolina Department of Health and Environmental Control (SCDHEC) had the right to step in and use their powers to control the situation if he wouldn’t do it himself, the Post and Courier first reported.

Harpootlian raised particular concern about a Myrtle Beach Bike Week event at a venue called Suck Bang Blow where hundreds of people packed closely together at a concert, according to photos circulating on social media.

“After extensive discussions with DHEC, I am imploring them to exercise their powers under the Emergency Health Powers Act (EHPA),” the Democratic senator tweeted. Under the EHPA, Harpootlian said SCDHEC would have the power to shutter businesses like Suck Bang Blow that are allowing people to gather by the masses.

Harpootlian explained in the letter that South Carolina faces two “horrible” options — a statewide shutdown or a “humanitarian crisis of uncontrollable deaths and incapacitated hospitals and medical providers.”

“At this time, South Carolina is not safe,” Harpootlian wrote. “If you want to protect the economy and educate children, we must do a better job fighting the virus.”


Harpootlian said he’s been in talks with SCDHEC officials and urged them to use their powers to “first warn and then close irresponsible businesses” as a way to stop community spread of COVID-19.

Harpootlian wrote that McMaster’s administration “fails to see the benefit of the threat of enforcement.”

“The problem is only going to get worse,” Harpootlian said. “Consider the photos circulating on social media from a concert Saturday night in Georgetown County at a venue called Suck Bang Blow.”

“If there were 300 people in attendance (for example) our 20 percent positive statewide average on COVID-19 testing suggests approximately 50 of those in attendance were carrying the virus,” Harpootlian said.”Those they had contact with went home, perhaps to the next town over, with a chance of spreading it to family, friends and coworkers. “

Harpootlian called the concert “reckless” and said allowing it was a “failure of government” and a “super-spreader” event.

“We are running out of time,” he concluded the letter. “I implore you to lead South Carolina by protecting its people, economy, and schools by using the powers of your office and directing the state’s departments to affimately act by warning and then closing businesses that refuse to comply with public health guidances. I stand ready to resist.”

McMaster has received increasing backlash and resistance throughout the COVID-19 pandemic. Even after South Carolina climbed to the  No. 3 worst hotspot in the world for COVID-19, McMaster has done very little to attempt to stop the spread of the virus. On July 10, McMaster issued a “last call” order which prohibits alcohol sales after 11 p.m. at bars and restaurants, but it does not apply to grocery stores and other retailers.

Deaths have increased in recent weeks as well. In July, South Carolina has averaged 21 deaths per day, which is up from eight deaths per day in May and June.