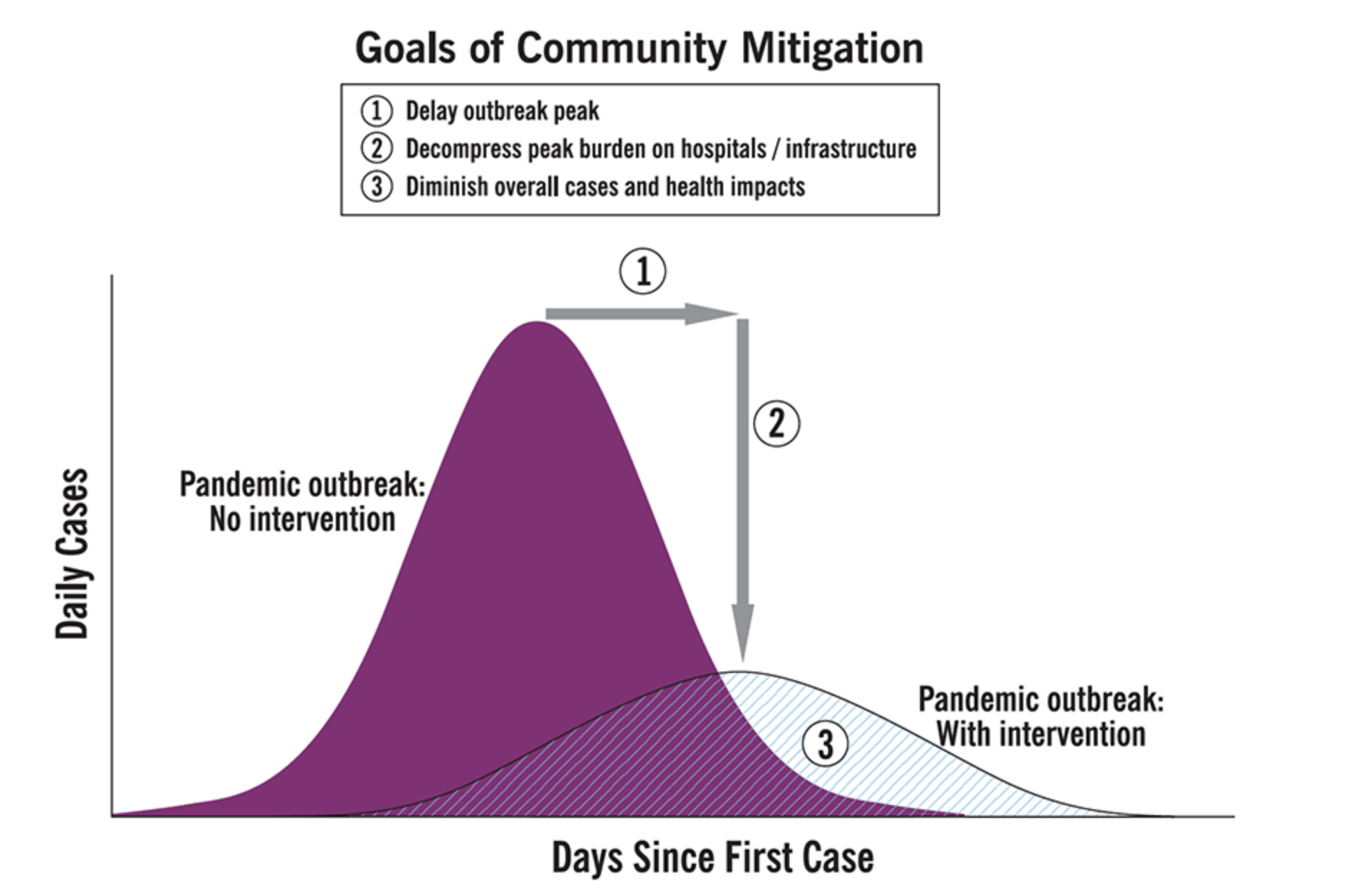 While South Carolina leaders have taken big steps to “flatten the curve” of  coronavirus (known officially as 2019-nCoV or COVID-19) by closing down schools, cancelling events, and restricting restaurant services — now is the time for everyone to take social distancing seriously, according to Medical University of South Carolina (MUSC) immunologist Michael Schmidt.

In a MUSC news release, Schmidt further explained the concept of social distancing and why it’s so important right now.

“I think social distancing is the only thing that is going to immediately address the situation that we’re experiencing here in the United States,” he said. “Please help us flatten the curve. No play dates for your children, because you don’t know what the other child has been exposed to and might be bringing into your house, where it could be passed on to you or the child’s grandparent.”

When people say “flatten the curve” they are talking about the graphic (pictured above) that shows what can happen to a healthcare system if all the coronavirus cases hit at one time, like they did in Italy where nearly 3,400 people have died from COVID-19.

“The scary statistic is, per capita, Italy has a greater number of physicians than the United States and more importantly, a greater number of hospital beds per capita than the United States. Yet we are witnessing bedlam in Italy simply because they all got it at once,” Schmidt said. “By contrast, in China, social distancing did flatten the curve.”

To prevent that from happening, officials and experts are urging Americans to practice social distancing for the time being.

Schmidt said in the release he’s “encouraged” by some of the measures taken by South Carolina leadership.

Gov. Henry McMaster and DHEC broadly shifted their message about social distancing from Friday to Sunday. On Friday, SCDHEC was still encouraging South Carolinians “to maintain their daily routines of protecting against illness by practicing good hygiene,” and only discouraged those experiencing symptoms from attending events.

By Sunday — when they announced that the amount of cases doubled over the weekend — officials changed their tone and said that schools would be closed through the end of March and events over 50 people were banned.

“This may sound harsh, but people can no longer just think about their own comfort and pleasure. We really have to take others into consideration.” Schmidt said. “It’s not too late to flatten the curve.”

Health experts across the United States are worried about the influx of COVID-19 cases overwhelming the hospitals in the next few weeks. A review of South Carolina’s hospital system – including eight counties without large healthcare facilities —shows what would happen if the disease climbs at continuing rates.

According to its latest report issued earlier this month, SCDHEC reported 9,945 staffed general hospital beds for a population of 5,084,127 people in South Carolina.

According to the CDC, about 68 percent of the beds are occupied at any given time.

In South Carolina, we also have to consider that about a fifth of South Carolina’s population — or 1.1. million people — are over the age of 65. The elderly are the most at-risk group for coronavirus. Morality rates climb with each age group (however, new CDC stats show that COVID-19 is hitting millennials harder than it did in China with about 1/5 of infected people between 20 and 44 requiring hospitalization for treatment).

And in South Carolina, we have several hospital desert areas that don’t have ICUS or even a hospital. According to DHEC, the following counties are without hospitals:

The South Carolina Hospital Association told FITSNews there is no public data on the number of ICU beds across the state because they fluctuate often.

On the bright side, hospitals across South Carolina appear to be doing everything they can to prepare for the pandemic. Prisma Health and MUSC have both set up drive-through clinics for collecting samplings for testing after patients are first screened by doctors using free virtual visits.

“We’re prepared,” William Owens, MD, Director of Medical Intensive Care and a critical care physician at Prisma Health Richland Hospital said. “I would say we are ahead of the game as far as what we’re ready to do. We’re keeping track with what’s going on and monitoring  and the number of patients who are being diagnosed.”

Owens also wrote The Ventilator Book, which is currently a best-seller on Amazon.

“Theoretically you could use one ventilator for two patients, but it would require some creative work to hook it up,” he said. “Generally, one ventilator for one patient. One doctor can see numerous patients, though. I may see 10-15 ventilated patients in a regular day.”

He said Prisma Health Richland Hospital has around 140 ventilators capable of treating adult and pediatric patients in its Columbia hospitals. He said the health care system in South Carolina is ready to mobilize ventilators between hospitals and regions if needed.

At his hospital, Owens is confident in the number of ventilators, even if the outbreak strikes on the higher end.  The latest CDC data shows that so far in the U.S., between 4.9 and 11.5 percent of COVID-19 patients were admitted to the ICU.

“We have a large fleet of ventilators in case we see a large proportion of patients who are requiring critical care,” Owens said. “And if people follow the advice that they’ve been given on washing their hands and practicing social distancing — that’s gonna slow transmission.”

Hospitals across South Carolina have restricted visitors and entrances to contain the spread of the virus.

On Tuesday, Gov. Henry McMaster also took action to help hospitals dealing with the anticipated overload of COVID-19 patients. He required the National Guard to begin planning with hospitals to build mobile facilities.

As a part of his executive order, McMaster also allowed hospitals to use medical and nursing school students as COVID-19 cases increase.

He requested that South Carolina medical and surgical centers stop all elective and non-threatening surgical and medical procedures to free up medical equipment and staff.

In South Carolina, there have been 60 cases with one fatality, according to the latest statistics provided by government health officials.