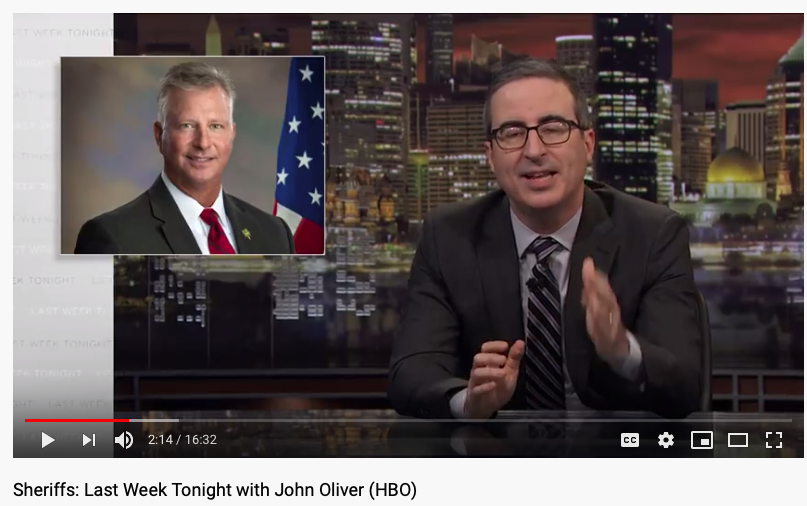 Sheriffs across the county are operating with a tremendous amount of power and little accountability, and something must be done about it, John Oliver stressed on Last Week Tonight.

In his main segment urging the importance of sheriff elections, Oliver featured some particularly noteworthy sheriffs who have used their power to live above the law. Former Florence County, South Carolina sheriff Kenney Boone — currently in jail — was one of those sheriffs mentioned on the HBO broadcast.

“Depending on where you live, your sheriff could be good, bad, or a total weirdo,” Oliver said in the segment that aired Sunday evening. “And I won’t say which ones are the weirdos because that would be unfair to Kenney Boone.”

Oliver then showed Boone’s “magnificently weird” 2008 anti-drug campaign ad featuring a little boy who apparently died after taking one hit of some kind of drug.

“They said one hit wouldn’t wouldn’t hurt,” the kid in the Boone campaign commercial said.

The commercial then cuts to a shot of the kid dying in the hospital.

“They lied,” Boone, standing in a cemetery, said on the commercial. “I’m Sheriff Kenney Boone. Please, please talk to your kids about drugs.”

Boone then pauses, and looks to his left at the funeral procession.

Then he says it slower.

“Talk. To. Your. Kids. About. Drugs,” Boone says, ending the commercial.

Oliver showed Colleton County sheriff candidate Craig Sitvender’s 2019 “unforgettable” campaign ad where he released a photo of himself wearing blackface at a Halloween party in an attempt to appear transparent.

“That was a different time,” Stivender said in the commercial.

“Wow…” Oliver said reacting to the ad. “For the record, that different time he’s talking about was 2009 when blackface was widely considered, and this is true, bad.”

South Carolina sheriffs weren’t the only ones in the shame spotlight last night. Oliver also mentioned an Ohio sheriff who refused to let his deputies use life-saving Narcan medication on people who overdose and a California sheriff who appeared the opposite of concerned about reports of horrific jail conditions.

“We have a position with a tremendous amount of authority with low accountability which is always an inevitable recipe for disaster,” Oliver said.

Boone was the only sheriff mentioned more than once in the segment.

“Sheriffs operate with a lot of impunity and they can get pretty belligerent if anyone questions them,” John Oliver said. “Remember Kenney Boone?”

Oliver then played a clip of Boone’s notorious voicemails he left for a former Florence County official who questioned his spending in 2018.

“Now all of a sudden you want to question things that I do?” Boone yelled in the voicemail.  “You little nerdy, uh, intelligent bastard.”

Boone’s attorney “disputed the authenticity of that voicemail,” John Oliver said on the show.

“You know, the one where he says he’s Kenney Boone while sounding exactly like Kenney Boone,” Oliver joked.

Oliver then said he would love to speak with Boone himself on this matter, but couldn’t “because he’s in jail.”

In case you missed it, Boone has had a particularly bad year. Last week, he was thrown back in jail for probation violation stemming from a February incident where he allegedly kicked a cat while arguing with his wife. This arrest came just weeks after Boone pleaded guilty to one count of felony embezzlement and one count of common law misconduct in office.

“Which reminds me, talk to your kids about felony embezzlement,” Oliver joked.

Boone is set to appear in court at 9:30 a.m on Thursday. He could be released from jail then.