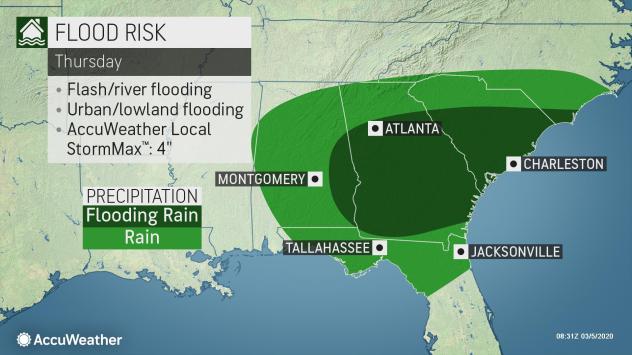 After some areas of the state have endured the wettest winter on record, South Carolina can expect some minor to moderate flooding, as more rainfall saturates the Palmetto State Thursday, Hope Mizzell, the State Climatologist for the South Carolina Department of Natural Resources, told FITSNews.

Across South Carolina, the Midlands appears to be getting the brunt of the rainfall and flooding as the slow moving storm system makes its way across the southeast Thursday.

The Columbia, South Carolina area can expect to see another 1.25 to 2 inches of rain throughout Thursday, according to the National Weather Service. In the last three days, Aiken has seen the most rainfall in the state at 3.03 inches.

Forecasters are predicting minor to moderate flooding “primarily from the midlands to the coast,” today, Mizzell said.

The National Weather Service in Columbia issued a flood warning for the following rivers in South Carolina:

“Runoff from continuing rainfall combined with hydroelectric power generation and dam releases continues to produce flooding along portions of the North Fork of the Edisto and Congaree River, the National Weather Service said in its Thursday morning update.

These rivers – already high to begin with – are expected to rise throughout the day Thursday.

The problem is that this slow-moving storm system dumping rain on state that is already soaked.

“Two- thirds of the state has experienced 200 percent of rainfall (compared to normal) over the last 30 days,” Mizzell said.

The Columbia airport hit an all-time record for total rainfall from December through February at 20.63 inches, nearly double what it normally sees at 11.06 inches of precipitation.

Mizzell said other areas recording rainfall including Pikens, Saluda, and Laurens have broken records for the wettest winter this year.

Jocassee recorded the highest amount of precipitation this winter at a whopping 36 inches in three months, which isn’t even a record for them.

After this exceptionally wet winter, is there any hope for relief in sight?

“The medium range outlook for the next six to ten days (across South Carolina) is calling for above-normal temps and above normal precipitation,” Mizzell said.

However, conditions should lighten up this weekend after the storm system leaves the Atlantic coast by Thursday evening, according to AccuWeather.

“An expansive area of high pressure will likely keep much of the region dry through the weekend,” AccuWeather reported.

Gov. Henry McMaster proclaimed this week as South Carolina Citizen Weather Observer Week, honoring the people who volunteer to collect data for the National Weather Service. For more information on how to join, click here.

A Great Day In South Carolina?