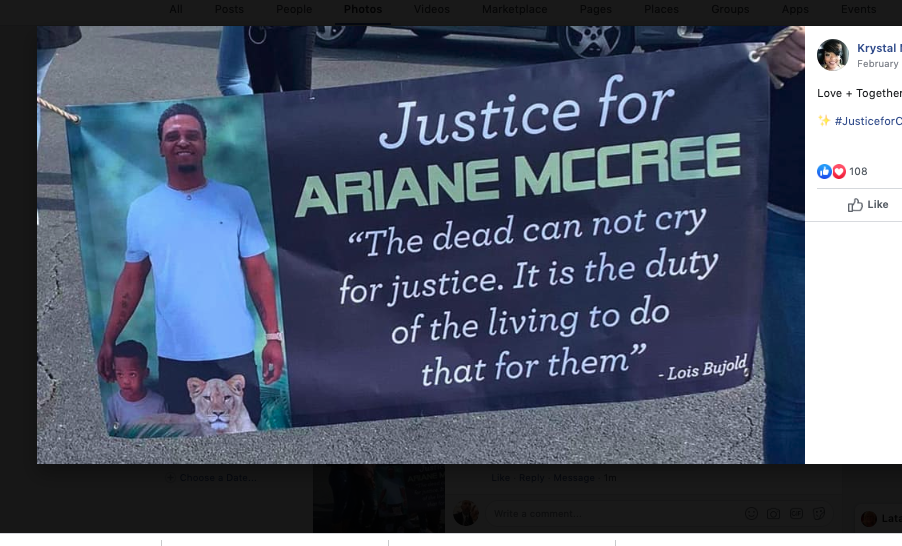 Three months after a black man described as a loving father and former athlete was killed by a Chester, South Carolina Police officer in a Walmart parking lot, his family’s lawsuit has been moved to federal court.

The family of Ariane McCree, 28, filed a lawsuit last month against the Chester Police Department, City of Chester, Walmart, and three unnamed officers. On Feb. 27, case was moved from state court in Chester County to federal court because the lawsuit alleges McCree’s constitutional rights were violated, according to court documents.

McCree was killed by police after he was detained for allegedly shoplifting at Walmart on Nov. 23. Chester Police officials have said that McCree assaulted an officer before he was shot and killed, but the lawsuit tells a different story.

So many questions surrounding this case asking what exactly happened in the last few moments of McCree’s life could likely be answered by surveillance video that hasn’t yet been released to the public or to the family.

Almost a month after McCree’s attorney subpoenaed Walmart for the video footage from Nov. 23, Walmart attorneys filed a motion asking the court to limit the timeframe of the video to only the hours McCree and law enforcement officials were on scene. They also requested that the court order the video footage to be confidential and only limited to those involved in the litigation. They also asked to schedule a hearing about the video release.

On the day the lawsuit was filed in civil court last month, McCree’s supporters held a “March for Justice” where his family stressed that they needed to see the videos to find out exactly what happened.

“Show us the video,” Ariane’s father Michael McCree said, as reported in the Rock Hill Herald. “Just saying my son was shoplifting is not enough.”

Ariane was “well-known and well-regarded in Chester as a talented athlete who had played NCAA Division I football at Jackson State University.” He was also a “loving father of his 3-year-old boy,” the lawsuit stated.

McCree went to Walmart in Chester to buy a lock on Nov. 23, 2019. According to the lawsuit, he brought the lock to the check-out where a cashier placed it in a bag.

After leaving the store, McCree turned around when he realized the cashier didn’t charge him for the lock, according to the lawsuit.

When he was re-entering the store, a Chester Police Department officer working security at Walmart confronted McCree and detained him in a room at the store, the lawsuit said.

Inside the room, an officer searched McCree for weapons, handcuffed him, and started threatening him, according to the lawsuit.

At this point, McCree had not been accused of a crime and was trying to tell the officer what happened with the lock, according to the lawsuit.

As the situation grew more intense with “increasing threats” from the officers, McCree began fearing for his life, the lawsuit said.

At some point while he was detained, Chester Police said McCree assaulted an officer, multiple media outlets reported. This is not mentioned in the lawsuit.

“Ariane knew Walmart and (the Chester police officer) had no legal basis to detain him in the room let alone place him in handcuffs, but he also recognized that as a young African-American man he stood little chance of emerging from the situation unharmed—physically or legally,” the lawsuit claimed.

With this in mind, McCree ran away from the officers, still handcuffed, out of the room and into the crowded Walmart parking lot, the lawsuit said.

Then, three officers “each acting on behalf of Walmart” fired their weapons in the parking lot toward McCree, the lawsuit said. Chester police later said that McCree presented a weapon at the time.

“He suffered gunshot wounds to his hip, arm, and chest and ultimately collapsed on the pavement,” the lawsuit said. One car had eight bullet marks from all the gunfire.

According to lawsuit he was in handcuffs until one of the paramedics on scene demanded they be removed, according to the lawsuit.

He died at the local hospital – just an hour after he first arrived at Walmart, the lawsuit said.

The family is suing Chester Police Department and the individual officers for gross negligence, negligent hiring, use of force, unlawful seizure, and several other allegations in the case. Walmart is being sued for violating McCree’s Fourth Amendment rights and survival action.

The lawsuit accuses Walmart of using the sheriff’s office for “tax-payer-paid security.”

Mullins McLeod and Colin Ram of the Charleston-based McLeod Law Group are representing the family in the suit.

Tommy Crosby, spokesperson for the the South Carolina Law Enforcement Division (SLED), told FITSNews Tuesday their investigation is still ongoing. He said they won’t release any further information on the case until it’s closed. No charges have been filed.