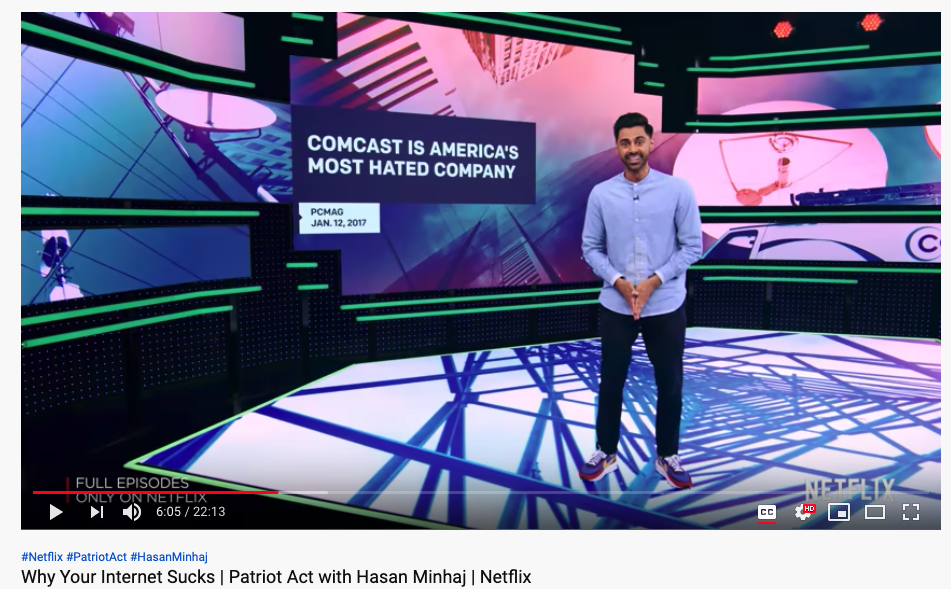 Inspired by a show he saw on Netflix, a South Carolina lawmaker has introduced legislation that aims to “open up broadband internet competition across the state” and improve internet access in rural communities.

This week, state representative Justin Bamberg filed a bill that will allow local governments to actually do something about slow internet speeds in their communities — instead of relying on giant corporations that have traditionally overlooked many areas of South Carolina.

“The bill allows local governments to create their own internet service provider, whether it’s on their own or through a joint venture,” Bamberg said.

The legislation would give municipalities options when it comes to broadband service providers. They could chose to build their own infrastructure and run the company themselves or contract with a provider, instead of relying on monopolies that are providing slow service.

Bamberg got the idea after watching an episode of the Patriot Act with Hasan Minhaj called “Why Your Internet Sucks.”

In the episode, Minhaj explains how media giants like Comcast have created internet inequality in rural communities across the United States by failing to provide quality service.

‘Cut off from the world’

Bamberg said in places like where he lives in Bamberg County, people are sick of the empty promises from internet providers.

“In rural South Carolina, we are cut off from the world — inside and outside our homes,” Bamberg said. “In a lot of these places, you don’t even have cell service.”

“Most people in populated parts of South Carolina have no idea what the hell one 1x is,” he said.

For those of you who don’t know, 1x is the symbol shown on your phone when you don’t have any cell phone service.

“Well, if you live in rural South Carolina, you know exactly what that is,” Bamberg told FITSNews. “1x means you can’t make or receive calls. And your girlfriend is gonna get mad at you because you ain’t responding to her.”

“Your ability to have a basic necessity in 2020 like internet shouldn’t be contingent on whether or not you live in the most populated area of any given county,” he said. “It’s absurd.”

How to fix it?

In the show, Minhaj compared this problem to a crisis in the 1930s when rural Americans didn’t have electricity because it was too expensive for big companies to build power lines, given the number of people they’d serve. To fix this, the federal government passed a bill providing infrastructure for those underserved communities.

But the Federal Communications Commission (FCC) is not going to help this problem, Minhaj explained in the Netflix show.

“Broadband companies and the FCC are protecting cable companies at the expense of rural and poor Americans who don’t have high speed internet,” he said.

The FCC has encouraged the private sector to fix the problem.

Instead, municipal governments across the U.S. have started creating their own internet companies, Minhaj said on The Patriot Act.

Vice reported in 2018 that more than 750 communities have built their own Internet Networks. But South Carolina is one of 19 states with barriers in place “that discourage or prevent local communities from deciding locally if such an investment is a wise decision,” according to Muninetworks.org.

In South Carolina, there’s a “lot of red tape” stopping local governments from playing a role in the Internet business.

“(The law) does not say on its face that local governments ‘can’t’ set up their own (internet companies), but it almost makes it impossible for them to just do it if they so choose,” Bamberg told FITSNews.

Bamberg’s bill might sound familiar to the Growing Rural Economies with Access to Technology (GREAT) Program that passed in the House last year, The State Newspaper reported.

Both the bills aim to accomplish the same mission of improving sluggish Internet speeds in underserved communities, Bamberg said. But the difference is the GREAT program allows the companies to apply for state funding to pay for the infrastructure in certain areas.

Bamberg says the two bills could go “hand and hand.”

“There would be nothing that would stop undermine a local governments from entering into joint ventures with a private provider,” he said. “The GREAT bill would enable people to apply for state money to assist in these projects.”

The big difference between the two bills is the money.

“My bill does not require the state to spend any money,” he said. “We’re not growing state government or anything like that. We’re just giving local governments the option to break the chains of large internet service providers.”

Bamberg said his bill is not about a Republican or Democrat issue.

“This is about whether or not government cares about rural South Carolina,” he said.