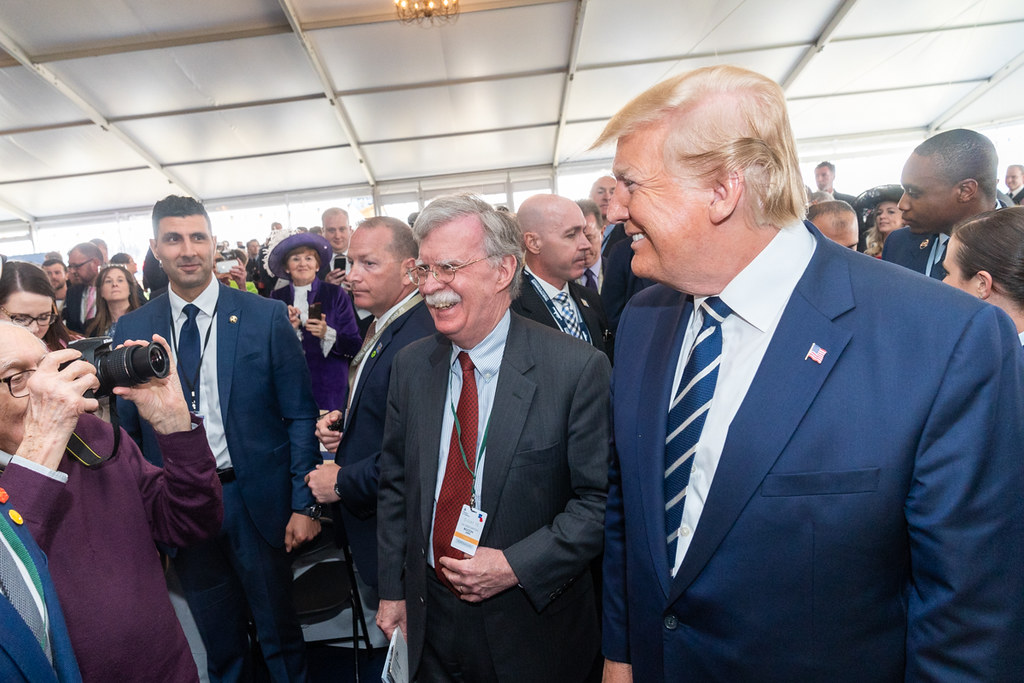 Trump announced on Twitter that he “informed John Bolton last night that his services are no longer needed at the White House.”

“I disagreed strongly with many of his suggestions, as did others in the Administration, and therefore I asked John for his resignation, which was given to me this morning.” Trump tweeted.

“I thank John very much for his service,” Trump adding, noting that he would be naming a new national security advisor next week.

The tweets were sent less than two hours before Bolton (above, far left) was scheduled to appear at a press conference with U.S. secretary of state Mike Pompeo and secretary of the treasury Steve Mnuchin.

Bolton had a differing view of the exchange, tweeting that he “offered to resign” on Tuesday night but that Trump told him “let’s talk about it tomorrow.”

However it went down, this news outlet was glad to hear that Bolton – one of the leading “neoconservatives” (a.k.a. warmongers) in Washington, D.C. – was out of a job. Well, check that … we do not wish unemployment on anyone, but we are glad Bolton is no longer in a position of influence as it relates to American foreign policy.

Not that it seems he was successful in imposing his unsustainably imperialistic vision on a president who – at least on this issue – has been somewhat true to the non-interventionist ideals he campaigned on back in 2016.

Despite Trump’s moorings, Bolton has been pushing him toward war … with Syria, Iran, Venezuela, North Korea, Russia, you name it.

Like the late U.S. senator John McCain (and his warmongering ally, Lindsey Graham), Bolton does not really care who America is fighting as long as it is fighting someone.

“Let there be no mistake – there is no war for regime change, anywhere, that John Bolton wasn’t for,” noted Jon Soltz, a two-time Iraq War veteran who founded a liberal veterans organization. “He sees troops not as human beings, with families, but as expendable resources, in his real-life game of Risk.”