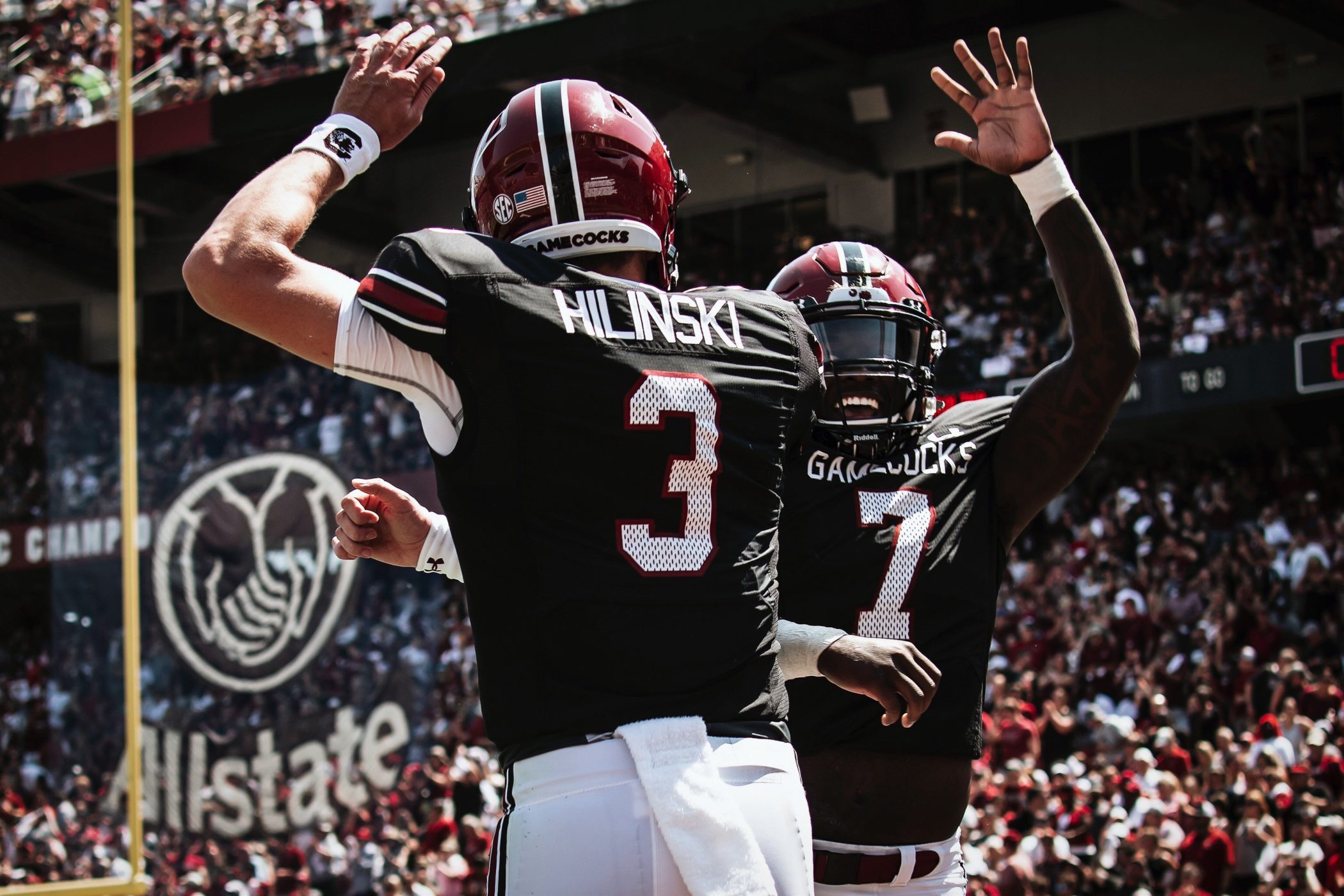 The Ryan Hilinski era is officially underway at the University of South Carolina … although it will be another week before Gamecock fans get a sense of exactly what they have in their true freshman quarterback.

Hilinksi – making his first career start in place of the injured Jake Bentley – led head coach Will Muschamp’s Gamecocks to their first win of 2019, an emphatic, record-breaking 72-10 rout over Charleston Southern of the Football Championship Subdivision (FCS).

Hilinski wore No. 3 in honor of his brother, the late Tyler Hilinski, who committed suicide in January 2018 less than three weeks after making his first collegiate football start for the Washington State University Cougars. Six months after his death, it was revealed that Tyler Hilinski suffered from chronic traumatic encephalopathy – a neurodegenerative disease caused by repeated head injuries.

On several occasions during Ryan Hilinski’s debut on Saturday, the 18-year-old celebrated big plays by flashing his brother’s number to the heavens in an emotional tribute – including once after he delivered a pinpoint strike on a 60-yard bomb to senior wide receiver Bryan Edwards.

Edwards was Hilinski’s top target on the day, hauling in five catches for 112 yards and a pair of scores.

“I think they were both out there today,” Hilinski’s mother Kym Hilinski said during a poignant mid-game interview with reporter Dawn Davenport of the SEC Network, adding her late son Tyler was an “angel on (Ryan’s) shoulder.”

Kym Hilinski even acknowledged that she inadvertently called out her late son’s name when Ryan Hilinski took the field for his college debut.

“I hope he’s there with him all season,” she said.

A little heavenly help certainly wouldn’t hurt as Hilinski must now navigate the toughest football schedule in America, a slate that includes games against No. 1 Clemson, No. 2 Alabama, (at) No. 3 Georgia, No. 8 Florida and (at) No. 12 Texas A&M.

First on tap? The Crimson Tide – who come to Columbia, S.C. next Saturday eager to avenge a 2010 loss.

Hilinski played for most of the first three quarters of the game against Charleston Southern, completing 24 of 30 passes for 282 yards, a pair of touchdowns and one interception. The 6-foot-3, 230-pound native of Orange, California also ran for a four-yard touchdown as the Gamecocks (1-1, 0-0 SEC) amassed a school record 775 yards against the hapless Bucs (0-2).

That mark shattered the old record of 679 yards – set in 1996 against Louisiana Tech.

South Carolina also set a new school record with 493 rushing yards – breaking a mark set way back in 1937 against Presbyterian.

Leading the way on the ground was true freshman running back Kevin Harris. A 5-foot-11, 225-pound native of Hinesville, Georgia, Harris piled up 147 yards on just six carries – half of which went for scores. All three of Harris’ touchdowns (and the vast majority of his yardage) came in the second half.

One of those touchdowns? This 75-yard gallop late in the fourth quarter …

Decked out in throwback “Black Magic” Under Armour jerseys honoring the successful teams of the 1980s (when the late Joe Morrison strode the sidelines), South Carolina scored its most points ever under Muschamp.

The Gamecocks will find the sledding infinitely tougher next week against Alabama – a perennial national championship contender that consistently boasts one of the best defenses in the nation.

Not only was Charleston Southern an FCS opponent, but the team is a middle-of-the-pack program in college football’s second tier. The Bucs were ranked No. 62 out of 126 FCS programs in the preseason – and that was before giving up more than 500 yards and 27 first downs in a season-opening loss to Furman.

Alabama? The second-ranked Tide has not lost to an SEC East school since falling to the Gamecocks 35-21 nine years ago. Head coach Nick Saban’s team has also won four national championships since then.