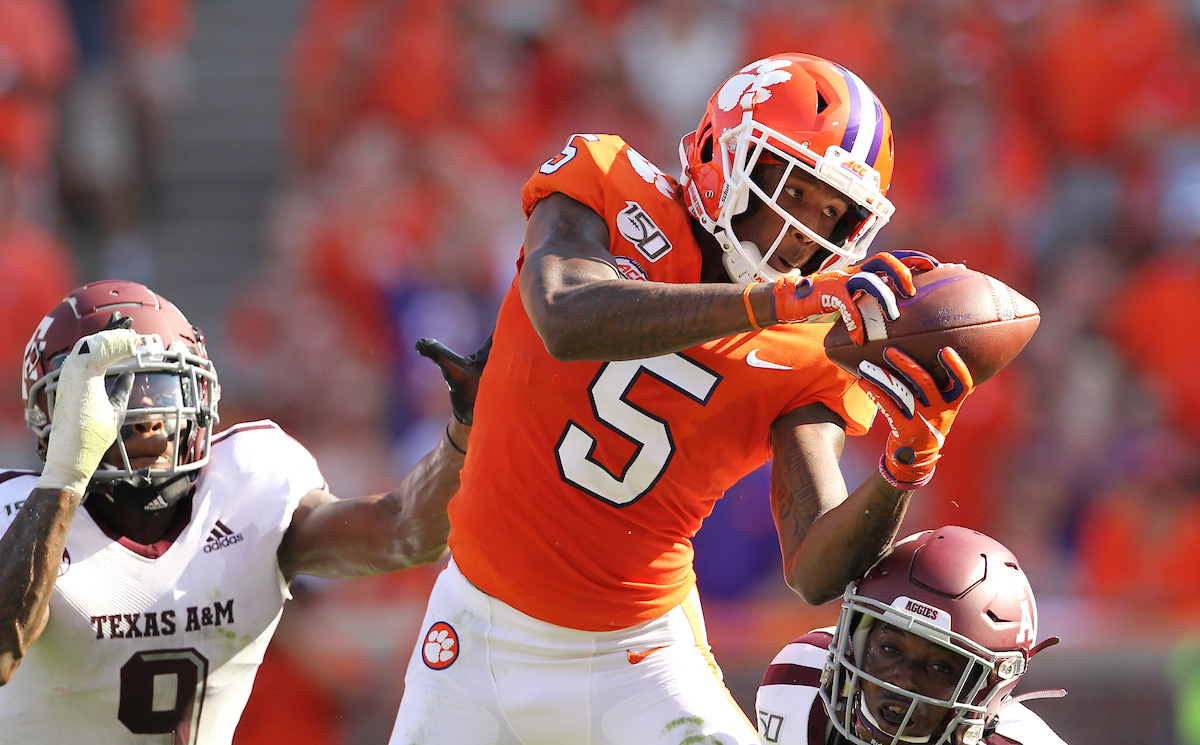 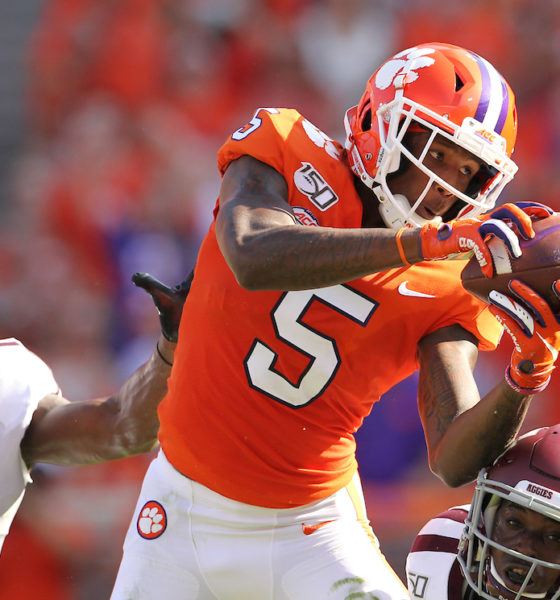 There was no upset …

Despite its bold predictions to the contrary, twelfth-ranked Texas A&M never got close to knocking off top-ranked Clemson during their showdown in Death Valley on Saturday afternoon.

After a nip-and-tuck game a year ago in College Station, Texas, the Aggies (1-1, 0-1 SEC) were beaten decisively by head coach Dabo Swinney’s Tigers (2-0, 1-0 ACC) in what was billed as the toughest game on Clemson’s 2019 schedule.

Sophomore quarterback Trevor Lawrence bounced back from a middling performance in the Tigers’ season-opening win over Georgia Tech to connect on 24 of 35 passes for 268 yards with a touchdown and an interception.

The sensational sophomores combined for 11 catches and 166 yards – with Ross hauling in seven grabs for 94 yards, including a 30-yard touchdown reception from a scrambling Lawerence that gave Clemson a lead it would never relinquish early in the second quarter.

Lawrence (above) also ran for a touchdown against the Aggies – his second straight game with a rushing score. But it was his great escape from a trio of blitzing A&M defenders on the touchdown pass to Ross that highlighted his improved mobility this seasons.

“We wanted to leave no doubt this year,” Lawrence said after the game. “I think we did that.”

It was up to the heralded signal-caller to deliver offensively after Texas A&M’s defense shut down 2018 ACC player of the year Travis Etienne. After exploding for a career-high 205 yards on twelve carries last Saturday, Etienne was held to just 53 yards on 16 carries against the Aggies – although he caught four passes for 52 yards from Lawrence.

“Lawrence played the quarterback position extremely well today,” Swinney said after the game. “He was gutsy, tough and showed a lot of great heart and leadership.”

With its featured running back held in check, Clemson turned to backup Lyn-J Dixon – and the 5-foot-10, 190-pound sophomore from Butler, Georgia did not disappoint. Dixon picked up a team-leading 79-yards on 11 carries – including a four-yard touchdown run late in the third quarter that put the game on ice.

The real story of the game, though, was the Clemson defense.

After losing all four of its starting defensive linemen to the NFL (including three first round picks), coordinator Brent Venables’ unit pitched an absolute gem – holding the Aggies’ explosive offense to an anemic 289 total yards.

The Tigers’ dominating “D” also forced a pair of key turnovers in the game – including an interception and forced fumble on Aggie quarterback Kellen Mond. After putting up 430 yards against the Tigers last year, the 6-foot-2, 210-pound junior was limited to just 236 yards passing – and half of that total (and his lone touchdown) was put up against Clemson’s defensive reserves.

Clemson senior safety K’Von Wallace (above) – the hero of last year’s win over the Aggies – came up big again in this game, notching a team-leading nine tackles (including a big sack of Mond late in the third quarter).

Swinney praised Wallace and the Tiger secondary for responding the way they did after Mond carved them up a year ago.

“We did a tremendous job of being well-positioned, and we made great plays on the ball,” Swinney said.

Clemson has now won seventeen consecutive games – the longest active streak in the NCAA. They are likely to be heavy favorites in all ten of their remaining regular season contests, too, as the only ranked team left on the Tigers’ 2019 schedule entering the weekend was No. 21 Syracuse – which was pummeled by former ACC opponent Maryland on Saturday.

The Orange nearly beat Clemson a year ago – but backup quarterback Chase Brice led the Tigers to a dramatic come-from-behind victory after Lawrence was knocked out of the game (his first collegiate start).

Saturday’s kickoff from the Carrier Dome in Rochester, New York is scheduled for 7:30 p.m. EDT on September 14 with ABC providing national coverage.

South Carolina Football Bounces Back With Ryan Hilinski At The Helm