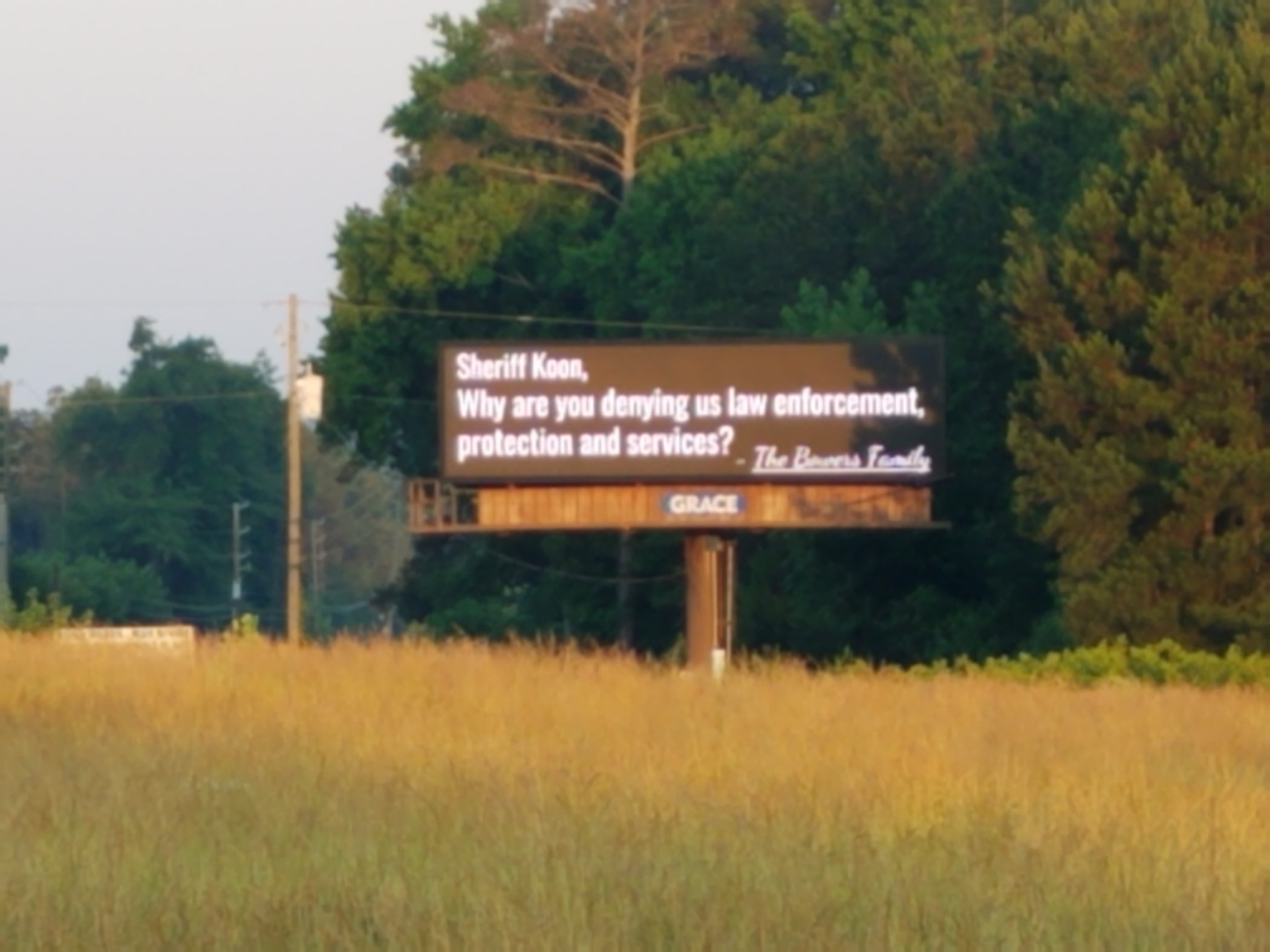 A Lexington County, South Carolina resident who is infuriated with the S.C. Department of Transportation (SCDOT) over a controversial road project now has his sights set on county sheriff Jay Koon.

According to Bowers, he called 9-1-1 on Friday, May 3, 2019 to report a pair of trespassers on his property – which is located next to the Leaphart Road bridge over Interstate 26 near West Columbia, S.C.

Bowers said Lexington did not dispatch deputies to respond to his call for more than two hours.

“The trespassers were subcontractors removing silt barriers for the SCDOT Leaphart Road bridge replacement project,” Bowers wrote in an email to Lexington County attorney Jeff Anderson, a copy of which was obtained by this news outlet.

Wait … the trespassers were road workers? Yes … according to Bowers, he placed them on trespass notice two days earlier, on May 1, 2019.

“My conversation placing the subcontractor on trespass notice was recorded as was the trespassing,” Bowers continued in his email. “They even admitted to the responding deputy that they trespassed, but the deputy flatly refused to do anything not even (file) a report. He claimed a trespass notice had to be done by certified mail or in the presence of law enforcement.”

“It was clear this deputy was not going to help us one bit with a request for simple law enforcement,” Bowers added.

What is the origin of this dispute?

According to his email, Bowers is upset because the SCDOT bridge project has allegedly infringed upon his private property rights and imposed hardships upon his special needs child.

“Our home and our neighbors’ homes were being damaged by vibration caused by a vibrating drum roller being operated in close proximity to our homes; the noise level in our yard was over 100 decibels; there was dust everywhere coating everything we own; and the smell of sulfur from the off road diesel fuel was ridiculous,” he wrote.

Bowers is obviously not messing around when it comes to obtaining satisfaction on this matter, either.

Here is an excerpt from his email to Anderson …

If the Sheriff’s Department does not want to address each of these issues, then we will retain a civil rights attorney to address the ongoing denial of law enforcement services. I have also purchased and parked several web domains … for websites that will expose everything and I do mean absolutely everything that has happened to us and our neighbors.  I’m currently working on securing funding to lease roadside billboards starting in Myrtle Beach, Charleston and Greenville to promote this website with the intent of informing as many people as we can about what was allowed to happen in Lexington County.

Anderson responded with an email of his own, informing Bowers his office was “not familiar with the situation and issues” related to his complaint, but that he would forward the email to the general counsel for the sheriff’s office “so that they will be aware of your concerns.”

This message did not placate Bowers, who curtly informed Anderson his attorney had already sent multiple letters to Koon – who “never responded.”

“Sheriff Koon’s silence makes one wonder who he is protecting and serving because it certainly is not us or our neighbors,” Bowers wrote.

Bowers’ billboards immediately began drawing attention in Lexington County, but he told us late Wednesday he agreed to temporarily suspend his contract with Grace Outdoor after Koon called the agency in the aftermath of a recent murder-suicide in the area.

“Koon called Grace outdoor today asking them to take down my message using the murder suicide as a reason,” Bowers told us. “When contacted by Grace Outdoor, I agreed to a pause in the contract for a few days.”

The billboards will be back up in a few days, though, he said.

Our view? We certainly understand Bowers’ frustration. Who wouldn’t? Intrusions on one’s private property are always vexing, and dealing with a sustained nuisance that is causing problems for one’s child certainly has to be maddening. It seems clear to us Bowers has a legitimate protest with SCDOT, and we hope this article – like stories we have written in the past related to bad behavior by the agency – will draw attention to it.

As for the allegations against Kuhn, we are less inclined to give them as much credence … believing this to be a matter for the courts, not the cops.

Having said that, we support Bowers’ right to shout his views from the rooftops … or in this case, the roadside. Hell, we may even get our ad agency to send him a rate kit!