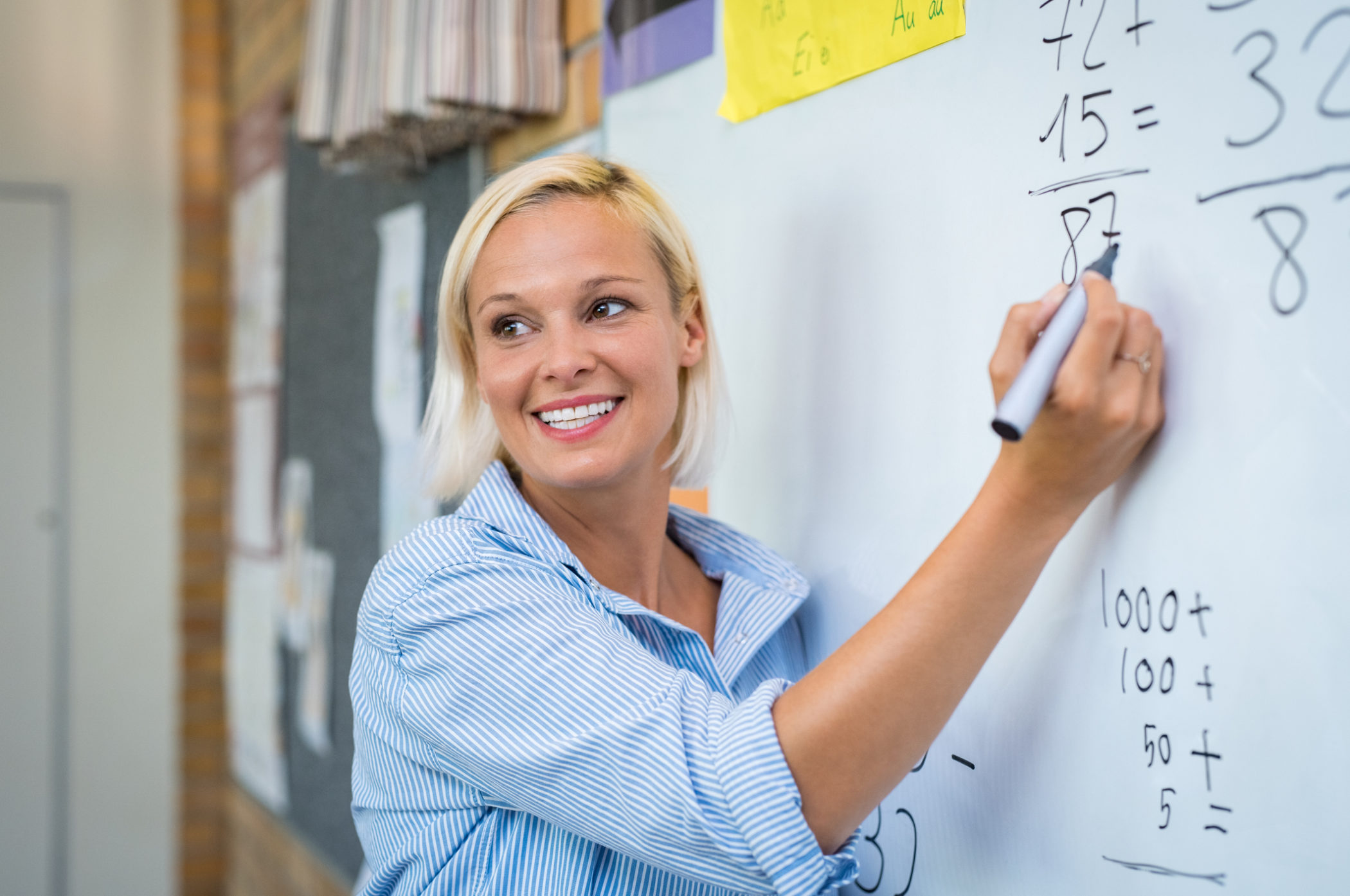 by JACKIE WELLS-LINDSTROM || I grew up in a house where my mother worked in a school and the dinner table was regaled with stories about how teachers made for some of the worst students. In college I was busy writing a thesis on comparative European politics and my roommate was busy summarizing children’s books. I can tell you now without a shadow of a doubt I felt intellectually superior and certainly NEVER wanted to be a teacher. Fast forward 20 years, two kids, and one Jerry McGuire mission statement moment later and I found myself heading to the state department to find out how to do that thing I never wanted to do. At the top of my career in advertising, making more than double what my starting salary as a teacher would be and only working three days a week, I decided to leave corporate America and do the unthinkable – become a teacher. What could be more noble than education, right?

Ten years into this profession, I was completely burned out and feeling like an utter failure. No, not because my test scores were bad – from year one, they were some of the best in the district and I maintained a five-star ranking – yes that’s a thing. I didn’t quit because of the pay – although I will tell you, sometimes I didn’t even bother looking at the paystub because it was so disproportionate to the amount of work and effort given it was just depressing. This control freak who thrives on efficiency just could not take not one more day of the hot mess that is education. So, while websites such as FITSNews and other outlets report about the May 1 “Walkout” (and want their tax money back for this day), I have a whole different perspective on the topic.

Much of the criticism I have seen regarding the protest is based on two things … why should teachers get more money and why South Carolina has poorly educated students. I saw the rank of 50th tossed out yesterday and specifically wanted to address this first. Did you know that each state gets a ranking based off standardized testing but not every state gives the same test? In fact, some tests are harder than others, so when we get judged off of the results of our standardized testing, if in fact our students took another state’s test they may actually score higher. Some states don’t even have every student take the test. When we came up with national standards in what universe did it not occur to politicians to come up with one test that would be given to all students to better compare results? When districts send home the school report cards, do they explain those results? No – but hey, why bother when they can just blame teachers? Did you know that when a school gets a C, D, or F on a report card, these results can also be completely misleading?

These results are based on growth in standardized testing but do not compare the apples to the apples but apples to oranges. Meaning, they don’t compare little Suzie’s growth one year to the next but instead compare little Suzie’s growth to little Johnny. Great system, don’t you think? My point is that policy makers screwed the pooch when they structured the grade scale for individual schools, districts and states. While numbers don’t lie, they can certainly be manipulated and misleading. I say this with much caution but for those of you sold on your numbers…just maybe you get what you pay for. (***I honestly believe you get way more bang for your buck.)

According to the National Education Association (NEA), the average teacher salary across the country is $60,483 but in South Carolina it is $51,027. As someone with a college degree, 20 years of work force experience and most of a Master’s Degree, at the end of my 10-year teaching career, I was WELL BELOW this average salary. This protest, which by the way, I am not completely sold on as far as getting the objective accomplished, is about so much more than a 4-9 percent pay raise. PLEASE. I know this cliché has been said 100 times before but what is 101? Teachers did not go into the profession to get rich. Take a second, say it again. Educators like myself believed they could make a difference in the world. They could inspire, love on and teach little ones and not-so-little ones alike.

I believe the pay raise is more symbolic of how teachers are thought of and talked about in our society. Yes, teachers have weeks off during the summer, yes they have a benefits and retirement package. They work for a salary, so they essentially don’t get paid for those months not “working,” they just choose to have their salary spread over a 12 month period. During those summer months they are attending professional development seminars, preparing new exciting ways to make learning fun (by the way, ugh! I resorted to all but standing on my head while juggling and spitting out test facts and was EXHAUSTED daily).

They are cleaning the nastiness that is a classroom and a plethora of other behind the scenes action that no one sees.

They are getting an emotional recharge from 180 days of wondering if the hungry/ homeless children in the classroom are getting fed and are being taken care of, getting cussed by parents and students, chasing down parents at sporting events because they won’t come to a parent meeting, explaining to the helicopter parent that no, you didn’t lose their child’s work or why they only received a 99 instead of 100 on an assignment, reporting a suspected child abuse, begging and pleading with children not to join the gang they are being influenced by, explaining to the administration why the student who came to you with not even basic English skills is not testing proficient within 90 days of you laying eyes on them … not to mention the daily grind of counseling the sometimes 100+ feelings walking in and out of the door all the while making sure each and every one of them know who invented the wheel and exploring the impact of said invention on their life and making sure that through this learning they were also able to incorporate reading, math and science skill application all the while giving them the warm fuzzies.

This all happens between card games with the nurses. Do you realize that if the teachers go out to lunch or dinner on said protest day, the waiter that serves them will probably make more that day than the teacher and will most certainly be treated with more respect? While you want your tax money back for the day of protest, keep in mind that you are paying the person that is in charge of your most precious asset for eight hours a day a comparable salary to the average server in South Carolina.

To be a teacher you literally have to put on armor. Every. Single. Day. You are fighting bureaucracy that is not necessarily designed to excel student achievement. You are fighting the administration to get time to do work that is required of teachers other than student face time. You are fighting parents for a myriad of reasons and you are fighting students to get their young, impressionable minds to understand the power they have in knowledge. For a little taste of what teacher life is like, next time your baby is in the middle of throwing a temper tantrum, take them to the DMV while on the phone with your mother-in-law and teach them long division. By the way that trip should be made fun for your kids and if you don’t get immediate genius results you suck. Before you tell me you homeschool so you understand, keep in mind you have three or four students in a mostly controlled environment. I am not disrespecting the homeschool mom or dad – I could never teach my own which is why my seven-year-old cannot tie his shoe but the truth is you are not working in anywhere near the same circumstances.

Maybe, just maybe, this protest is the ultimate battle to be treated with the respect and honor they deserve or just to stand up to the policy makers and finally scream it’s not us – it’s YOU! If education is a mess, and I would agree it is, it isn’t the front liners making next to nothing fighting day in and day out.

It is the continuous barrage of asinine policies put into place that have no proven track record and typically make one more battle for the teacher to fight. This ole girl could not do it. I LOVED teaching but so little of what I did was teaching. I loved my students and still hear from them from time to time and I admired many of my coworkers geared up with me in the trenches. I just couldn’t fight the good fight any more. Guess what, there are so many others just like me that are leaving the profession.

So before you start screaming about having to find a babysitter for the day because school closed, think about what your life would be like on the daily without those wonderful men and women that “babysit” your kids every freaking day. Maybe just be quiet if you don’t have anything nice to say and just let them have their day. I promise, you have gotten your monies worth and your kid is being served well. If they are not, try examining the policy behind the behavior. I can guarantee that the policies and monies spent in the school were in no way decided by the person at the head of the class. By the way, if you can read this article … thank a teacher.

Jackie Wells-Lindstrom is a mother of five, a former educator residing in the South Carolina Lowcountry.