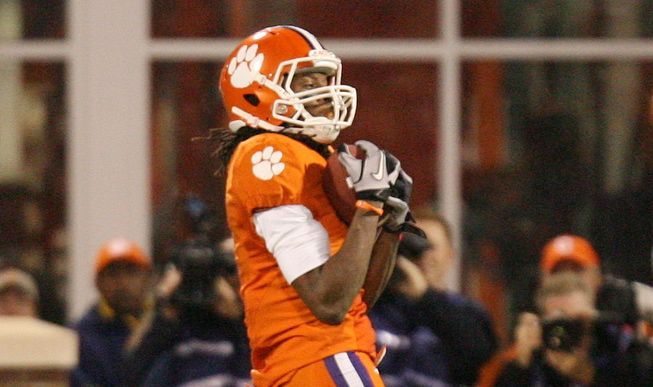 Former Clemson University wide receiver DeAndre Hopkins has been accused of trashing his hotel room at the Crowne Plaza in Indianapolis back in February during the NFL combine.

Urine and feces were found around the bathroom, toothpaste was left on the mirror and partially eaten food was on one of the beds. Neither player made any attempt to clean up the mess, according to witnesses, and neither player has taken responsibility for the room.

Gross. Hopkins shared the room with a wide receiver from Rutgers, but NFL sources told the network they believe Hopkins is to blame for what happened. Perhaps not surprisingly, Hopkins’ agent is disputing that – arguing both players bear responsibility for the state of the room.

With all eyes on super sophomore Sammy Watkins last year, it was Hopkins who turned in the best year of his career – hauling in 82 passes for 1,405 yards and eighteen touchdowns. All of those numbers were career highs. Hopkins was also super clutch in Clemson’s big bowl win over LSU, hauling in 13 passes for 191 yards (including a critical 26-yard reception on a fourth down play late in the game).

Prior to this incident, Hopkins was projected as a second round pick in this year’s NFL draft – which will be held next week at Radio City Music Hall in New York City.

How will this affect his draft stock?