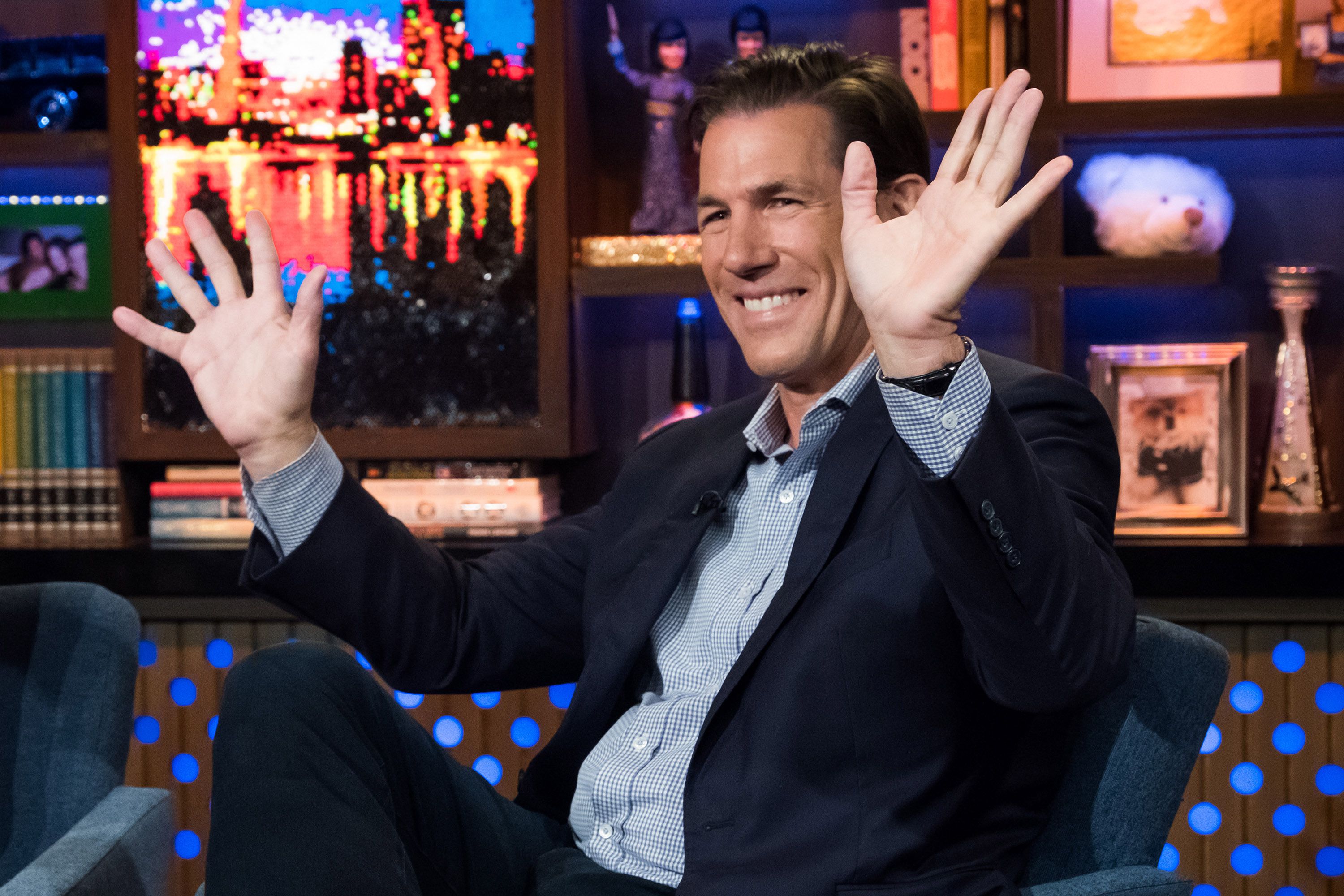 The 56-year-old disgraced politician – who is the subject of an ongoing investigation into multiple sexual assault allegations – was charged with assault and battery in the second degree.

News of Ravenel’s arrest comes a little over a month after the former statewide elected official announced he was quitting the wildly popular Charleston-based reality television show, which just wrapped its fifth season.  Most believe Ravenel was pressured to leave the show, however.  Whatever circumstance initiated the break-up, Bravo executives confirmed to People on Wednesday that Ravenel would not be returning to the program for a sixth season.

The allegations against the reality star are graphic.

According to a probable cause affidavit accompanying the warrant for Ravenel’s arrest, the alleged assault for which has now been charged occurred on January 15, 2015.  On that date, Ravenel is alleged to have “undressed and made sexual advances” on his unnamed victim.

Here is more of the narrative from the affidavit …

Detectives in Charleston said they were able to corroborate the incident date and substantiate “post-assault information” from multiple witnesses.  They also indicated that they had “retrieved photographs taken by the victim, which are appropriately time-stamped in reference to the incident.”

The victim also affirmatively identified Ravenel as her alleged attacker.

Why was he not charged with rape?  Good question … second degree assault charges are filed by law enforcement when an alleged victim sustains “moderate bodily injury” or when the accused “touches the victim’s private parts and injures the victim or threatens or attempts to injure the victim.”

If convicted on the charge, Ravenel could wind up in state prison for up to three years.

Ravenel was held at the sheriff Al Cannon detention center in Charleston County.  He was given a $20,000 personal recognizance bond. 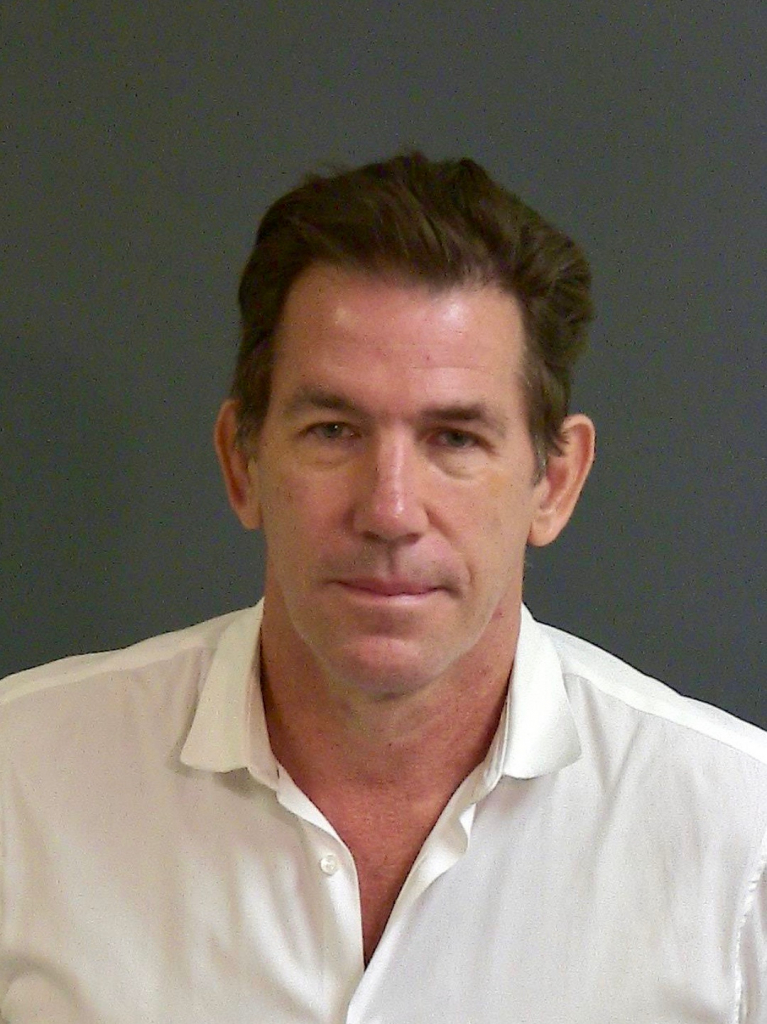 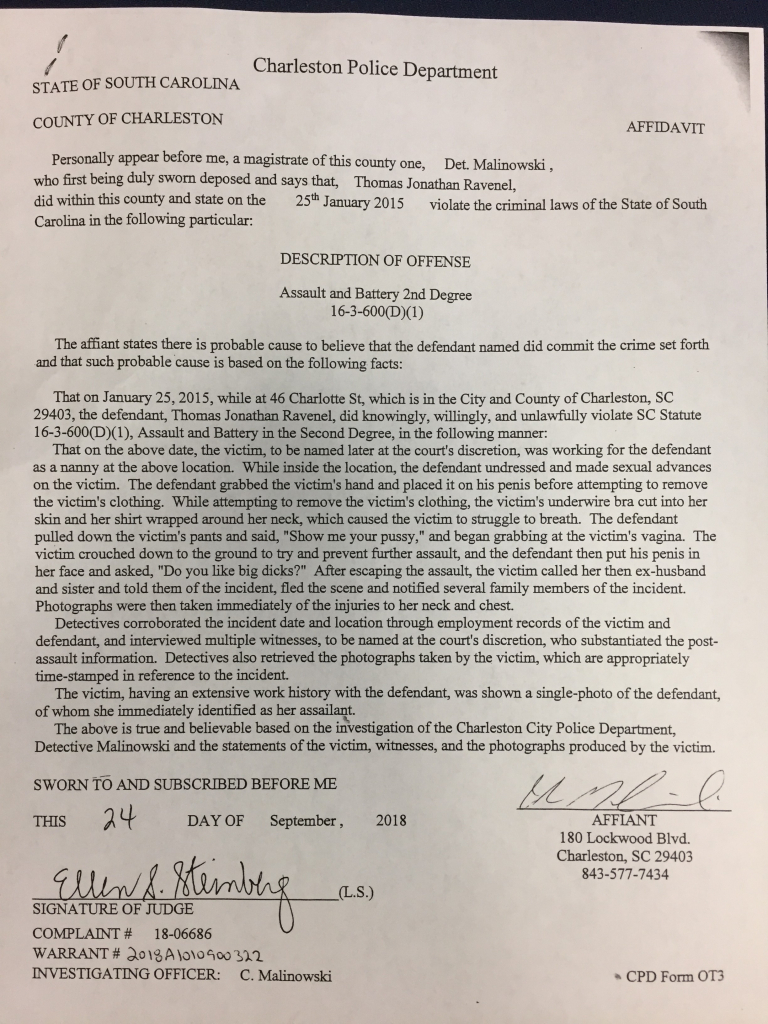 News of the investigation into Ravenel was exclusively reported by this news outlet back in May.  In a follow-up report, we revealed that several key pieces of evidence related to the case – including a cell phone loaded with what one source called “incriminating data” – were in the process of being turned over to detectives leading the investigation.

Also in May, our guest columnist Amy Feinstein published an exclusive interview with Nanny Dawn – the woman whose initial interview with Charleston detectives launched the investigation into Ravenel.

Dawn appeared at Ravenel’s arraignment, articulating concern for the two children he has with co-star Kathryn Dennis.  According to our sources, Ravenel had custody of the two children at the time of his arrest.  Those children were left in the care of his newest nanny, we are told.

Prior to that, on April 14 this news site exclusively reported on allegations raised (and reinforced) by Florida-based model and real estate agent Ashley Perkins – who launched a social media crusade aimed at exposing an alleged sexual assault involving Ravenel.  According to Perkins, she was present for a mediation hearing at the Belmond Charleston Place Hotel in June of 2016 in which Ravenel settled a sexual assault allegation involving Perkins’ mother, a 53-year-old Florida real estate agent.

Ravenel has declined to comment for any of our stories, however in mid-April he issued a blanket denial in response to any allegation of sexual assault involving a woman.

Bravo TV and Haymaker – the company which produces Southern Charm – claimed to be “investigating” the allegations against Ravenel, but it remains unclear whether they ever reached out to any of the alleged victims.   All the network appears to have done in response to the allegations was to issue a gag order to cast members prohibiting them from speaking publicly about the situation.

In that conversation, Ravenel told Washington he would never “behave ungentlemanly” toward a woman.  However, he also extensively discussed “secret settlements” related to sexual assault claims similar to the one he allegedly entered into in 2016 with Perkins’ mother.

As this news outlet frequently reminds readers, Ravenel – like any defendant – should be considered innocent until proven guilty beyond a reasonable doubt by our criminal justice system (or until such time as he may wish to formally enter a pleading in connection with the charge against him).