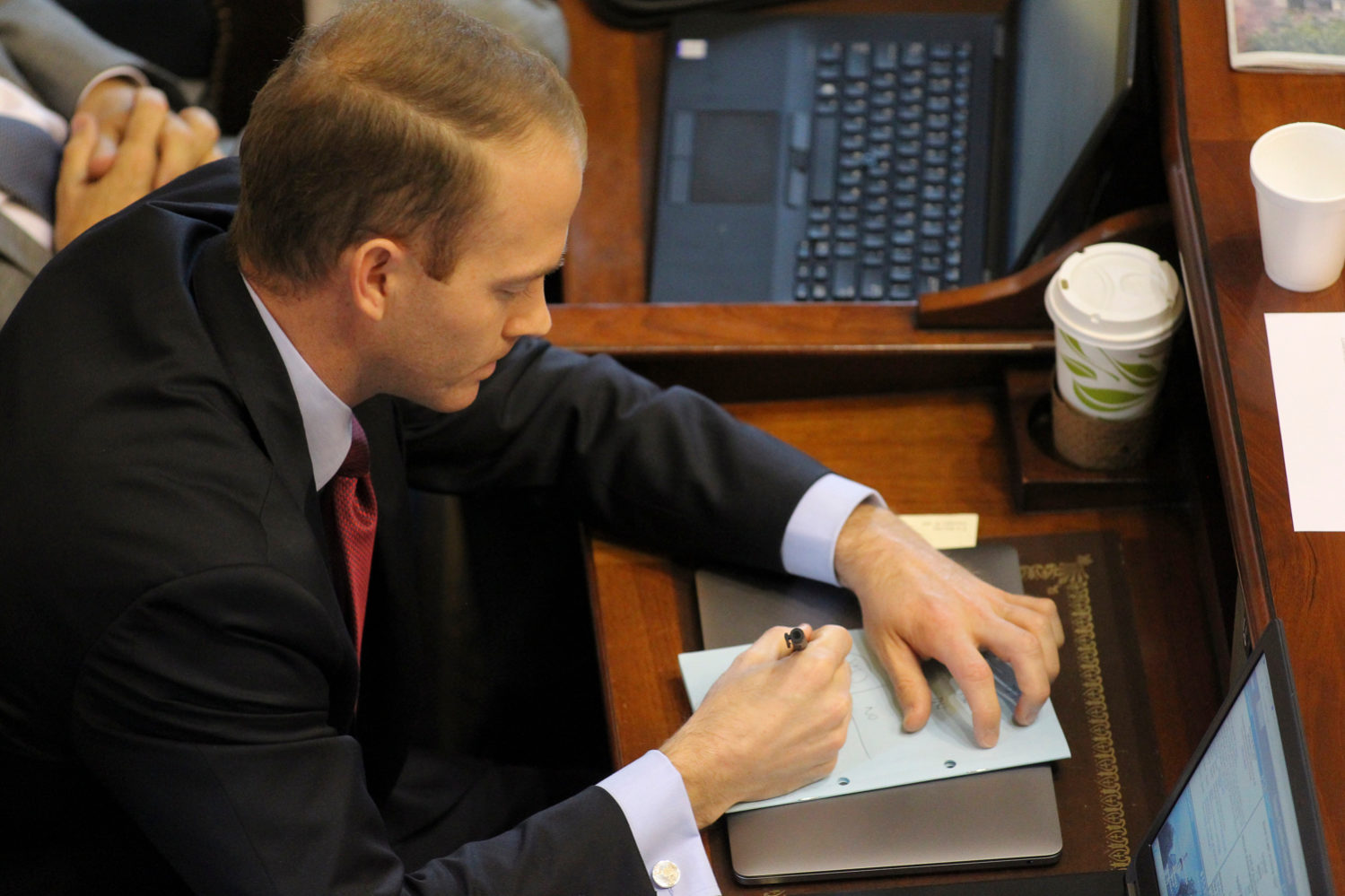 A freshman state senator who is also one of the leading “Republican” candidates for South Carolina’s fourth congressional district (map) told a top conservative activist to “f*ck off” – and then threatened to “crucify” the activist if they continued to criticize him.

Gotta love how social conservatives in the Palmetto Upstate handle their business, huh?

A successful Upstate businessman, Timmons is viewed as one of the frontrunners for this seat given his ability to self-fund his campaign, however incidents like the one that took place this week probably won’t help his cause.

Timmons, 33, became quite upset after Pressley Stutts – chairman of the Greenville Tea Party – questioned his surprise about-face in relation to a controversial hospital issue that’s been dominating headlines in the Upstate.

Limited government advocates (including Stutts and the Greenville Tea Party) are trying to get the trustees of the Greenville Health System (GHS) to use a competitive bidding process to dispose of nearly $4 billion worth of assets – and to route a fair share of these proceeds to county taxpayers, who subsidized the health care system to the tune of tens of millions of dollars in previous decades.

Timmons agreed with them for the most part – or at least he did until this week, when he dramatically altered the terms of legislation aimed at resolving an ongoing lawsuit over the hospital’s asset distribution plans.

That suit (.pdf) – filed in state court two years ago – was brought by several lawmakers as well as government gadfly Ned Sloan and his S.C. Public Interest Foundation (SCPIF).

Stutts and other limited government advocates who have been fighting on behalf of Greenville taxpayers on this issue felt betrayed, and communicated their displeasure to Timmons.

That’s when things went off the rails …

When you called me Thursday after I texted you, I asked you, “Why did you cave on the GHS legislation S1026?”  I was incredulous!  You then started stammering and offering me all kinds of excuses as to why you turned from the original bill (S. 1026) and basically gutted it with your amendment.

You said regarding the original S. 1026, “It’ll never pass the house.” If that’s the case, why did you introduce it in the first place?  What, in the name of God, caused you to turn with an about face?  To any intelligent human being, there has to be something more than you “didn’t think it could pass the house …”

… you also said, “GHS will get to the governor with campaign contributions and he will veto the bill.”  How do you know that?  Then I asked you, “So does that mean GHS is now going to get behind your campaign, William?” You asked me to repeat what I just asked you and I did.  Then, there was a pregnant pause and you said, “Pressley, FUCK OFF…..and don’t ever call me again!”  Then you hung up on me!  And then, you sent me a couple of threatening texts!  Is that how a sitting SC senator should act?  Threatening a constituent?  How am I supposed to respond?  If I fear your retribution as a senator for disagreeing with you and asking an honest question, we have crossed a serious line here, William.

Stutts, a 61-year-old former Navy chaplain, summarized his interactions with Timmons in an email sent to the senator on Saturday afternoon.

“Please know this has nothing to do with you personally, William,” Stutts wrote in the email.  “I like you!  Seriously, I really do.  You are a very affable guy.  I chalk your actions up as a rookie senator as one eager to get something done.  I admire that and applaud your efforts.  If it had gone well, you would have been hailed as the hero to the taxpayers.  But it has gone terribly sideways and, for better or worse, you are now the enemy of the taxpayers.”

Timmons campaign accused Stutts of playing politics in advance of what is expected to be a crowded and contentious race to fill Gowdy’s congressional seat.

“Those are some wild accusations and incredibly false statements in the email Mr. Stutts just leaked to press,” Timmons’ campaign manager Luke Byars said.  “You have to ask yourself what motivates Stutts to leak these kinds of personal political attacks only three months from a contested congressional primary?”

Stutts’ motivation aside, he did provide us with a copy of several of the “threatening texts” sent by Timmons – including one in which the senator vowed to “crucify” Stutts in the event he ever alleged “impure motivations” on Timmons’ part again.

Byars acknowledged that Timmons used coarse language in responding to Stutts’ criticisms, but he argued the politician was well within his rights to respond as he did given that Stutts questioned his integrity.

“Last week on a personal call Mr. Stutts directly accused senator Timmons of ‘selling’ his vote on GHS,” Byars told us.  “As a result, senator Timmons used colorful language to deny this in the strongest terms.  William Timmons is a former prosecutor with a strong family history that goes back generations in the Upstate and his integrity is everything.”

Conservative activists weren’t buying it, though …

“A close friend involved in state politics questioned a candidate running for Congress about his unilateral decision to privately renegotiate a controversial deal involving a state-chartered entity,” well-known conservative activist Karen Iacovelli wrote on her Facebook page late Friday in the wake of the dust-up.  “The details are not important. The arrogance of this candidate is a critical window into the diabolical narcissism infecting politics, our culture and, yes, personal relationships.”

Iacovelli added that Timmons’ response to being called out was “a classic indication of a pathology not becoming of someone who claims the public trust.”

As for the substance of the issue (the hospital legislation), Iacovelli said Timmons’ actions on the GHS bill “were not only in opposition to what a majority of his elected colleagues had agreed upon, but his own actions as sponsor of a bill curtailing a monopoly position in the state marketplace by a large organization.”

Sources close to Iacovelli tell us she was contacted by Timmons’ campaign and asked to remove her Facebook post (even though it did not reference the senator by name).  She refused to do so.

Our view?  This situation is a potential disaster for Timmons – not only in terms of the ideological ground he has staked out on a divisive regional issue, but perhaps more importantly in terms of the poor temperament he has displayed in responding to his critics.  We understand Bill Clinton’s famous maxim about being “strong and wrong,” but Timmons vulgarity and threatening messages strike us as way out of line.

We don’t have a dog in the GHS fight – nor do we have a candidate of choice in the fourth congressional district race (yet) – but this exchange certainly doesn’t endear us to Timmons.

Having said that, we would extend an open invitation to him to share his views on the deal he is pushing regarding the hospital lawsuit – as well as his exchanges with Stutts and other critics.