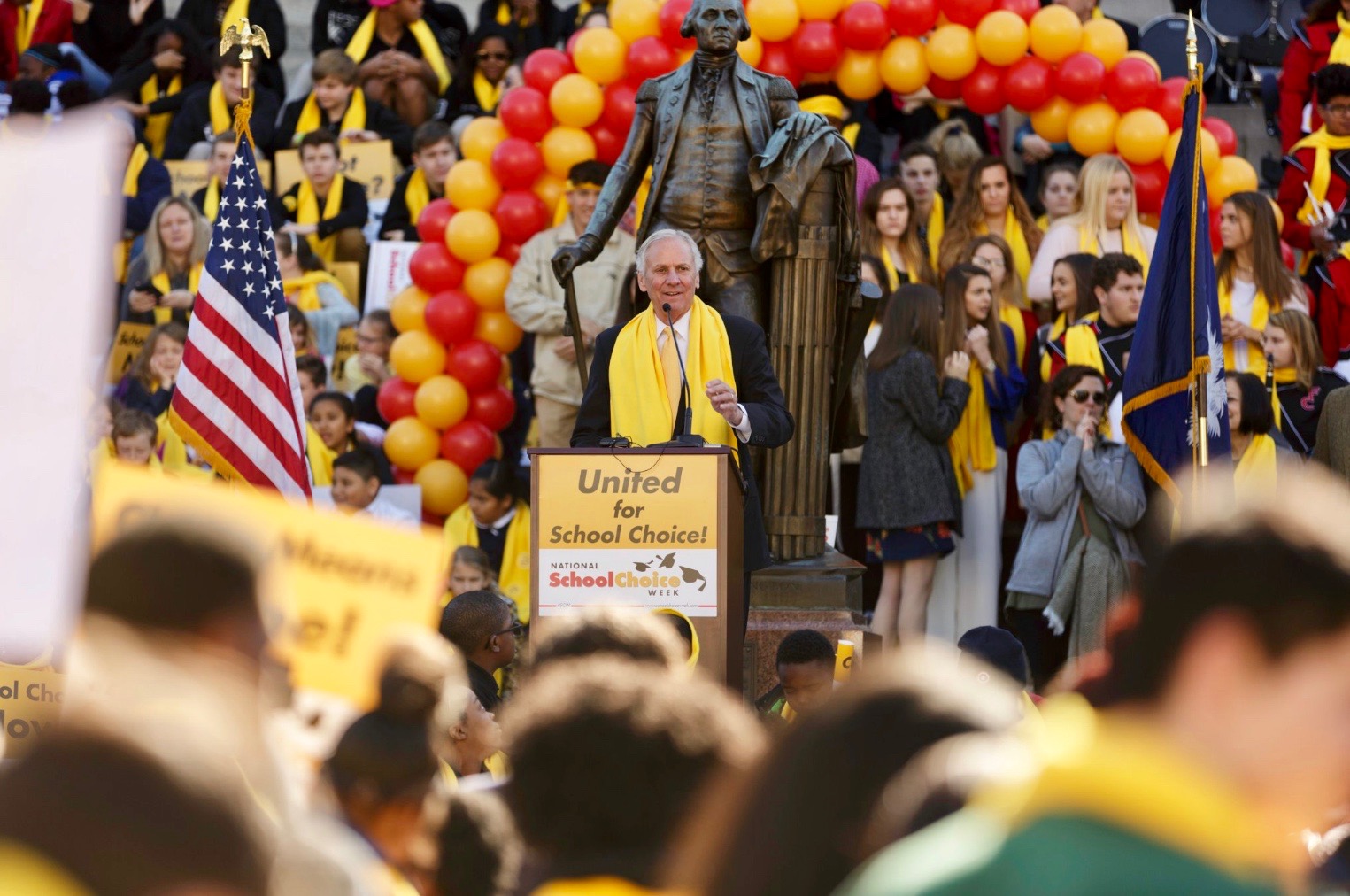 Thousands of South Carolinians rallied at the State House in downtown Columbia this week in support of expanded parental choice.

Rallies like this have taken place for years … they just haven’t been met with action by state lawmakers.

As a result the Palmetto State’s education system remains an unmitigated disaster – with very real, very pernicious impacts on our broader economic health.

This year’s “school choice” rally was attended by South Carolina governor Henry McMaster (above), who has professed his support for  “vigorous, accountable, innovative school choice.”

“Minimally adequate education bears no relation to what we are going to provide to our children, they will all get the best education in the United States, and one of the way we’ll do that is with more education choices for parents and students,” McMaster said.

It also stated – explicitly – what we’ve been saying for years, namely that throwing more money at this failed system has not worked.

Unfortunately, hours after attending the school choice rally at the State House McMaster outlined his support for an education system “anchored by traditional public schools” in his 2018 State of the State address.

The only choices envisioned in his plan?

“Charter schools – all public,” he said.

No one in the Palmetto State is advancing real school choice …

How have these status quo policies (a.k.a. more money) worked out for South Carolina?  It’s no secret: Our state “boasts” the worst government-run schools in America – at an ever-escalating cost.

Real “school choice” in South Carolina is nonexistent.  Sure, our state has a limited tax credit program for special needs children, but it’s not part of permanent law and it only provides $11 million worth of scholarships each year.

By contrast, the state’s failed government-run system is spending $11.7 billion each year.

Even worse?  None of the current proposals aimed at expanding the state’s fledgling special needs program do anything to move the needle.

“Everything the state has done up to this point is (just) tinkering around the edges of South Carolina’s chronic academic woes,” we wrote back in 2016.  “True reform means empowering a broad array of choices for all students – not authorizing a mere sliver of choice that impacts only a handful of children.”

That means expanded choices for all students – special needs students, low-income students, you name it.  It also means providing substantive amounts of relief to all parents, whether they are choosing private or parochial school options.

Oh, and homeschooling needs to be incentivized, too.

Obviously we’ve been on board this campaign for years – before this news site was launched, even.  A dozen years ago, our founding editor Will Folks – then serving as press secretary to former S.C. governor Mark Sanford – offered a quote to The (Columbia, S.C.) State newspaper regarding the need for expanded choice in the Palmetto State.

“We’ve got a great deal for the current education bureaucracy,” Folks said at the time. “It can keep over two-thirds of the $9,800 it currently spends attempting to educate each individual child, and we’ll give parents access to the marketplace with the other third to make sure someone is actually educating that child.”

The paper’s editorial board didn’t like that quote one bit, blasting it as a “snotty remark” and calling the rhetoric “hostile” and “disturbing.”

“We are clearly witnessing an assault on the very concept of public education,” the paper concluded.

Well, twelve years later the only thing that’s changed is that state government’s failure now costs 30 percent more than it did then – even after adjusting for inflation.

We’re told S.C. senator Tom Davis (above) – a staunch school choice proponent – will soon unveil a more aggressive reform bill within the S.C. General Assembly.  We’re also told at least one of the “Republican” gubernatorial candidates running against McMaster will roll out a school choice agenda that dwarfs what he has proposed.

“School choice” is not giving government more money to repeat/ rebrand its chronic, generational failure.  “School choice” is letting the people keep more of their money, enabling the creation of a “vigorous, accountable, innovative” marketplace that improves all academic environments.  And outcomes.

Sadly, no one in South Carolina is advancing that vision … which is why our state continues to produce abysmal results at a growing cost to taxpayers, our children and our state’s economic future.