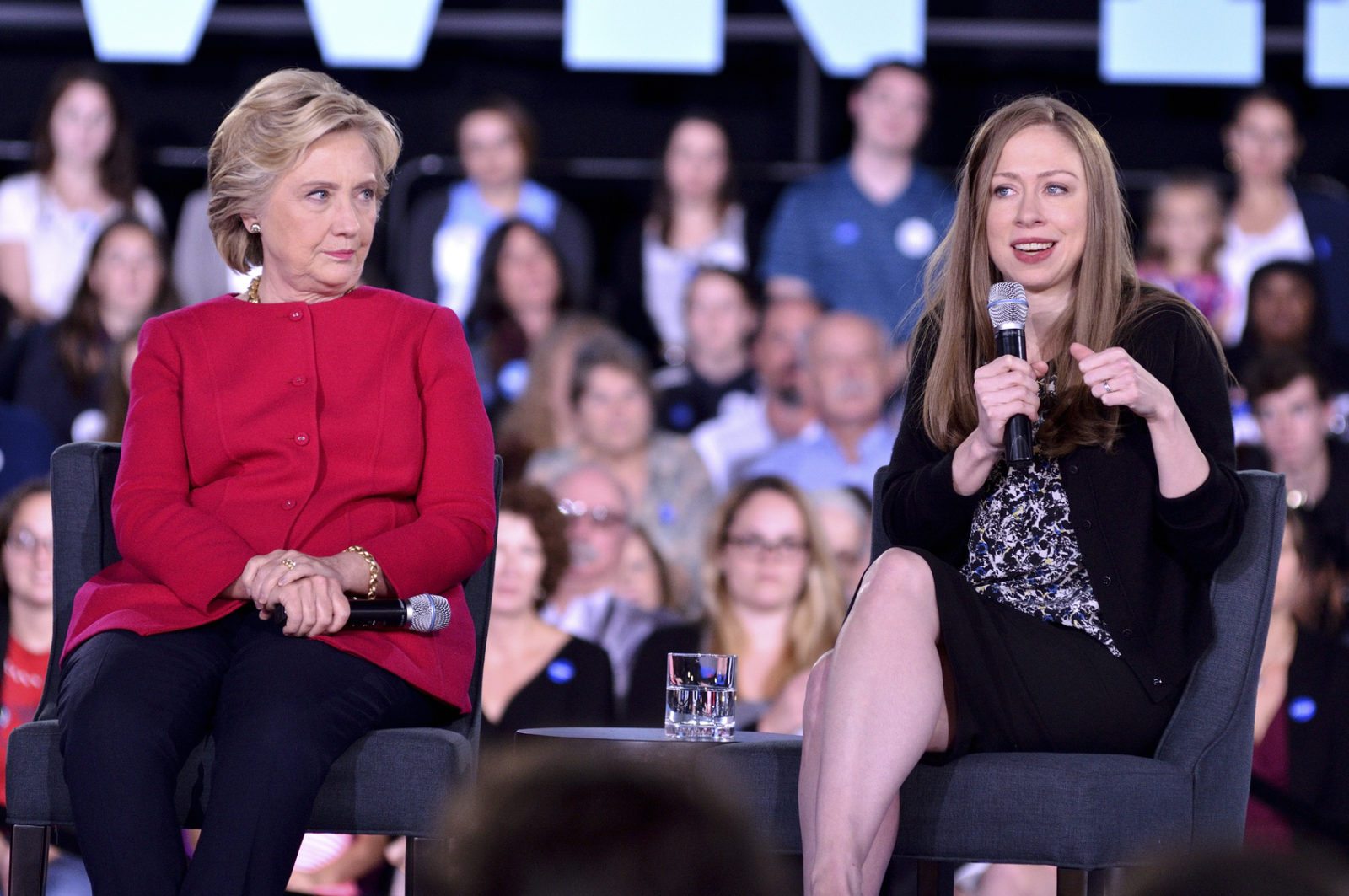 FORMER FIRST DAUGHTER CAN FINALLY BE HER OWN WOMAN …

|| By JAMES G. WILES || Every dark cloud, they say, has a silver lining. Possibly even for Democrats.

So, here, in a spirit of bi-partisanship, are three positive take-aways from Tuesday night for those Dems who unexpectedly find themselves to be members of the Mourning-in-America Community:

2. Chelsea Clinton (and her family) can finally have a private life.

3. The Democratic Party, if it chooses, is now free to regain and defend the legacy of FDR, Truman, JFK and LBJ.  If they do that, they will find themselves to be a competitive national party again.

Despondent Dems should re-learn the lesson of George McGovern and 1972.  By contrast, embracing Bernie Sanders and Elizabeth Warren is a recipe for the Democrats’ permanent minority status in American politics.  Proof?  Warren yesterday called for an escalation of class and race conflict in America, while Sanders suggested that the United States’ first Muslim Congressman should become head of the Democratic National Committee.

But why should we care about Chelsea Clinton? Because she’s been for twenty-five years one version of America’s sweetheart. Chelsea’s life would make a great situation comedy: The selfless daughter, endlessly sacrificing herself for her ne’er-do-well and embarrassing parents.

For some reason, ever since her father’s 1998 impeachment, I’ve had a soft spot in my heart for the lithesome (and toothsome) Chelsea. I’ve written before here in these infamous pages about her peculiar predicament – and appeal.

This website’s founding editor profoundly disagrees with me. But I don’t care. He’s just wrong.

We have literally watched Chelsea grow up before our eyes. She was 12 when her parents entered the White House. Nothing which followed was Chelsea’s fault.

So far, she’s even been spared a grand jury appearance.

How acute Chelsea’s predicament has sometimes been over the years came front and center once again when it was reported two weeks ago that it was Chelsea Clinton who blew the whistle on the self-dealing at the Clinton Foundation.  The investigation into the Foundation’s dubious fundraising practices and the resulting report occurred at her instigation.

Why?  Because, it appears, Chelsea wanted to protect her parents from themselves. Or, at least, the grifters swarming around them.

Next, who can forget Chelsea in August 1998 after the release of the Starr Report, bravely walking between her parents toward a White House helicopter to take the unhappy First Family to Martha’s Vineyard for what must have been the vacation-from-hell?

Not for the first time, she held the Clinton Family together. In the iconic picture, Chelsea walks between her parents, holding hands with both.  A disgraced father and a humiliated mother, on national television. And their college student daughter leads the way.

For more than 20 years, Chelsea Clinton has repeatedly paid the price for her parents’ rascally ways.

If there’s a rapscallion buried in Chelsea Clinton, it’s never shown. And I don’t believe the story about the Clinton Foundation paying for her wedding for one minute.

Actually, I do – but I bet Chelsea knew nothing about it.

Like her parents, Chelsea is no slouch when it comes to academics.  After graduating from Stanford, she pursued masters degrees at Oxford University and NYU.  She completed both and then took a job at NYU, before joining the international consulting firm of McKinsey and Company.

In 2015, she published her first book, a 400-page tome aimed at middle-schoolers.

And then, as Al Pacino says in Godfather III, “Just when I thought I’d got out, they pull me back in.”

Chelsea found herself going to work at the Clinton Foundation – and shortly thereafter, bringing in the Simpson Thacher law firm to make an independent investigation.  That report, leaked two weeks ago by Wikileaks, may have been the last bullet in her mother’s electoral chances.

There was public embarrassment in Chelsea’s love life too.  Her 2010 marriage to Marc Mezvinsky is a case in point. Although now blessed by two grandchildren, Mezvinsk is the scion of a Philadelphia Main Line family which – let’s just say – has had some major legal troubles of its own.

Marc’s mother, Marjorie Margolies-Mezvinsky, was a fprmer Philadelphia newscaster and one-term congresswoman who lost her seat after voting for Bill Clinton’s 1993 tax increase. She subsequently filed for personal bankruptcy.

Marc’s father was Ed Mezvinksy a former congressman who was convicted in 2011 of thirty-one federal felonies in connection with his embezzlement of a reported $10 million. He was released from federal prison in 2010. The couple are now divorced.

But all that’s in the past for Chelsea if she chooses.

Let’s hope she does. The sins of the parents have been visited on the coltish daughter long enough.  If Chelsea continues as a member of the Clinton Crime Family, well, that will only be by her own choice.  A mother of two, a wife, with money in the bank and a husband with a successful career in finance on Wall Street (first, Goldman Sachs; then a private equity fund; now a dodgy hedge fund), Chelsea can finally spread her wings.

In short, if she wants, Chelsea Clinton can finally say “goodbye to all that.”

Think of it: Her own woman. And, for the first time since she was the rambunctious daughter of Arkansas’ ultimate power couple back in the 1980s, Chelsea will finally be free to live a life out of the public eye.

Finally, this: in the shipwreck of her mother’s career and her father’s ensnarements, not a shred of scandal or mendacity has ever adhered to Chelsea Clinton.

Paralyzing dullness, yes. But not dishonesty. Not meanness.

In all the Wikileaks stories, nothing has come to light to suggest any knowing or intentional wrongdoing by Chelsea Clinton or that she was ever anything less than a dutiful daughter. When Hillary collapsed at the World Trade Center during the campaign, it was to Chelsea and Marc’s condo in the Flatiron District that Mrs. Clinton went to recuperate.

It is obvious that Chelsea Clinton loves both her parents.

It has cost her a lot.

I wish her well.