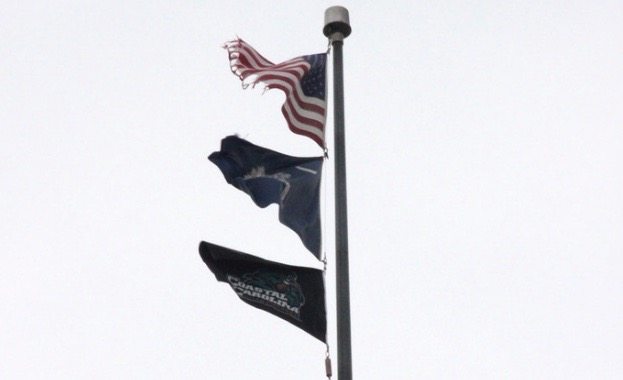 We would like to direct your attention to the three flags flying atop the S.C. State House dome on Thursday July 30, 2016.  They were the flags of the United States, the state of South Carolina, and a flag honoring Coastal Carolina.

We are all proud of Coastal Carolina’s national championship win in the College World Series, but the placement of this flag by our governor is a direct violation of our state’s Code of Laws.

These are laws she was elected to uphold – not break – even when it is to celebrate a national championship.

South Carolina Code of Laws Title 1 Chapter 10 Section 1-10-10(A) prescribes the types of flags which are permitted to be flown above the State House dome.  This sections dictates that only the flags of The United States and the state of South Carolina may be flown above the dome at any time.  It goes on to say that the act of raising any other flag above the State House dome shall require a two thirds vote in the affirmative on the third reading of a bill in both chambers of the General Assembly.

To our knowledge no special session was called for – nor was a two-thirds vote taken to consider the raising of this flag in the event that Coastal Carolina should win the championship. 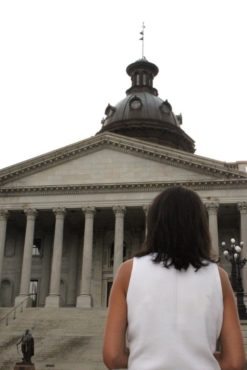 Now she has played a part in violating the same law.  She will say she is exercising her gubernatorial authority – an authority which (if she feels she has) she failed to use when she wanted the Confederate Flag removed.

Both instances require a two-thirds legislative vote by law.  There is no difference between her unbridled use of power and President Barack Obama’s “executive orders”.

Is our Governor not required to obey the Code of Laws she swore an oath to uphold?  The S.C. General Assembly would have gladly voted to show their support of Coastal Carolina – but our Governor put herself above the law and decided on her own to raise another flag. Something she has done over and over.

Who arrests the Governor when she breaks the law?

James: First of all, thanks for your letter.  Hard to argue with you on the letter of the law.  Frankly, we thought the real scandal associated with this flag-raising was the deplorable condition of the national and state banners … but at the end of the day we’re both probably reaching a bit in our stoking of outrage.  That’s okay – that’s what the marketplace of ideas is there for.  Having said that, I suspect if your party were to sue the governor – you’d win.