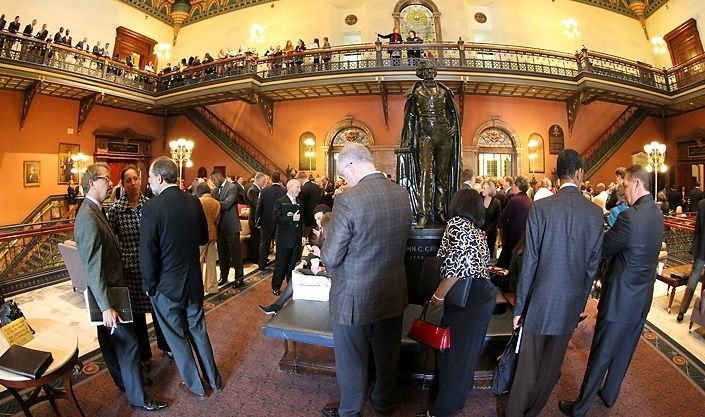 Palmetto State lawmakers will return in a few weeks to address a handful of disputed bills currently stuck between the two chambers – and vetoes from S.C. governor Nikki Haley – but the “people’s business” during this two-year season has been largely accomplished.

Or not accomplished … depending on your perspective.

Our view?  As they’ve done for decades (irrespective of party affiliation or ideological label), lawmakers doubled down on everything bad and did virtually nothing good over these past two years.

Bottom line?  They will leave their posts this week having spent more of your money than ever before in order to achieve worsening outcomes.

Anyway … that’s not what lawmakers and lobbyists were discussing as they celebrated the annual rite of sine die, which is Latin for “without day.”  Sine die is the date upon which lawmakers adjourn for the year – but the term has become synonymous with the raucous insider parties held in honor of the occasion.

The buzz at this year’s sine die?

A weeks-old dispute between a lobbyist and a lawmaker that multiple sources tell us nearly turned violent.

The alleged dust-up took place on Thursday, May 19 after the S.C. House judiciary committee convened a meeting in the aftermath of this debacle.

To say the exchange was “heated” would be an understatement.

“Dwight lost it,” one witness told us.  “Totally lost it.”

“(I’ve) been doing this thirty-six years and I’ve never seen the likes of that,” another witness said.

Things reportedly got so confrontational that several onlookers contacted the S.C. House Sergeant at Arms’ office – which provides security for members of the House.

“Security was watching,” one witness said.

Neither Drake nor McCoy were immediately available to comment on the exchange, but our sources say the dispute stemmed from a so-called “shoreline” bill impacting the latter’s house district – which runs along the coast of the Palmetto Lowcountry (map here).

Drake represents a wealthy developer looking to build a new access road in the district – a road it will be unable to construct without lawmakers’ amending the bill in question.

We don’t know the details of the debate, but Drake allegedly “got in McCoy’s face” and “stood over him and accused him of lying” related to the project.  Drake is also accused of “threatening” McCoy – although it’s not clear whether these threats were political or personal.

McCoy reportedly responded by reminding Drake he was a lawmaker and that the liberal lobbyist “couldn’t talk to him like that.”

One witness told us McCoy “deserves a ton of respect for how he handled the situation. Truly.”

In the aftermath of the dispute several lawmakers have told us they are looking to “blacklist” Drake – who runs the government affairs office at Nelson Mullins, arguably the state’s most powerful law firm.

“His clients could soon find themselves in need of new representation,” one GOP leader told us.

UPDATE: Multiple State House sources tell us that Kiawah Development Partners – Drake’s client on this particular piece of legislation – has severed its relationship with him in the aftermath of this incident.