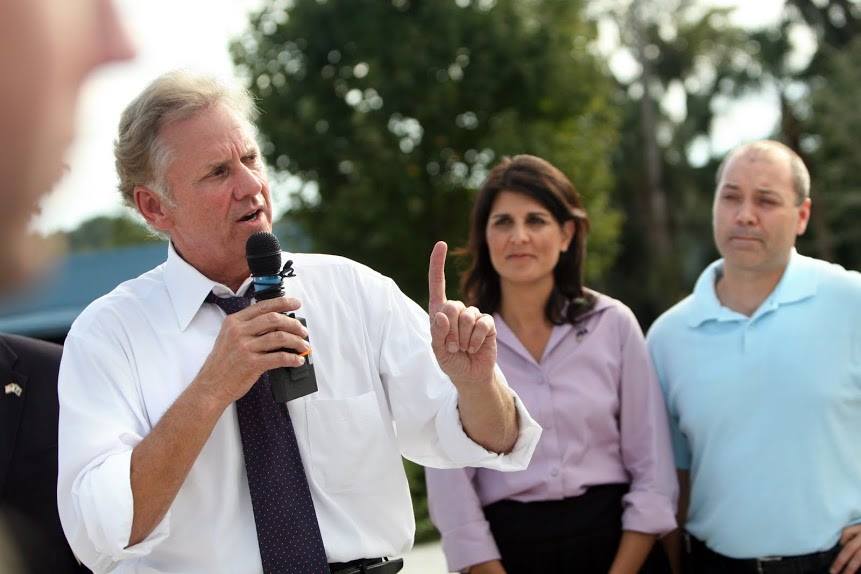 S.C. lieutenant governor Henry McMaster has never been the sharpest tool in the shed.  And as he’s gotten older, a lot of people have mistaken his rampant intellectual incuriosity and chronic mouth-breathing  for early onset Alzheimer’s.

Several S.C. Senators have also told us McMaster’s lack of situational awareness when presiding over the chamber has been a contributing factor to its elevated dysfunction in recent years.

For the record, we don’t think McMaster is senile.  For one to lose their marbles, there had to have been a point where they had them in the first place.

Over the last few days McMaster has bumbled, stumbled and fumbled into a starring role in the political comic tragedy we’ve come to refer to as “Probe-gate” (or #ProbeGate for the cool kids on Twitter).

“Probe-gate” is the saga of S.C. attorney general Alan Wilson‘s ongoing, unnervingly dramatic fall from grace.  It’s the sad tale of a one-time crusader against public corruption becoming the embodiment of the very evil he vowed to eradicate.

Or worse … it’s the increasingly unavoidable realization that Wilson duped all of us into thinking he was something he wasn’t, burnishing his image as a crusader by picking off those politicians who hindered the advancement of his neo-Confederate cronies.  Oh … and then actively sabotaging efforts to hold those cronies accountable when it became clear they were guilty of far worse crimes than the corrupt politicians he previously took down.

Of course we’ve been saying that for months now …

Anyway, into this very serious drama McMaster has waded … first as background scenery for Wilson’s disastrous press conference last week (a failed attempt to rationalize his behavior) and more recently as a participant in Wilson’s similarly botched effort to turn his shameful obstructionism into some sort of partisan pissing match.

The entrance of McMaster’s character has provided us with some long-overdue comic relief in this drama.  After all, it’s hard not to chuckle at the appearance of a man whose trademark guffaw has earned him the nickname “Foghorn Leghorn” around the S.C. State House?  Also, it’s entertaining to think about someone including McMaster’s dim bulb in some high-level political conspiracy, isn’t it?

This guy probably can’t even spell conspiracy, let alone participate in one.

McMaster offered a predictably ineloquent – albeit revealing – response to his participation in the failed politicization of this high-stakes legal drama.

“A whole lot of us were at a fundraiser for Rick Quinn Tuesday night, before the news conference on Wednesday,” McMaster told The (Charleston, S.C.) Post and Courier.

Hold up … a fundraiser for Rick Quinn?

Quinn, of course, is one of several state lawmakers Wilson is believed to be covering for by obstructing the investigation of S.C. first circuit solicitor David Pascoe.  Quinn’s firm also represents Wilson’s political interests – and McMaster’s political interests (most of the time).  Without even thinking about it, McMaster has laid bare the fundamentally incestuous nature of this scandal.

So … what went down at this fundraiser?

“There were a lot of people there,” McMaster said.  “I don’t know what everyone else was talking about.”

Foghorn doesn’t know what was said?  No shocker there … if McMaster has even the faintest inkling of what planet he’s on, it’s a good day for him.

The thick-accented, thicker-skulled “Republican” later told the paper he agreed to appear at Wilson’s press conference because he thought he would be standing up “for the authority and the integrity of the state grand jury.”

Most people’s read on this saga is that Wilson has usurped the grand jury authority he previously delegated to Pascoe – and in the process obliterated the integrity of the institution (perhaps deliberately).

While the high stakes battle over the grand jury heads to the S.C. Supreme Court (we think), there’s another drama involving McMaster to keep a close eye on … the political component to all this.

A little over a month ago, McMaster made a very public, very high-profile break with the Quinns when he endorsed the presidential campaign of GOP frontrunner Donald Trump.  One of McMaster’s closest long-time political confidants – Trey Walker – was very public in rebuking his former boss over that endorsement.

But did he protest too much?

Walker and McMaster have clearly reconciled … and McMaster’s appearance at Quinn’s fundraiser (and at Wilson’s press conference) suggests those fences have mended, too.

Sources tell us there may still be bad blood within this once tight-knit political family, and that bad blood may be one of the driving forces of this entire scandal.

Stay tuned for much more on that in future installments …

An older man approached an attractive younger woman at a shopping mall.

”Excuse me; I can’t seem to find my wife. Can you talk to me for a couple of minutes?”

The woman, feeling a bit of compassion for the old fellow, said, ”Of course, sir. Do you know where your wife might be?”

”I have no idea, but every time I talk to a woman with tits like yours, she seems to appear out of nowhere.”

The best Birthday card I ever got had two old guys sitting on a bench and one was crying, he said “I have a hot, young wife who can’t keep her hands off me.”. The other guy says ” So why the Hell are you crying? “.
The first guy sobbed “I can’t remember where I live! “.

Why the picture with Haley? Haley has spoken out in support for SLED Chief Mark Keel. Wouldn’t a picture with Trump have been more appropriate.?
Picture

LMAO!!! Maybe it doesn’t irritate him, maybe it excites him.

For those too young to get the comment, I offer a piece of retro Americana.

Safety in Numbers, when there actually is none. Its too late for them now. What is coming can’t be derailed, can’t be stopped, can’t be bought. As sure as the sun rises each morning, dozens of them are well on their way now to federal prison. The engine has been cranked and its running now.

Here’s an idea: Rather babbling incoherently, why not take Scoppe’s analysis of the facts and applicable law and tell us where she’s wrong? (That’s a rhetorical question. There are two reasons you can’t do it. First, she’s right and second, you wouldn’t have the intellectual capacity to do it even if she was wrong).

Irrespective of my intellectual capacity

Cindi Ross Scoppe makes a legal argument for her position. Just because something may be technically legal doesn’t make it morally right.

Even Ms. Scope’s legal argument is in error, however. She is wrong on the issue of recusal. I begin with several excerpts of the editorial.

The question of whether Mr. Wilson can have any involvement in a case where he has recused himself is trickier, because no statute directly addresses it.

And recusal is a voluntary thing, left entirely to the discretion of the prosecutor. In fact, when judges recuse themselves, it’s not uncommon for them to later unrecuse themselves.

Ms. Scoppe’s error is that only statutes and the Constitution govern in recusals. Common law and precedent also can determine whether the Attorney General can or has reversed his recusal. I apologize for not being able to find it now, but I read from a major state newspaper in the last couple of days that in a case where a judge in South Carolina tried to act in a case where she previously recused herself, that interference was denied by the courts and she was removed from the case and later lost her job because of it.

Not quite. The Court of Appeals affirmed a family court’s written decision NOT to recuse after she earlier indicated orally that she would recuse–subject to receiving briefs on the issue from the lawyers involved. She later lost her job, and that case hurt her there–but not because our appeals court shot her down. Quite the opposite.

Point taken, but Scoppe’s possition that recusal is entirely in the discretion of the person reusing themselves is wrong. Courts have made rulings requiring it as well as denying it.

I told you not to fuck with me!

When McMaster was the AG, I contacted him with proof of Jury tampering. He could have cared less and made NO effort to investigate, help with an investigation, or give any consideration to the crime.

Nothing unusual it runs so deep everywhere none of these folks we elect can stand up to it,

Leaked _____ the rats are running around in circles, trying to concoct a defense with total fabricated facts. This is attempt to protect the slimes in the legislature and their lobbyist. Too fucking funny. Their smartphones are being used as hot mics and cameras by feds? Hmmmmmmm?

That guy on the right…he also looks to be a little slow.

God Save America! Politics is nothing but scumbags screwing the working class in America. I am beginning to believe America can’t be saved from itself. I do not know personally but Fits must have some real inside connections and that is what it would take to strengthen America and South Carolina and take us out of the abyss we find ourselves in but the press is sold out to this corruption and they would take sic down before they allow him to go to far.We cannot be saved. It all boils down to Survival of The Fittest .