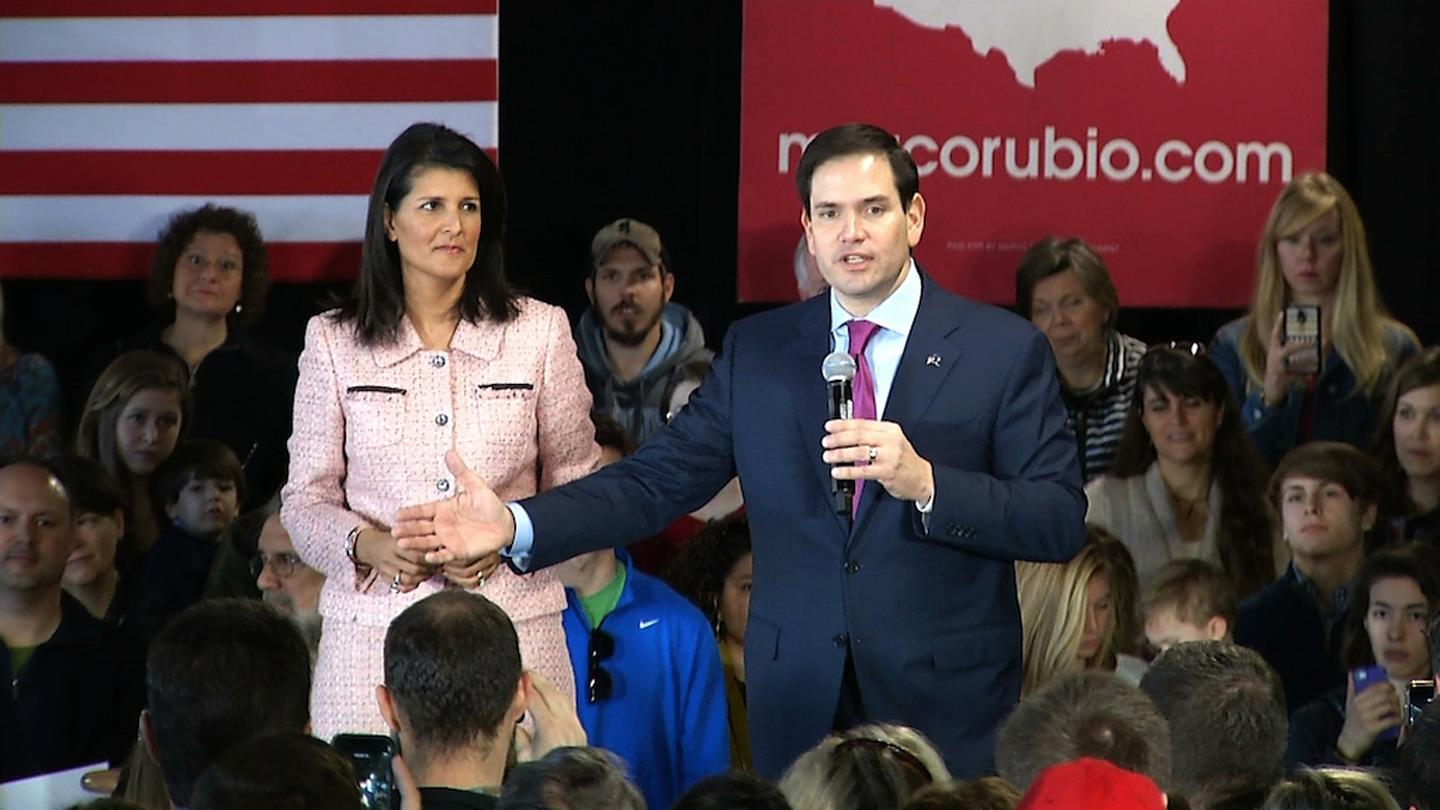 CAUGHT IN A BAD (POLITICAL) ROMANCE?

The short-lived and wildly unsuccessful political marriage between S.C. governor Nikki Haley and U.S. Senator Marco Rubio of Florida was always one of convenience – or to be more precise it was “arranged” marriage, one ordained by the powers-that-be in Washington, D.C.

Haley got to prance around on the national stage (poorly, at that) … while Rubio was ostensibly to get a big boost in early-voting South Carolina and other southern states.

Besides … who else was Haley going to endorse?

Obviously there were serious problems with the relationship long before it was cemented … not to mention serious questions about it after-the-fact.  So when the relationship failed to yield fruit, it’s not surprising the recrimination wasn’t long in coming.

And when Haley started showing her support for another candidate less than 24 hours after Rubio’s ignominious exit from the race … things got heated, fast.

The first shot across the governor’s bow?

A message from a former Rubio supporter that came to us less than an hour after Haley signaled her support for U.S. Senator Ted Cruz of Texas.

“You know we vetted her as a vice president,” the Rubio backer told us. “Wanna know what we found?”

Another ex-Rubio aide confirmed to us that Haley was indeed vetted by the campaign – and that the results of the exhaustive research confirmed concerns raised about her years ago.

“There’s no one silver bullet,” the aide said, pausing for dramatic effect. “There’s a full metal jacket of silver bullets.”

The source also told us that the shiny happy narrative of Haley’s endorsement of Rubio – breathlessly related to the public by Politico reporters Shane Goldmacher and Anna Palmer – was pure propaganda.

Apparently it was anything but a cordial process …

Specifically, Haley refused to be in the presence of Rubio’s national campaign manager Terry Sullivan or his “digital maestro” Wesley Donehue, two veteran Palmetto state politicos she still blames (rightly, to some extent) for the release of details regarding her extramarital affair with the founding editor of this website.

In fact Sullivan – in addition to being barred from traveling with Haley – was reportedly forced to leave Rubio’s campaign office whenever the governor visited.

“We made him go hang out at a coffee house for a few hours,” our source related.

Stay tuned … this political breakup appears to be getting very nasty, very fast.

@fitsnews yea I saw that coming lol. It's so funny how fast she was to endorse Cruz, she only uses you when she needs ya.

“You know we vetted her as a vice president,”
Imagine what would have happened if that same group had vetted Hillary for President.
It would not have been pretty.

A few beers and I would throw more meat in that than grandma has in the smokehouse.

She is a loser, she is sinking fast, and she is trying to hold on to anything as in the Titanic. They will use her, but the words is out that she is poison.

She is a loser and a user. Probably used Larry, Will and God knows who else, when Michael was not around, or available. Typical of Lexington County mouth breathing Republicans!

I read where Will apparently likes to beat on women (CDV conviction).Is he a pedophile with all those kids?

How’s the weather in Ohio?

Don’t talk about Yellow Springs. Mention Yellow Springs and he gets even crazier than usual. I don’t know why. I don’t think he’s from Yellow Springs. But it’s a trigger for something. He starts all that shit about how you are stalking him, defaming him, etc., and you can expect to be sued. Then he threatens to leave the blog and never return. But he always does.

Stay out of it.

Call Attorney Fannin or whatever and tell him to sue me immediately. I’ll die of old age waiting to be served, of course. btw, maybe you really are from Yellow Springs. Proved you’re actually a total leftie. It is a requirement to be a citizen there, I think.

In 1979, Yellow Springs held the distinction of being the smallest municipality to pass an ordinance prohibiting discrimination based on sexual orientation.

Going back further, I can remember when the local barber got in trouble for claiming to be unskilled at cutting the hair of “negroes”.

It’s the coolest town in OH, in my opinion. I love it.

Is that a reference to an actual place or does he have a golden showers fetish? LMAO!!!!!

Yellow Springs isn’t far from Clark County so maybe he does live there.

Buzz, thank you for mentioning that. I think J.Smith is slowly but surely going to be the key to his own demise much like GrandTango was. He is going to lead a trail of breadcrumbs and eventually a troll is going to follow it right into figuring out who he is.

He seems to understand decorum better than GT, so there might be a lack of interest by trolls.

GT was the very definition of troll, unlike the gentleman you’re referring to who is a “true believer”.

GT was a troll who was eaten by a bigger and badder troll. It was a form of cannibalism.

I think’s they’ze the same person.

Could be, who knows. I hope not. Someone said they heard GrandTango on the radio the other day so I would hope that he learned a lesson about being a jerk on the interwebs and just went back to living a normal, respectable life. Then again I tend to be too much of an optimist sometimes, but I like to see the good in people even if there’s very little of it there.

In a similar vein I really do hope J.Smith finds Christ and betters himself. Life is too short to be constantly angry and hateful towards people you’ll never meet over silly stuff.

Nope. He’s not Terry. Just someone who adores him beyond all reason.

Sun is out.Call the Clark County, Oh Sherrifs Department and they explain your warrant to you.

Lol…I prefer our home in Wellington ,Fl however still have some family that needs us and rental properties that do well.Lots of family members in law enforcement, sis works for Feds and state attorney general is my neighbor. How can life get any better than that? :)

So your family mooches on Gubermint jobs?

He’s got a trailer out there I’m sure.

B) The Clark County Clerk of Courts lists no filings listing FITS, let along Flip, Pogo, Sandi, Tango. They do however, have prior Stalking compliants filed by petitioner L Ward, dating back to 2002.

Who would want to stalk GrandTango? Eww gross!

If they have a warrant for me why do I have to call them? LMAO!!!

@ the guy with his head buried in Nikki’s crotch in the photo, how’s Marco’s dick taste?

Don’t answer, I don’t really want to know. It was a rhetorical question.

Look you idiots who might believe this crap, if the stories were true about refusing to be in the presence of Rubio’s staff, there are plenty of respectable Rubio enemies in the media who would publish it and a lot of staffers would have to know the story.

Second, why would Rubio supporters be bent out of shape about a half hearted endorsement of Cruz after Rubio dropped out. The truth is they are aappreciative of her effort?

Third, do you really believe that Rubio’s staff was vetting vice presidential candidates this early in the process with success so unlikely? Wouldn’t you think that if this was true, that Fits would ask who came out ahead in the vetting? No, Fits is just obsessed with Haley, not interested in the vetting at all.

What purpose would be served by bringing this story to Fitsnews unless it was people who already had a grudge?

This is just Will’s hate. The story makes no sense. Read between the lines. Notice the glaring omissions in this story that leads you to logically question its motivation.

And you make such a convincing augument.

It really is a great day in SC! She looks so stupid.

I don’t believe that any reasonable person could look at the totality of Haley’s political career and reasonably think that she would pass a vetting process with flying colors.

I don’t believe that any reasonable person could look at the totality of this article and reasonably think that the Rubio campaign put people though a vetting process in February and March.

Maybe they didn’t have to dig but a few inches to find the skeletons she was hiding?

Or maybe it is a hit piece by someone who has a grudge against Haley.

I won’t write that possibility off but Haley is still pretty shady herself.

Exactly. This is the kind of gossipy little piece with anonymous sourcing – if not totally invented – that FITS loves to publish.
But, Nikki Haley’s public life is full of examples of her highly manipulative, deceitful behavior going back to her breathless complaints to Cindi Scoppe about Bobby Harrell ‘demoting’ her from the commerce committee to education, to her genuine ethics violations that were white washed by the House ethics committee after she threatened her fellow pols with disclosing what she knew about them, i.e., she publicly blackmailed them into performing the white wash.
Voters don’t seem to understand the level of corruption related to those ethics violations. She was a sitting legislator acting as the unregistered lobbyist for 2 businesses.
I do not care who Nikki Haley has screwed. I care that she has screwed over the people of SC time and again.

That could be it. You’re the only one in the state that likes or cares about her.

No. For obvious reasons, I’m one of the few of her many supporters willing to visit this blog.

I respect your opinion, nothing personal.

Her children must be so embarrassed.

I have a tough time believing that anyone in the Rubio camp would give any scoops to a blogger who 1) claimed Rubio had a mistress 2) Rubio was gay.

Haley: OK, here’s the deal. I’ll endorse Rubio and that will ensure he will be a goner here in South Carolina because I am so despised and hated by so many people. Then when you get the nomination I’m your pick for the VP spot.

Cruz: Yes, even though you may be the daughter of Satan, I will dance with the devil to achieve MY DESTINY..!!

Rubio is out. Haley is not going to be VP….What was left to “Break up?”

I warned you previously! Her affair with Will Folks was the talk around the Capitol in 2007!
She was a nobody. A first year second term below average legislator who, NO ONE saw as anything else. Why make up a loosey goosey reputation? It was NOT made up!
Look at how she has lied. She has been caught in lie, after lie!
Haley is a looser. Glad they found out, before too late.

Several went to the hairy fismarket while the peeppin husband was in army training.

She is so desperate. …Kirk tell her to go make you a samich…..

Like a dog under the buffet table. Please throw a scrap, sir. I’ll do any trick you want me to do.

“Wanna know what we found?”

Nothing that Will hasn’t seen already. LMAO!!!

“Headed for a bad breakup” is another example of how they are the future of the Republican Party in the Trumpian Era.

Whatever her faults and past transgressions are, her instincts for Tard Terry and Bow-tied fag Weasel Donehue, are accurate. Those 2 are first class incompetent scumbags.

I don’t think the hot yoga is helping.

Interesting, I guess, but the truly laughable thing is that the Rubio campaign was vetting VP candidates. Like Rubio was ever going to be selecting a VP, right?